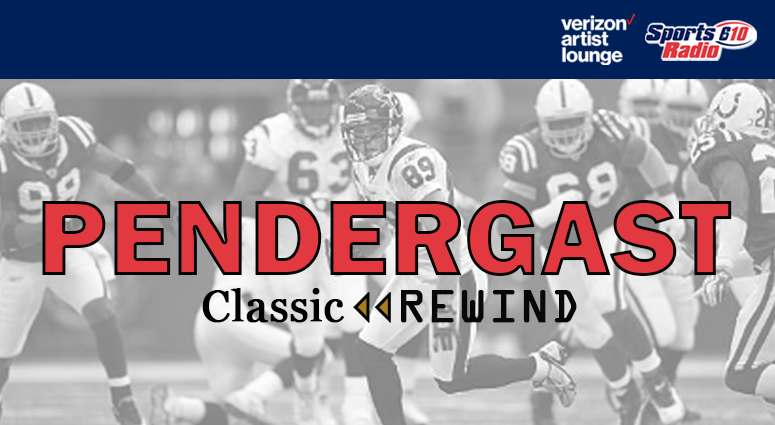 Coming off of a 2009 season where the Texans won their last four games of the year, to go from 5-7 to 9-7, including a win over the New England Patriots in Week 17, it felt like 2010 was going to be the year the team would finally break through and make the postseason.

We all know how 2010 ended, though. The offense was pretty good, the defense was an abject disaster, and the only thing that saved Gary Kubiak’s job was his willingness to welcome Wade Phillips onto his staff as the defensive coordinator in 2011, a move that worked out better than any move in the history of the franchise (this side of trading up for Deshaun Watson).But before 2010 started to spin into the toilet, a slide that began shortly after DeMeco Ryans shredded his Achilles in an October game against the Chiefs, hopes were high! And the 2010 season opener did nothing to dampen that euphoria.

The defending AFC champs, the hated Indianapolis Colts, came to town for a Week 1 matchup, and the Texans led them wire to wire in defeating them 34-24.I recently did a full rewatch of this game (half of it with former Texans WR David Anderson in the Verizon Artist’s Lounge on Facebook Live), and I have a few thoughts to share.
Here we go:1. This game is probably best known as the authoritative Arian Foster announcement of his presence as an NFL workhorse running back.

On this afternoon, Foster rushed for 231 yards, and here’s the thing — Foster was impressive for the first three quarters, dicing the Colts up for what felt like about six yards every carry, piling up 106 yards. Then, in the fourth quarter, he unleashed holy hell on the Colts’ defense, stacking another 125 yards on them in the final stanza.

This would not be a flash in the pan. Foster would go on to gain over 2,200 yards from scrimmage in 2010, and have a three-year run where he was neck and neck with Adrian Peterson for the best back in football.
Brett Davis-USA TODAY Sports

2. This was a rough first week for the Texans’ defense, and maybe the end result of this game masked some holes that would eventually turn into gaping canyons on defense.

This was the first of four games that Brian Cushing would serve for a PED suspension. You all remember, right? That time where Brian Cushing, whose test was triggered by a substance found in only pregnant women and cancer patients (and PED abusers), claimed he was concerned he might have cancer?

Well, the nicest thing I can say about this is at least he didn’t claim to be pregnant.3. Texans Defense Pending Disaster, Part II — if you rewatch this game, avert your eyes late in the first quarter, when outside linebacker Connor Barwin gets his foot turned around backwards under a small pile of humanity, one of the most gruesome injuries in Texans history.

They called Connor Barwin's injury lower leg. That means he's blown out his knee or has suffered a fractured fibula like RB Ben Tate.

Considering what Barwin became for the Texans the following season -- a double digit sack guy -- in retrospect, Barwin’s injury might have been as big as Ryans’ eventual injury.

Keep in mind, this is the season BEFORE J.J. Watt arrived in Houston.

Not the good kind of “bad”, like Michael Jackson’s “Bad”. I’m talking about bad as in horrific, underwhelming, disastrous.

If Pierre Garcon didn’t have cement for hands in the first half of this game, it could have been worse for Jackson, and make no mistake… it was bad already.

Johnathan Joseph’s arrival in 2011 would help Jackson tremendously. In fact, signing Joseph was like signing two players really, considering how instrumental Joseph was to Jackson’s eventual development.
Photo by Ronald Martinez/Getty Images
5. This game was a great microcosm of the circus that Jacoby Jones was for this team.

In the first quarter, he is ripping off 39 yard punt returns, and making key third down catches. Then in the second and third quarters he is dropping passes over the middle.

I wish Jacoby Jones was a better, more consistent football player as a Texan, because as a human being he was a hilarious, very easy-to-root-for kind of guy.
Photo by Bob Levey/Getty Images

Keep an eye out later today on my Twitter feed for the poll for next week’s Pendergast Classic Rewind!

news
Parents name their daughter after internet provider to get free WiFi for 18 years
sports
Multiple teams reportedly interested in Antonio Brown, including Seahawks
music
Join the Country Music Hall of Fame's 'BIG NIGHT (At the Museum)' fundraiser
sports
Marcus Stroman seems to think the Yankees need him: 'Their pitching always folds in the end'
news
These 2020-inspired Halloween decorations are perhaps the 'scariest' of all
news
3 members of same family die of COVID-19, 5 more sickened