The 2020 NFL Draft is approaching and the mocks of what teams should do are out in full force.

But predicting the right selections for each team in the NFL Draft is hard. Nobody knows for sure how each player will translate into the NFL. Tom Brady, for instance, was a sixth-round pick. While mock drafts may have been less prevalent in 2000, nobody was projecting him as a first-rounder.

On the flip side, Ryan Leaf was the second overall pick and lasted four seasons in the NFL.

While predicting what teams should do is hard, looking back at what teams should have done is a little easier. A year ago, many were debating whether or not Kyler Murray deserved to be the No. 1 pick, if Daniel Jones was worthy as a first-rounder and if D.K. Metcalf was nothing more than a combine star.

With hindsight as an advantage, let's take a look at the top 10 picks of the 2019 draft and what should have happened based on what we know now: 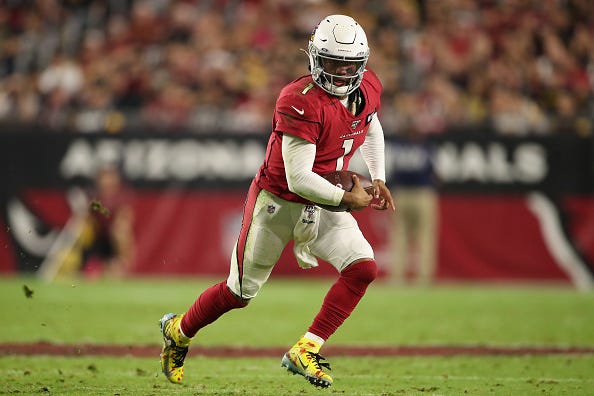 There should be no complaints here. Kyler Murray showed flashes of why he rose up through the draft boards after deciding to forego an MLB career. Murray was the 2019 Offensive Rookie of the Year with 20 passing TDs and four rushing TDs, in addition to 4,266 all-purpose yards. He is a true dual-threat quarterback and has a bright future in Arizona, especially with DeAndre Hopkins joining his receiving corps. 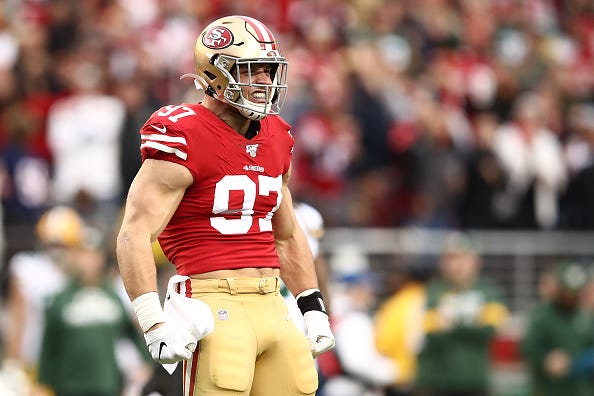 Some may still argue Bosa should have went No. 1 overall in this draft, but the Cardinals had a greater need at QB. The edge rusher out of Ohio State may have had the biggest impact on his team more than any other rookie. Bosa racked up nine sacks with 47 tackles, including 16 for a loss, and had an interception, forced fumble and two fumble recoveries en route to being named Defensive Rookie of the Year and a key cog in a Niners defense that reached the Super Bowl. 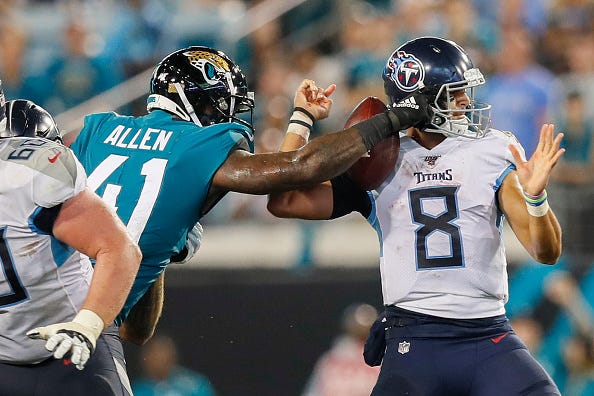 Here we go: the first "mistake" of the draft. The Jets decided to play it safe and go with the dominating presence at the front of the defensive line in Alabama nose tackle Quinnen Williams. It was not necessarily a bad pick, but there was a better one to be made. Kentucky edge rusher Josh Allen lived up to his billing as an athletic freak his rookie season, finishing with 10.5 sacks, 42 tackles, including 11 for losses. Allen, playing opposite of Jordan Jenkins, would have given the Jets one of the most formidable linebacking corps in the league. 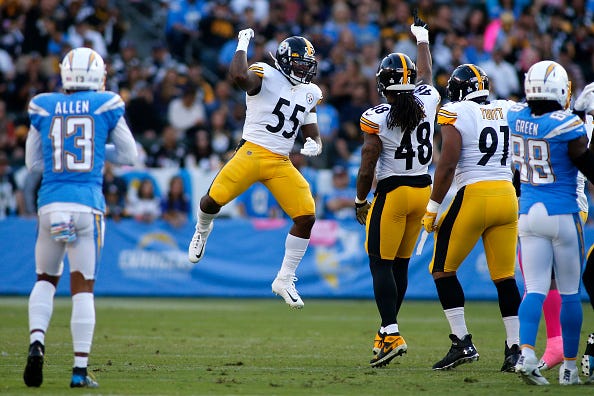 The Oakland Raiders confused everybody when they decided to take Clemson defensive end Clelin Ferrell fourth overall. Ferrell was decent his rookie season, but Oakland had three first-round picks and could have waited on him. Devin Bush out of Michigan would have been a much better pick in this spot. Bush was a machine in the Steelers defense last season, accumulating 109 tackles — which would have led the Raiders defense last season — two interceptions, a forced fumble and recovering four fumbles, including one for a TD. 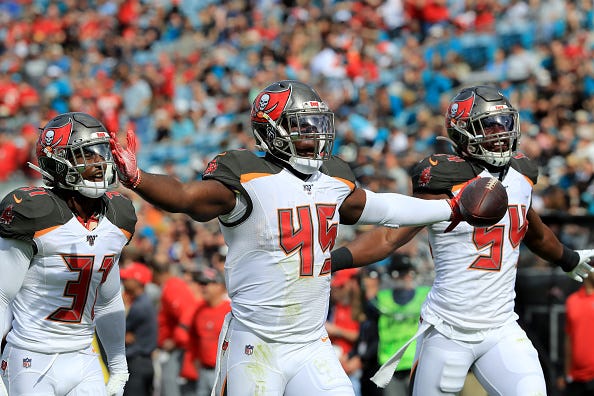 It could be argued that the Bucs could take a quarterback here, in retrospect, but that seems to be working out pretty well for them at the moment. There may have been some better defensive players available at the time, but Devin White was a safe pick, and he is the best pick in the redraft.

The linebacker had 91 tackles, 2.5 sacks, two interceptions, three forced fumbles and proved to have a nose for the ball, too, recovering four fumbles and returning two of them for TDs in his rookie season. 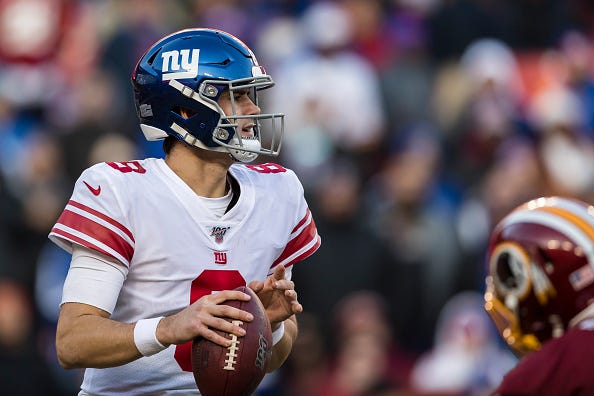 Giants fans booed this pick and it was criticized all summer long as an immense reach for an unproven college quarterback. Yet, Jones quickly won over the hearts of fans inside MetLife Stadium and showed glimpses of his potential — leading all rookie QBs with 24 TD passes.

While Jones may have shown more potential than Dwayne Haskins — the QB many thought he should have been taken over him — he still has to cut down on his turnovers as he enters his sophomore season in the NFL. 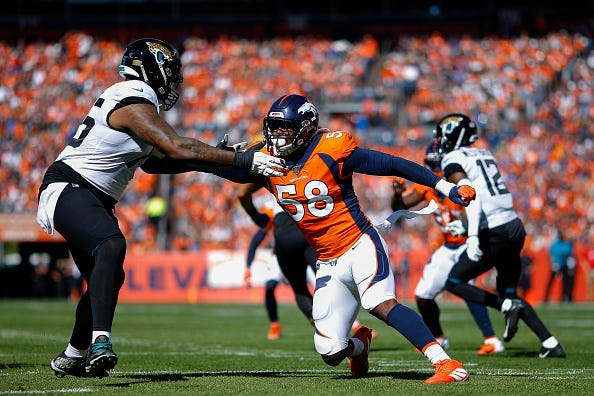 The Jaguars had a gold mine fall into their lap with Josh Allen in the original draft, but in a redo they are not so fortunate. With Allen off the board, the Jaguars likely trade down, but in this scenario opt to beef up the offensive line with offensive tackle Jawaan Taylor.

The Jaguars actually landed Taylor in the second round, yet another steal in this draft, but in this instance they reach for him in order to fill a need in the trenches. 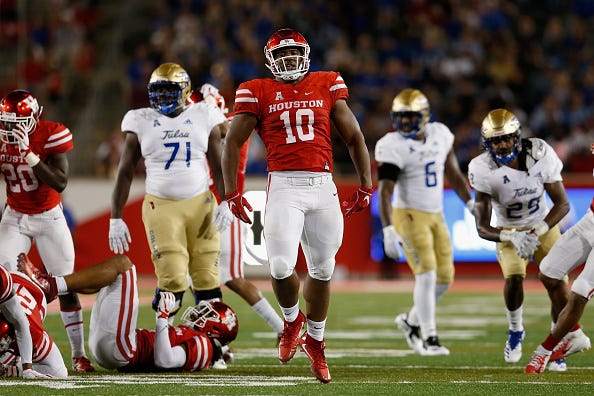 T.J. Hockenson could very well blossom into a fine tight end in this league, but his rookie season was hampered by injuries and did not have the type of impact in the offense many thought. Ed Oliver, on the other hand, was a force in the Bills front line. The defensive tackle had five sacks, eight QB hits and 42 tackles total — which would have been nice for a Detroit defense that failed to get much pressure on the quarterback in 2019. 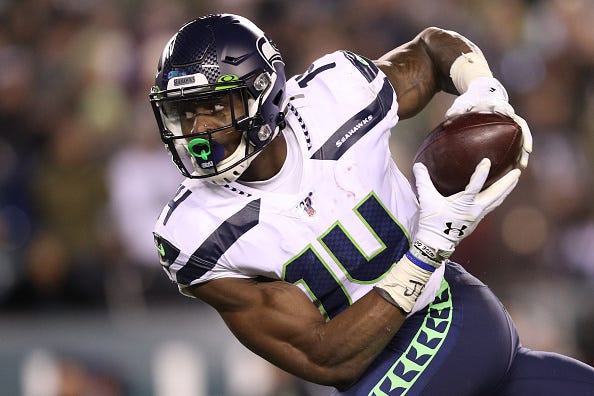 Oliver was a solid pick for the Bills, but with the defensive tackle off the board in a redraft, the Bills turn to fill another need in their receiving corps. D.K. Metcalf fell to the late second round, but proved in his rookie season that teams underestimated him. Metcalf had 58 catches for 900 yards and the 6-foot-4, 229-pound receiver would have been the perfect target for Bills QB Josh Allen, whose receivers lacked much size in 2019. 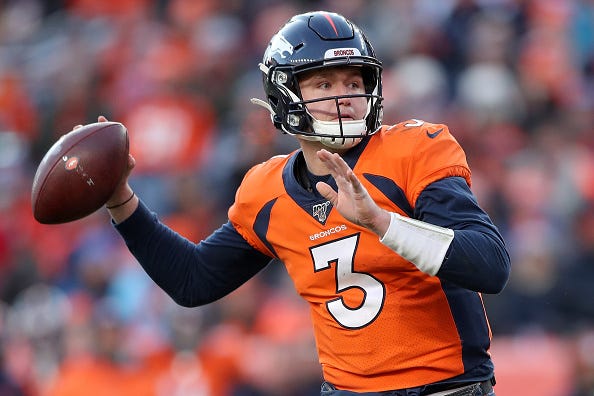 The Broncos originally traded out of this pick and were able to secure Lock in the second round, but in a redraft there is no Devin Bush available for the Steelers, or any team, to want to leap ahead to this spot. Knowing that Haskins still has a lot of work ahead of him, it is possible the Redskins eye Lock at 15, so the Broncos stay put and take their guy with the 10th overall pick.

Lock played in just five games as a rookie, but went 4-1 and threw for 1,020 yards, seven TDs and just three interceptions. He struggled at times, which is expected for rookie QBs, but Lock showed some promise as the Broncos try and figure out if they indeed have a franchise quarterback.