For nearly all of the 2020 NCAA Football season, much of the world's focus was on Clemson quarterback Trevor Lawrence. And for good reason - Lawrence is the most intriguing quarterback prospect since Andrew Luck.

Still, Lawrence, barring catastrophe, is an open-and-shut case in many senses. Clemson was upset by Ohio State in the Sugar Bowl, and the quarterback has since entered the NFL Draft. It would be the shock of all shocks if the Jacksonville Jaguars don't use the No. 1 overall pick on him in April's NFL Draft.

For some of the most notable players on Ohio State and Alabama - who will play in the College Football Playoff National Championship - the story is still being written, to some degree. Monday evening, not only will the two teams meet on the highest stage in collegiate sports, but some of the key players on each team could very well affect their draft status.

Here are seven notable players that you should see in tonight's game, and where they could be playing in the NFL a year from now: 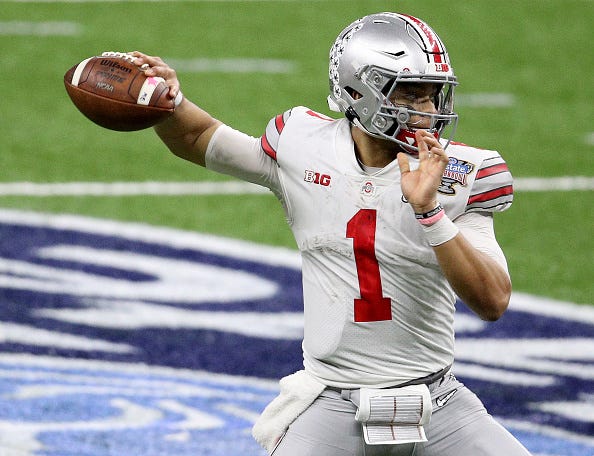 It remains to be seen how general manager Joe Douglas - and the eventual new head coach in New York - feel about Sam Darnold moving forward. Things really become interesting if the Jets elect to proceed with Darnold, as opposed to drafting a quarterback. In our RADIO.COM Sports NFL Mock Draft, we have the Jets taking Fields with the No. 2 overall pick. If the Jets pass, or are willing to trade the pick, any of the Dolphins, Falcons, Eagles or Lions could be fits. Perhaps the biggest wild-card scenario is the idea of the Texans trading Deshaun Watson to a team like the Dolphins and ending up with a top-five pick. In that event, assuming he's still on the board, one would think that the Texans would have interest in Fields. 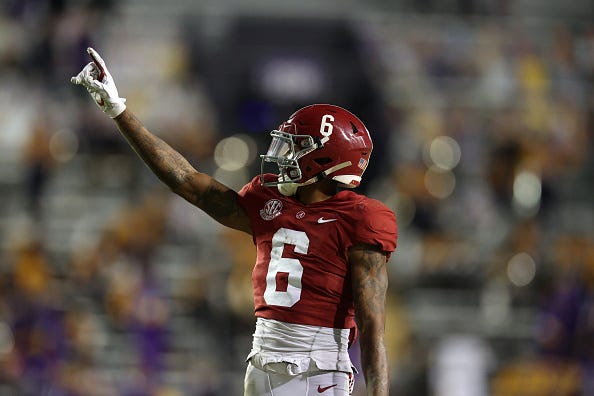 Smith, the 2020 Heisman Trophy winner, had 105 catches for 1,641 yards and 20 touchdowns this past season. It will be interesting to see if he's the first wide receiver off the board, or if former LSU wideout Ja'Marr Chase - who opted out of the 2020 season, but had 1,780 receiving yards and 20 touchdowns last year - goes first. Either way, both will be top 10 picks. If the Dolphins are committed to Tua Tagovailoa at quarterback, they could consider Smith with the No. 3 pick, though we've mocked them taking Oregon offensive tackle Penei Sewell. At pick No. 5, the Bengals could add Smith, hoping to form a dominant one-two punch with Tee Higgins for Joe Burrow. The guess here is that the Eagles, at pick No. 6, will end up with either Smith or Chase, whichever one isn't taken by the Bengals. The Lions, at pick No. 7, could make sense considering they may lose Kenny Golladay and Marvin Jones Jr. this offseason, though he'll probably be off the board by the time they pick. 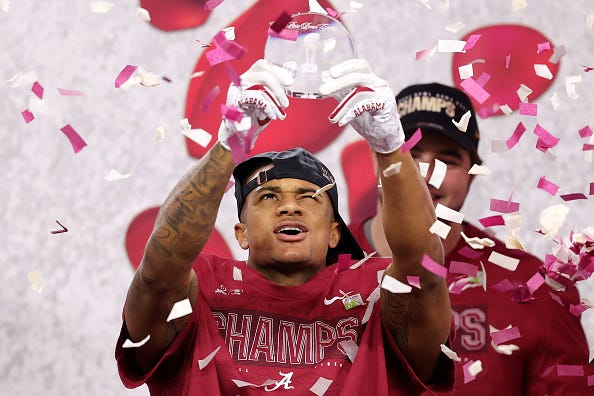 Surtain II is the top cornerback expected to be available in the 2021 class, it's just a matter of how quickly teams will prioritize selecting a potential lockdown corner. In our latest mock, the Bengals, Eagles and Panthers go elsewhere with their top picks, but all should absolutely consider Surtain II, the son of a former NFL All-Pro. Currently, we have Surtain II being selected by the Broncos with the No. 9 overall pick. At No. 10, the Cowboys would love to draft Surtain II to replace last offseason's loss of Byron Jones, though landing him may require moving up a few spots. 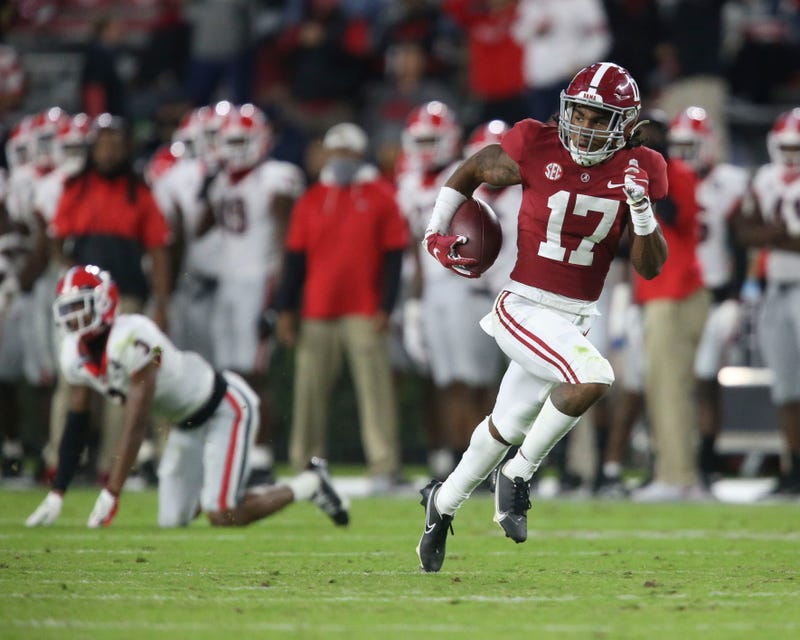 Waddle, per Nick Saban, will be a game-time decision as he looks to return from the fractured ankle he had surgery on late in October. For much of his collegiate career, Waddle has been blocked by other NFL talents, such as Smith, Jerry Jeudy and Henry Ruggs III. Still, in the five games he played this season, he had 25 catches for 557 yards and four touchdowns, which comes in addition to his ability to return punts and kicks. Even though his career statistics at Alabama may not suggest this, with context, it's clear that Waddle is a first-round talent. It's hard to get a feel for where Waddle will go, because so much is dependent on how quickly Chase and Smith are off the board. We currently have him going to the Patriots at pick No. 15, though the guess here is he goes earlier once trades are factored in. 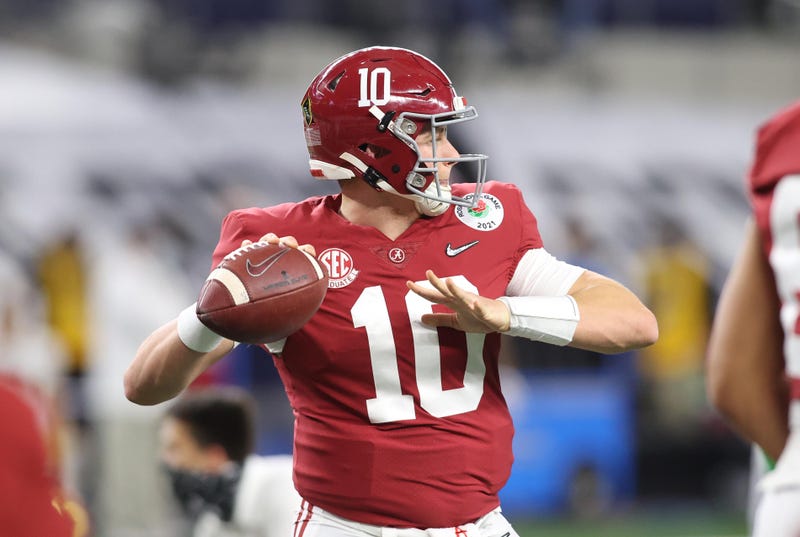 With Trevor Lawrence, Justin Fields, Zach Wilson and Trey Lance all potentially rated higher than him in the 2021 NFL Draft class, Jones does still have the possibility of returning for his senior season at Alabama. However, after tossing 36 touchdowns to just four interceptions while racking up over 4,000 passing yards, his best bet seems to be entering the draft. A deep quarterback class could actually work in the favor Jones, as he could end up with a team like the Colts, Steelers or Saints, who have playoff-caliber rosters, but could be looking to replace Hall of Fame-caliber quarterbacks. 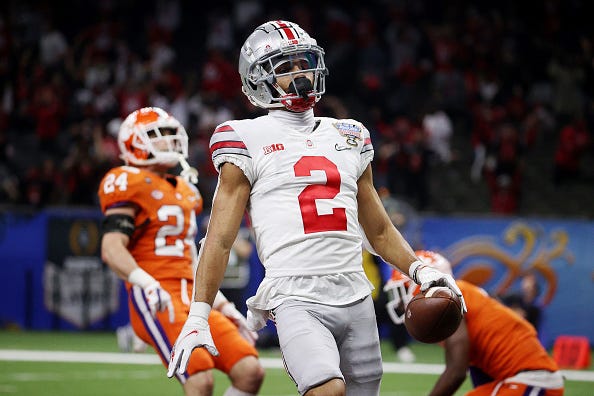 In six games this season, Olave has 42 receptions for 660 yards, good for an average of 15.7 yards per reception. He's in the mix to be the fourth receiver off the board, following Chase, Smith and Waddle. ESPN's Todd McShay currently projects that the Jets will use the No. 25 pick, obtained in the Jamal Adams trade, to select Olave. That would be an especially intriguing selection if the Jets take Olave's current Ohio State teammate, Fields, at No. 2 overall. 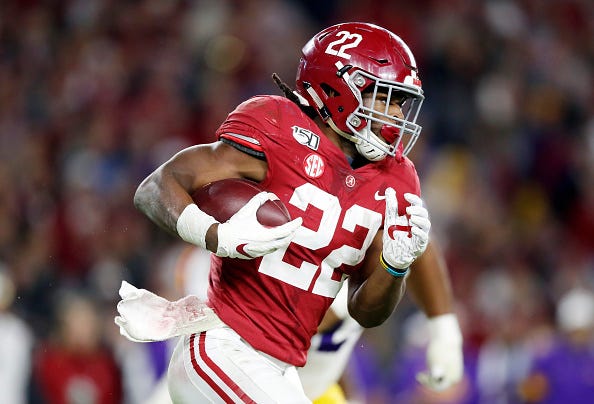 Clemson's Travis Etienne will likely be the first running back selected in the 2020 NFL Draft, though Harris could sneak into the first round or early in the second round. In four seasons at Alabama, Harris has averaged 6.1 yards per carry, and would be a welcome addition to a team hoping to contend in 2021.