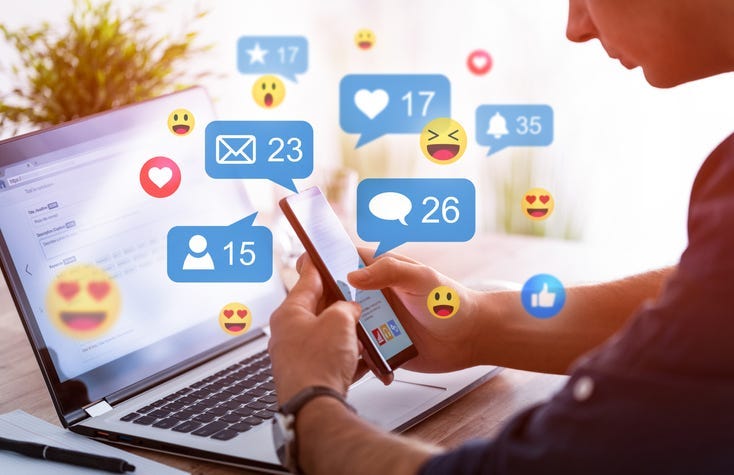 Have you seen The Social Dilemma on Netflix yet?

If you haven't, it talks to tech-giants at Google, Facebook, Pinterest, and more, and how they have inadvertently manipulated society...And increased the need for our social media reliance..

The inventor of the like button wanted to spread positivity, and yet look how we've all become dependent on it. They make us feel good and they make companies wallets feel good, too.

I mentioned a while ago that Steph does not do social media. Once in a great while, but certainly not to catch up on what drink you got from Starbucks, what your feelings are on the election, or how you're so stressed from the kids doing at-home learning. She's not being rude, she just chooses to live in the moment instead.

My daughter on the other hand, is happiest when a Tik-Tok video she posts gets a certain number of likes. "Dad, I got a thousand views!"

The bottom line to all of this, is that you need to look at your social media reliance and see if it's fueling some sort of need, and determine if that's a healthy need or not.

When used and viewed correctly, it's a tremendous tool for connecting with people, being inspired, learning new things, and getting a new dad joke for the dinner table.

Sidenote..I'm trying to play the new official Rick Astley board game..But the instructions just say ‘You know the rules, and so do I”

But, when used and viewed incorrectly, it causes jealousy, anxiety, anger, and self-esteem issues.

Look at your likes..Do you even care, or does it knock you down because there weren't enough?

Look at what you post...Do you have an agenda? Are you complaining about your job, those that wear masks and those that don't, the teachers in your district and how they don't give your kid enough work? Are you mainly a passive aggressive keyboard warrior? I get the need to vent, but why publicly? If you're truly about change, wouldn't you go to the source that could actually change things? Your senators, mayors, bosses, and teachers?

And maybe its all a slippery slope. We love to see pictures of cute babies, but somehow have to ingest the constant political posts to see them. We wanna see the cursive feel-good quotes, but have to endure those that think we wanna see their bunion..from multiple angles..close up....

Make a pros/cons list. If Facebook's pro's don't significantly outweigh the cons, delete it. I had a woman email me and said she only logs on to read my blogs. Sweet, but I'll email them to you, just ask. Glenn@star102cleveland.com.

Social is like moonshine. Take a sip at your next social distant gathering. Say things like "Wow, it really does taste like apple pie". Laugh, talk, share stories, debate the moon-landing, and The Beatles versus The Stones..(Beatles)

But, if you've become reliant on moonshine to function, if you've stopped eating actual apple pie, if you're the angry and belligerent person at the backyard campfire...If you're threatening those that aren't flying their Paul McCartney flag from their pickup truck..It's time to delete the moonshine app.