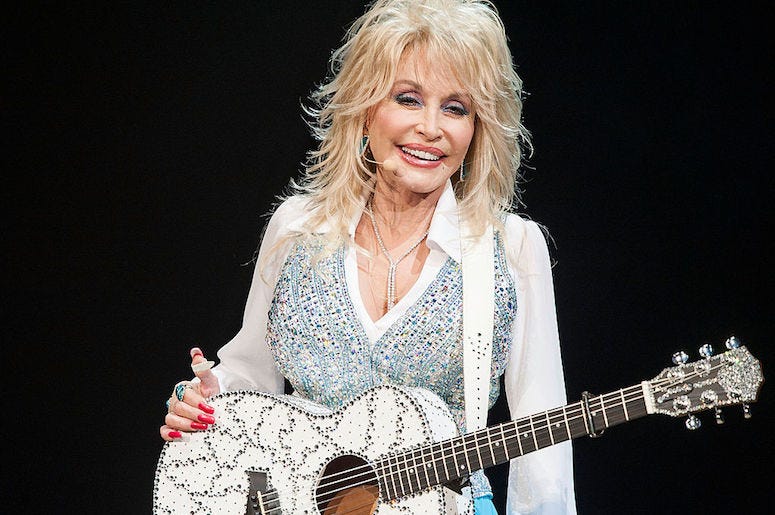 Celebrations are in order as Dolly Parton celebrates her 75th birthday!

If Dolly’s 75th trip around the sun is anything like the previous year, humanity will be better off for it. This past year, Dolly helped fund the Moderna COVID-19 vaccine, saved her 9-year-old co-star from an oncoming car, auctioned off personal items to help support suffering industry workers, released her first Christmas album in 30 years, and starred as a literal angel in a Netflix movie.

What’s next for the Country icon? Well, if Dolly follows her word, she might be rehashing an iconic photoshoot from earlier in her career.

Back in October, she told BBC Radio 5’s Scott Mills & Chris Stark Show that she wanted to celebrate her 75th birthday by posing for Playboy.

"I just might do it,” Dolly told the hosts. “If I can do it in good taste and they [Playboy] want it, we'll do it along with a really good interview inside."

Dolly first appeared on the cover of Playboy in October 1978 when she sported a classic bunny costume and necktie. “It’s possible,” she said. “We’ve talked about it.”

“Well, I don't plan to retire. I just turned 74!“ With her signature charm and unique voice, it’s so easy to see why fans will always love @DollyParton #60Mins pic.twitter.com/RlPme7tumJ

That wasn’t the first time Parton expressed her desire to pose for Playboy when she’s 75. In March 2020, she told 60 Minutes Australia “I plan to be on the cover of Playboy magazine again.”

“See I did Playboy magazine years ago and I thought it’d be such a hoot if they'll go for it — I don't know if they will — if I could be on the cover again when I'm 75."

While Dolly hasn’t officially confirmed her desired plans, it does appear the ball is in her court. Back in November, it was reported that Playboy agreed to a photoshoot and was merely waiting on Dolly to approve.

A source told OK! magazine that Parton has someone in her corner who has been an ardent supporter of her Playboy shoot. Her goddaughter, Miley Cyrus.

"'Miley made me do it,' is what Dolly's been jokingly telling friends,” the source told OK!.

WATCH MORE: 5 reasons why Dolly Parton is an American Treasure