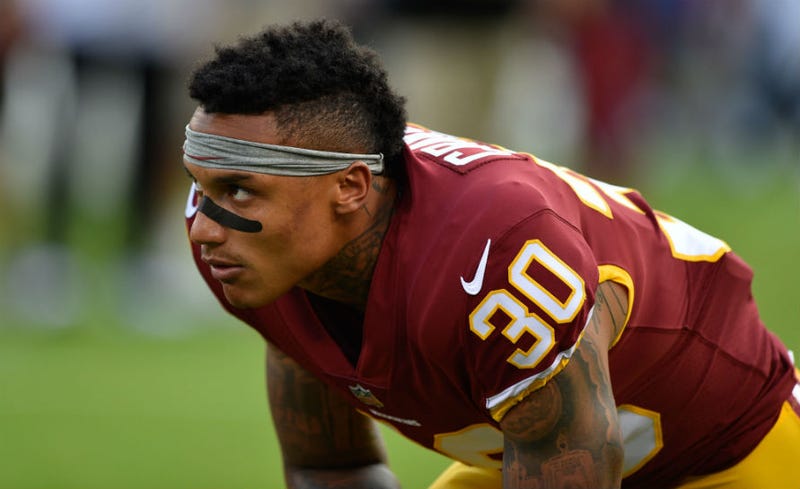 (106.7 The Fan) -- Former Washington Redskins safety Su'a Cravens accused the team of mishandling injuries and withholding information in a series of tweets Monday.

"2 years later and I’m still fighting the Skins on something they’ve continued to do countless (times)," Cravens wrote at the start of a five-tweet thread about his former team.

Cravens tied his experience with the organization to current Redskins offensive tackle Trent Williams' holdout. "Which is why the best tackle in the game refuses to play for them now. Same reason I left. Mishandled injuries and withheld info. All evidence points to them being guilty!" he tweeted.

Cravens, a second-round draft pick in 2016, played 11 games during his rookie season before missing the final three games with an injury. He left the team in Sept. 2017 under mysterious circumstances after a shoulder injury nearly had the promising 22-year-old safety ready to retire from football before his second season.

2 years later and I’m still fighting the Skins on something they’ve continued to do countless time . Which is why the best tackle in the game refuses to play for them now. Same reason I left. Mishandled injuries and withheld info. All evidence points to them being guilty!

I will continue to fight this case and as the Skins continue to call countless irrelevant witnesses to buy time and hopefully wait me out from their due fate . I will not settle no matter how much the Skins drag their feet on this . They know they’re guilty!

During the time I was put on the exempt list the Skins went out of their way to cut my insurance off, froze my payments, refuse to pay me and even recoup pay. All for a very real injury that THEY decided was made up. Which is why people fear being hurt in the league.

I will not be intimated nor will this go away anytime soon Skins. The evidence in court shows your guilty actions. The lies and mixed stories your witness provided have all been proven false . Use the CBA rules to your advantage all you want I will still win ! You will not! 💯

2 years and no interest added to what I’m rightfully due and no timetable as to when the Skins will be forced to pay me what they owe. I’m willing to fight until the end. I thank the players who have experienced this with this team first hand that have called them on it!

Washington placed Cravens on the reserve/left squad list two weeks after he announced his intention to retire before he was reinstated by the NFL in Feb. 2018 after being medically cleared from post-concussion syndrome. The Redskins dealt Cravens to Denver in March 2018.

Before training camp, Jason La Canfora reported Williams had lost trust with the Redskins organization when he felt the team mishandled a medical situation of his and "trust has been broken with the front office and with the medical team."