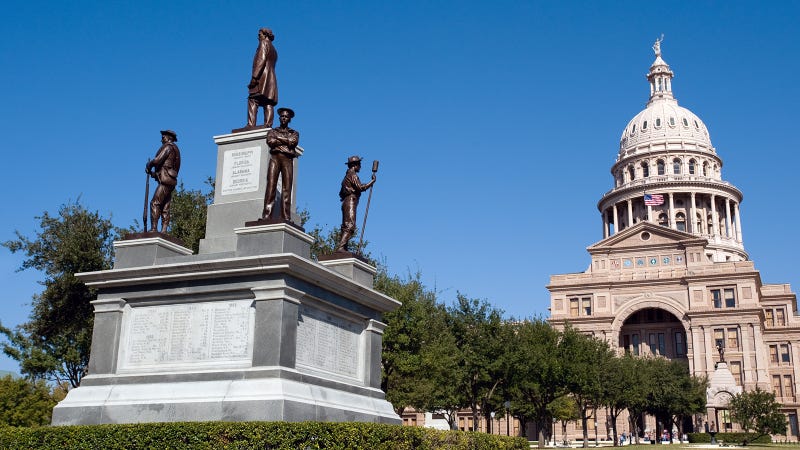 AUSTIN (Talk1370.com) -- Just one day after the country honored Dr. Martin Luther King Jr., Texas is marking another state holiday on its calendar - Confederate Heroes Day. And that is prompting new calls from some Texas legislators to finally remove the holiday from the state's calendar for good.

Texas isn't alone in marking its Confederate past with a state holiday - Alabama, Georgia, Mississippi, South Carolina, Tennessee, Louisiana, and Florida all observe some form of a statutory holiday surrounding the Confederacy. Some mark the end of the Civil War in April, while others mark the birthdays of either Robert E. Lee or Jefferson Davis, on January 19 and June 3 respectively.

Texas lawmakers, in 1973, opted to consolidate the holidays into one observance on January 19 each year, in "honor of Jefferson Davis, Robert E. Lee, and other Confederate heroes." While state offices remain open with skeleton staffing, it remains a paid holiday.

State Rep. Jarvis Johnson (D-Houston) has filed House Bill 36 in the current legislative session aiming to remove the holiday from the state's calendar. At least two other bills aiming to do the same thing have also been filed.

"This is an opportunity for us to bring and shine light on social injustice, how Black people across this country have been demonized and have been treated unfairly by the judicial system, the criminal justice system,” Johnson said. “I think this is another way that we have to wipe away and erase harmful, hurtful imagery that continues to remind us of our horrible past.”

On January 19th I will be hosting a press conference about abolishing Confederate Heroes’Day. Below find some...

Johnson filed a similar bill to remove the holiday during the 2019 session, but it never came up for a vote. Other bills to strike the holiday have been brought up in past sessions, but were either left pending in committee or never even heard.

"I believe now more than ever, with white supremacists rioting in the U.S. Capitol, we must combat white supremacy and its historical representations wherever we find them," Johnson said.