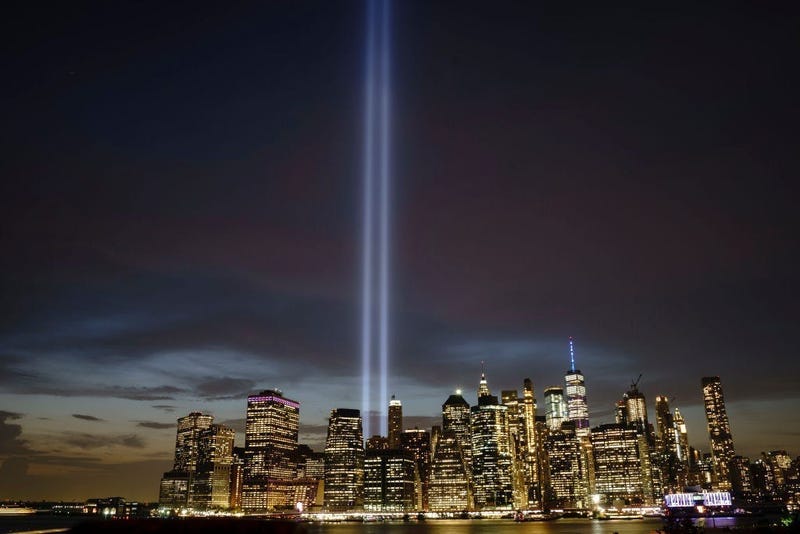 NEW YORK (WCBS 880) — The Stephen Siller Tunnel to Towers Foundation announced Friday it will step in to make sure the annual “Tribute in Light” shines on September 11.

The 9/11 Memorial and Museum announced on its website on Thursday that the “Tribute in Light” has been canceled this year due to coronavirus concerns.

Siller is the brother of FDNY firefighter Stephen Siller, for whom the foundation is named after.

He says it was “mindboggling” that the 9/11 Museum would cancel such an iconic event.

“When we heard yesterday, we started working on it immediately because we knew it was the right thing to do,” Siller said. “Doing the right thing is not always an easy thing to do, but you know when it's right, it's very clear that this had to be done. So we started to do the investigation work and the leg work to make sure that we could do this and do it in a most beautiful way and we can.”

He stressed that the organization was able to put together a tribute ceremony in 24 hours.

“We have already secured the lights and by Monday or Tuesday we will have finished securing the location which is right down by Ground Zero," Siller said.

On Thursday, the museum said the decision to cancel the tribute was “reached in consultation with our partners after concluding the health risks during the pandemic were far too great for the large crew required to producer the annual Tribute in Light.”

The museum added that it hopes to resume the iconic event in 2021 for the 20th anniversary of the attacks.

Many survivors of the terror attacks said canceling the tribute was a blow for America.

He said the display can be done safely and said when he sees the lights, he thinks of his firefighter son who was killed.

Charles Wolf's wife, Katherine, was also murdered at the World Trade Center also gets emotional thinking about the tribute.

“It is beautiful and there is something about it that you just can't put into words,” he said.

The 9/11 Memorial and Museum will still be partnering with NYC & Company and buildings throughout the city to light up their facades and spires in blue to honor the victims and survivors on the 19th anniversary of the attacks.

On Friday, Ed Mullins, President of the NYC Sergeants Benevolent Association, announced the police group would try to host their own Tribute in Light on Sept. 11, 2020.

Mullins then slammed the mayor, saying he let down New York City by allowing the event to be canceled in the first place.

“Mayor de Blasio has once again failed to represent the people of this city with his inability to provide a viable alternative to this sacred annual event,” said Mullins. “He allowed mass protests and riots in the city with no concerns whatsoever about the pandemic. He has shown time and again that he has no allegiance to crime victims in this city, whether they are killed in street encounters or by terrorists.”

FDNY-Uniformed Firefighters Association President Andrew Ansbro also released a statement Friday to express his disappointment in the cancelation of the Tribute in Lights.

“New York City Firefighters stand united in opposition to the cancellation of the annual Towers of Light.  The first responders and New Yorkers who have lived through September 11, 2001, and now persevered through the coronavirus pandemic, are feeling betrayed.  I haven’t spoken to a single tradesman that isn’t ready and willing to work – especially, to complete the honor of lighting the sky on the anniversary of the darkest day in American history,” he said. “These are more than light beams displayed once a year –they are beams of solace for a still-grieving nation and the literal embodiment of ‘never forget.’”

It’s unclear what the SBA’s plans are now that the Tunnel to Towers foundation is setting up its own tribute.

Tunnel to Towers says it is also working to restore the annual reading of the names ceremony, which was canceled last week.

"Tunnel to Towers is making every effort to ensure the safety and health of this year's readers. All 140 speakers will wear masks and practice social distancing," the foundation said in a statement.