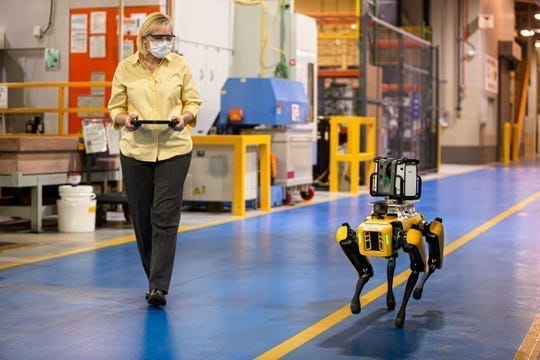 Fluffy and Spot can climb stairs, get into spaces inaccessible to people and scan more items faster than any human. Their scans become 3D laser images that Ford is using to redesign and retool its factories.

They also walk up to 3 miles per hour on a battery that lives for two hours at a time. Fluffy and Spot have three operational gaits – a walk for stable ground, an amble for uneven terrain and a special speed for stairs. They can change positions from a crouch to a stretch, which allows them to be deployed to difficult-to-reach areas within the plant. They can handle tough terrain, from grates to steps to 30-degree inclines.

If they fall, they can right themselves. They maintain a safe, set distance from objects to prevent collisions.

At times, Fluffy sits on its robotic haunches and rides on the back of a small, round Autonomous Mobile Robot, known informally as Scouter. Scouter glides smoothly up and down the aisles of the plant, allowing Fluffy to conserve battery power until it’s time to get to work. Scouter can autonomously navigate facilities while scanning and capturing 3-D point clouds to generate a CAD of the facility. If an area is too tight for Scouter, Fluffy comes to the rescue.

"We've cut the laser scanning time in half and we think as we develop more use cases around it, we'll be able to shrink that even farther," said Mark Godaris, Ford digital engineer.

Official said using Fluffy costs a fraction of the $300,000 Ford has spent in the past on mapping its facilities. And while the traditional tripod scan method can take two weeks, Fluffy can do it in 48 hours.

Digital engineer Paula Wiebelhaus told the Detroit News she takes Fluffy outside for walks in the yard ... and he's so dog-like that her cats hide from him. Like his flesh-and-blood counterparts, he has his own spot in a corner of the bedroom -- but instead of taking naps, he goes there to recharge.

Fluffy, who is bright-yellow, is described as a "nimble four-legged creature." And he inspires affection in addition to awe.

"I guess I was kind of surprised that I feel as close to it as I do," Wiebelhaus told the News. "I won’t be the handler forever. Other people will be trained to handle the dog. I think that's going to be tough for me. It’s like your favorite car or someone borrowing your favorite dress."