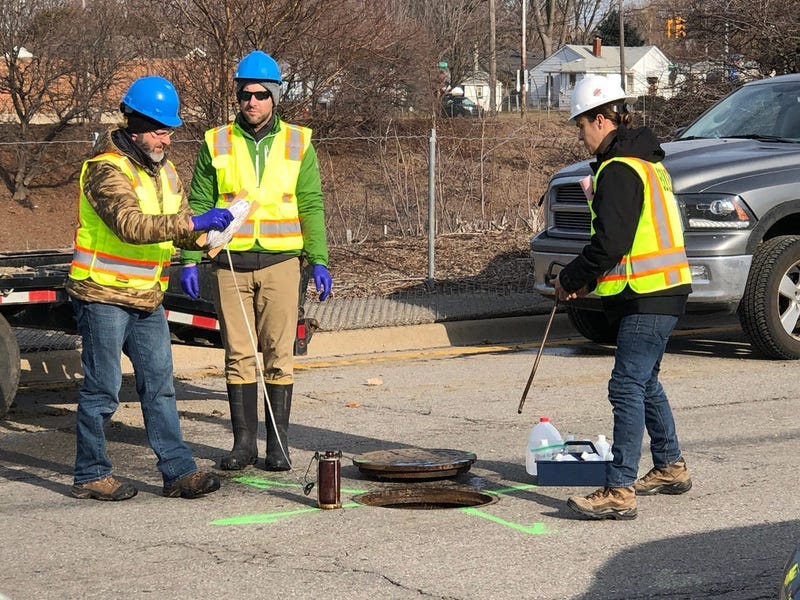 (WWJ) The U.S. EPA and Michigan environmental leaders say the soil contaminated by green ooze that leaked onto the I-696 freeway will not have to be removed.

During a community meeting last night, EPA officials said an in-place treatment will work to clean it up. Chemicals that degrade contaminants will be placed into the soil between the Electro Plating Services building and the service drive, as well as along the top of the I-696 embankment.

Environmental officials say there is no concern about drinking water because all of the communities get their water from the Detroit water system. More than $4 million has already been spent on the cleanup, which started last December.

Contaminants at the EPS site include hexavalent chromium, trichloroethylene (TCE), cyanide and per- and polyfluoroalkyl substances (PFAS). Since December 2019, EPA has collected a total of 260,540 gallons of contaminated groundwater and hauled it off-site for treatment and disposal. While effective, this method is not sustainable long-term, as it is both costly and resource intensive.

Placement of the treatment chemicals, called reagents, will begin next month. EPA will conduct sampling to ensure the treatment is effective before decommissioning the current groundwater collection system. EPA expects to transfer the site to EGLE in December 2020 to maintain the new treatment system. It is estimated that the treatment materials may need to be replaced every three to five years.

"The goal of the treatment is to address the groundwater contamination as it migrates from the EPS site. On-site soils still contain contaminants above clean-up criteria. Removing the source of the contamination (the building and site soils) will reduce the duration of in-situ treatment," EPA officials said in a press release.

Legal proceedings are currently underway to authorize demolition and removal of the EPS building. Only when the building is removed can contaminated soils be permanently removed. That's when EPA will line the sanitary and storm sewers with an epoxy, cured-in-place pipe liner to prevent any further infiltration of groundwater into the deteriorated pipes.

Meanwhile, the man responsible for the chemical waste that oozed onto I-696 in Oakland County was released early from prison because of the COVID-19 pandemic. Gary Sayers, owner of Electro-Plating Services in Madison Heights, pleaded guilty to illegally storing hazardous chemicals.

music
Wendy Williams gets candid about her upcoming biopic and motherhood: ‘Children are expensive!’
sports
Jimmy Butler lost more than 12 pounds in a week during bout with coronavirus: report
sports
Report: Deshaun Watson has requested a trade from Houston Texans
news
Crocheted doll of Bernie Sanders from Biden's inauguration sells for $20K online
sports
Deshaun Watson landing spots: Which teams could pursue Texans QB?
sports
Joel Embiid on LeBron's flagrant: 'if it was me, I would have probably been ejected'