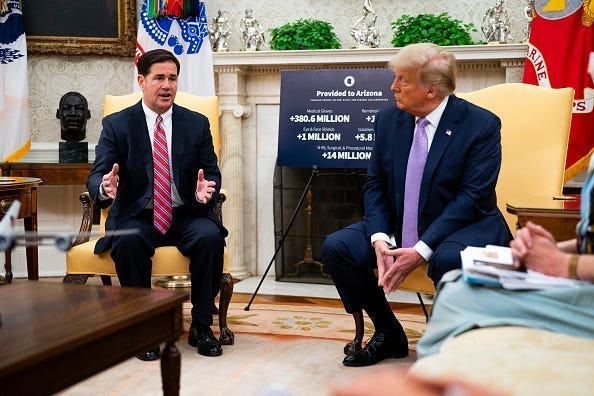 President Donald Trump has appointed Arizona Governor Doug Ducey to the Council of Governor as co-chair.

According to a press release, the council "serves as a bipartisan forum for governors and the administration to discuss critical issues affecting states and the federal government, especially matters pertaining to the National Guard, homeland defense, and defense support to civil authorities, and advise on policy direction."

The press release is posted to the governor's website.

Ducey has served on the council since 2019. The co-chair position was once held by Arkansas Governor Asa Hutchinson.

The council is compiled of 10 members - five from each political party. The 10 spot will be held by Tennessee Governor Bill Lee, the White House announced on Wednesday.

"I am honored to continue my work on the Council of Governors as co-chair,” said Governor Ducey. “Prioritizing the Council is just one of the many ways the Trump Administration has facilitated strong partnerships with the states and given Arizona a seat at the table on the issues that matter most."

President Trump is slated to make an appearance in Yuma, Arizona on Tuesday, August 18. He is expected to visit several highly contested states in the near future including Minnesota, Pennsylvania, and Wisconsin.