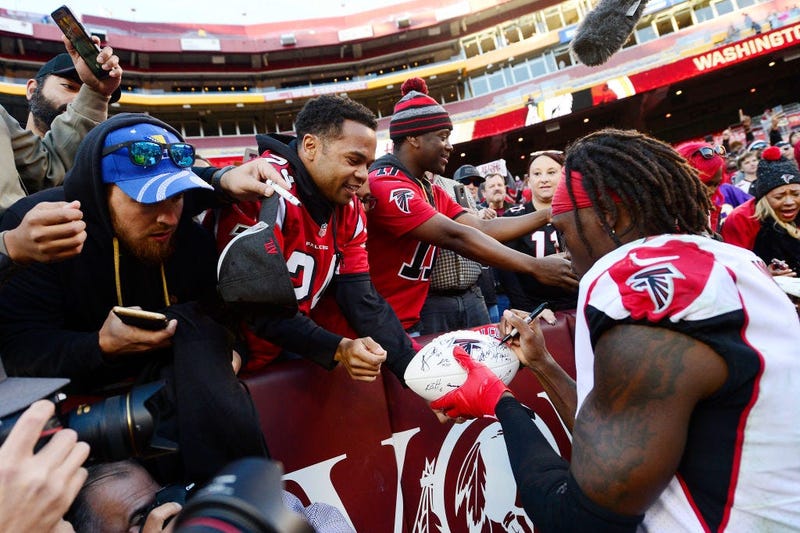 Santana Moss and Fred Smoot are of the belief that their era of Redskins teams may have influenced the lack of fan support for this current era's team.

Fans and commentators this week have reacted across the board to Josh Norman's criticism of Redskins fans, in which, after Sunday's win on the road in Tampa, Norman said he'd rather play on the road because playing at FedEx Field feels more like playing on "the other team's turf or something."
D.J. Swearinger, too, would rather play on the road. The Redskins safety told 106.7 The Fan on Monday that games at FedEx this season are "some of the worst things I've seen," while noting that he's played for four different NFL teams.
There does appear to be a concerted get-out-the-vote style campaign by Redskins players this week to drum up better home crowds. Adrian Peterson tweeted this Monday afternoon.

Thanks to the Redskins nation we are 6-3 and in the first place spot in the NFC East Division!We need @FedExField rockin on Sunday! Let’s Go @Redskins fans, we need you! #HTTR pic.twitter.com/dCiLUpCqWh

But none of that answers the question of how we got here. The Redskins are 6-3 and atop the NFC East. Fans, in theory, should be supporting the team ravenously and turning out in droves. And yet each game at FedEx brings another struggle to yield louder fan support for the home team than visiting opponents.

"It has some truth to it," Moss told Chad Dukes during his weekly 106.7 The Fan appearance Monday, sponsored by Paul Henry's Windows. "I love the fans here. I love the fanbase here. It's unfortunate for those guys because we only went to, what? I went to the playoffs three times while I was here. And we packed the house. We packed the house every year."

"So yes, it's unfortunate," he said, "because I asked the same question watching the Colts game: Where are the fans? I was trying to say, well, maybe it's too early and as the game goes on... I was there for just the first half of the game before I went to work, and I'm sitting there like, 'Where are the fans?' The guys feel it, and they probably had it in 'em and they just wanted to say something about it."

At the time of that loss to the Colts in Week 2, Redskins running back Chris Thompson remarked that, as players, "we want to have our stadium packed out." The Redskins, despite going 5-2 since then, have yet to yield a packed out a stadium and rank just 26th in the NFL in average home attendance (61,201). Thompson reaffirmed his hope to see a "packed out" FedEx to reporters on Monday.
It was Smoot who first raised the idea that maybe his Redskins are responsible for dwindling support today, an idea he proffered after a blowout 38-14 home loss to the Falcons in Week 9.

Fred Smoot, randomly, while looking out the window, searching for life's answers at @NBCSWashington just now: "I think my generation of Redskins ruined it for these Redskins. People came out to watch us play and we had no chance to win."

"This all kind of started for me when Fred Smoot and I were sitting at NBC Sports Washington," Paulsen said. "And he was looking out the window and he said – this was out of nowhere, by the way. This was at the Atlanta game, and I said, 'Man. Listen to that. Austin Hooper is an obscure tight end and they're going Hooperrrrrrr! This is so ridiculous.'
"And he goes, 'I think my generation of Redskins ruined it for these Redskins. People came out to watch us play and we had no chance.'

"And I kind of followed up with it, and his point was, 'Like we got supported through thick and thin. We would lose, and then we would lose again and we'd get kicked in the teeth, and the next week they'd be back.' And he thinks that there was just only so much that those fans could endure and that they, to quote 'Big Daddy,' they wasted the good surprise on Fred Smoot's group. You know, that they just kept supporting that team and that's how he thinks we got where we are now."

"(The players are) talking about the one's that's not showing up any more, and the one's that's there, not to really be there. You know, I understand that the fans get pissed off and get tired, and most of the fans are not coming because of the organization itself. It's not the players. There's a lot of fans I bump into all the time, they're like, 'Ah! Well screw this and screw that! I love my Skins, but I can't take it! I can't take it no more!' And I understand them. But what the (players are) saying is, man, if you're a fan, if you're riding with us, if you've been there before, keep coming. Because they feed off of that. They feed off of all the energy that you guys give."

Moss explained that's why, at his various public appearances, he takes the time to let Redskins fans know he appreciates their support through the years.

"I really appreciate you guys rocking the stadium and wearing those 89 jerseys, and even rocking it to this day," he said.

"You shouldn't be up or down with it," Moss went on to say of fandom. "If your rock with 'em, you rock with 'em. Be mad at 'em for a little while and then get over it. Get out your feelings. Don't be in your feelings. (Norman) expressed his feelings after a victory and he's done with it."

"But as a fanbase, man, it is a shame to not see these guy show up for these guys, because football has been played a little better here," he continued. "Yes, I understand there's a lot of things that they might want to see different, want to see a little more consistency – and we all want that – but they've been playing some good football for the last few years."

"Have they been showing up in the playoffs or getting a playoff berth? No," Moss said. "But they've been playing a lot better than what we displayed on a consistent basis. And that's one of the things that, to me, should motivate fans to come out and want to be a part of it, because I think that little more extra couple bodies here and there might give these guys that little nod, or that little push that they're looking for."

In response to a caller, in a later segment, suggesting the Redskins need to give fans something worth cheering for, Dukes brought up the team's record and its current two-game lead in the division.

"They're never satisfied," Moss said. "It's like that girlfriend that, you give her something and she wants more, and then she ain't satisfied till your ass out that door."
"Fans, you've been wanting a winner," he added. "You've been wanting these guys to be winners. It's not pretty, I understand, offensively at times. But they're winning. So, at the end of the day, man, I don't see what the uproar's about -- you know, how they win or when they win. For years, you've been wanting, you've been asking, 'Just give us something. Just give us some victories. Give us some wins.' They're winning now and you're still not packing the stands, so you tell me."
Follow @ChrisLingebach and @1067TheFan on Twitter