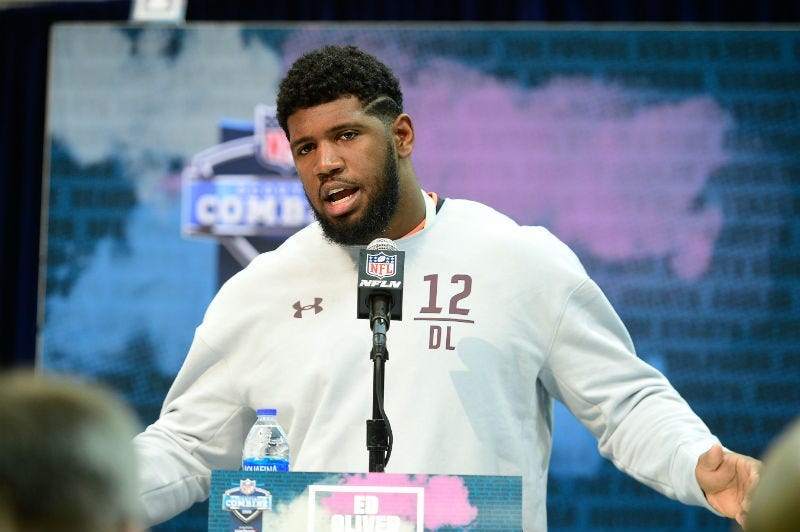 With less than three weeks until the NFL Draft, it might be easier to name the players not linked with the Redskins among the top 20 prospects than those who have been.

However, there are some names that haven't been mentioned as much that should be. Some are based on position, while others are simply unlikely to fall. Here are a few names not previously tied to Washington, players who wouldn't surprise me if they became Redskins on draft day.

Oliver is a physical freak who would be best used as a 3-technique (defensive tackle who lines up between the guard and tackle) at the NFL level, but could have some versatility thanks to his athleticism. The reason nobody would ever mock him to Washington is the Redskins have taken defensive tackles with their first-round draft picks in the last two years. They've also hit on late-rounders Matt Ioannidis and Tim Settle.

In fact, you could argue it's easily their best position group. However Oliver is a different kind of player than Jon Allen and Daron Payne. The Houston prospect is extremely quick twitch, drawing comparison from some scouts to having Aaron Donald-like traits.

Ultimately I expect Oliver to be gone by 15, but should he fall, don't be surprised if the Redskins can't pass up his talent. They don't need him on the depth chart, but he would bring a skill set they don't have to a defense that still needs playmakers at all three levels.

Of course there's an Alabama player on this list! We'll have more on the Redskins' relationship with Alabama next week, but Williams needs to be mentioned. He's a top-flight talent that would help the Redskins from Day 1. Most teams would draft him as a tackle, where he is ready to play, but Washington could start his career at left guard with a plan to move him outside when they're ready to move on from Trent Williams or Morgan Moses.

Williams is an A+ character prospect. He's everything the Redskins love about Alabama players, including that he's really good at football. It would seem almost crazy to invest even more top-end resources on the o-line, but at the rate Moses and Trent Williams are breaking down, it seems unlikely Jonah Williams would reach the end of his rookie contract before he replaces one of the two.

He's less likely than Oliver to drop all the way to 15, but I saw two different mock drafts today that had him falling to Minnesota at 18. If he's there at 15, the Redskins should and will think about drafting him.

Nobody would be surprised if the Redskins took a playmaker, but I think some may be surprised at how early Washington could take Brown.

Every team looks at medical issues differently, and the Redskins have shown a willingness to take some risk in this department. Obviously some of that hasn't paid off with the litany of injuries that have derailed the past two seasons, but in some ways it's also proof to just take the best player. You can't predict injuries. Anybody can get hurt, so why not just take the player who can most help your football team?

Enter Brown, who might've had a shot at John Ross' 4.22 40-yard dash record if he ran at the combine. He couldn't because of a Lisfranc injury that will keep him out until training camp, but if he's on pace to be ready for the start of the season, why wouldn't a team take him basically as high as he would go without the injury?

The Redskins need playmakers like the Wizards needed to fire Ernie Grunfeld. Brown would add a desperately needed vertical threat that's as close as there is to DeSean Jackson in this draft. N'Keal Harry is another possibility at wide receiver, but he's been linked to the Redskins plenty. Keep an eye out for Brown, more likely in a trade back scenario. But if the board falls just right, maybe the Skins pull the trigger at 15.