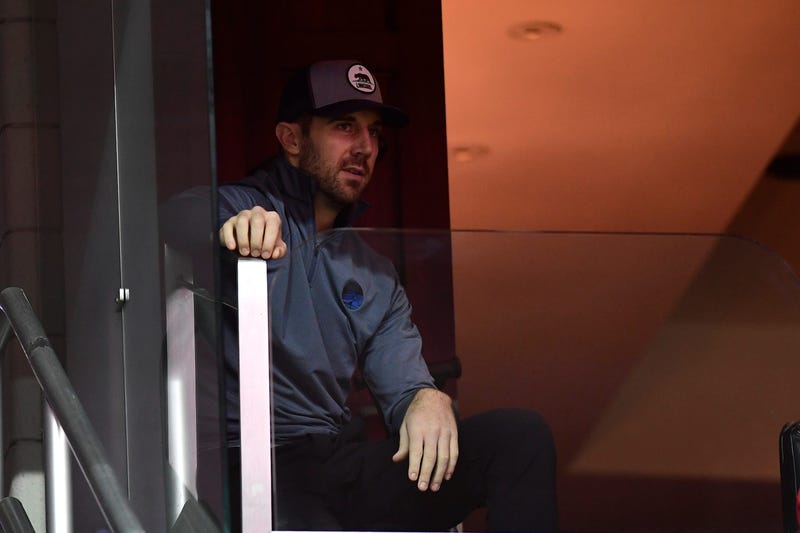 January 22, 2019 01/22/2019 6:58 pm
It's time for the Washington Redskins to admit Alex Smith isn't playing again . . . at least to themselves.
The quarterback made his first public appearance since suffering the devastating leg injury on Nov. 19, at a Washington Wizards game on Sunday. He donned an external fixator leg brace, meant to hold his broken bones in place. It's a nasty injury with a long recovery.

Smith won't play this fall and, let's be honest, it's not looking good for 2020 when he would return for what's essentially the final year of his contract at age 36. Why Smith is being coy over his condition is his business, but football is big business and sadly the Redskins must continue on with someone new.

The successor could be Oklahoma quarterback Kyler Murray, the Heisman Trophy winner who recently declared for the draft. Suddenly, the Redskins were in the quarterback hunt again after an earlier, limited supply made their 15th overall selection too late.

Murray may be available when Washington selects, but the biggest thing Washington needs to see is his height recorded at the NFL Combine on Feb. 28. He was listed at 5-feet-10 by Oklahoma, but rumors have him ranging anywhere from 5-8 to 5-11. Colleges and NFL teams think lying isn't a sin and will often give short players an extra two or three inches, while overweight players will suddenly be 20 to 50 pounds lighter.

The Combine measurement is the truth, though. The league does it impartially and everyone is watching. If Murray comes in under 5-10, then the Redskins need to move on because he'll be too short.

Don't bother saying Murray's college line was as tall as the Redskins'. It's not a real comparison because Murray won't play outside the tackles as much in the NFL. He'll be stuck behind giants and lack needed time to find targets.

Never fall in love with prospects thinking they'll change. Their shortcomings won't improve in the NFL.

It may be awhile before Smith and the Redskins admit he's not returning, but they're only fooling themselves. The key now is to not be fooled twice when picking a replacement.