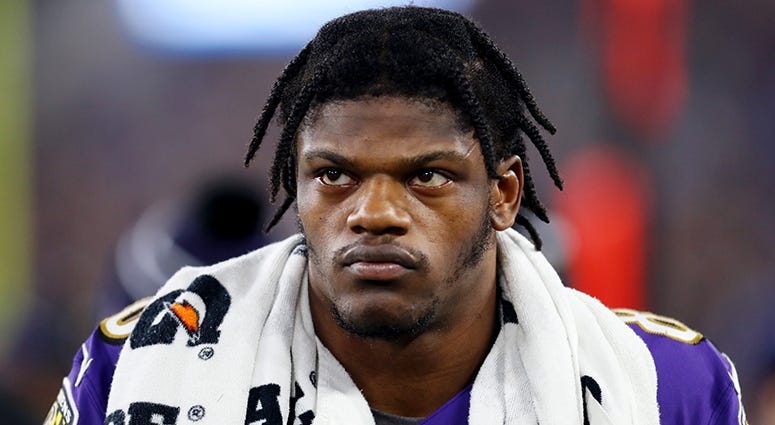 January 13, 2020 01/13/2020 11:28 pm
Warning: This is not a letter for native Baltimore fans or for anyone who cheered for the Ravens in the Joe Flacco era. That was punishment enough, and you earned it. This is a letter to anyone who hung up a Lamar Jackson, Mark Ingram or Marquise Brown jersey next to their Chris Cooley, Brian Orakpo or Santana Moss jersey in the closet. You know who you are.

In your time of despair and broken Super Bowl dreams, we fans of the Washington Redskins know exactly how you feel. Just don't expect our sympathy.

After all, 2012 was supposed to be D.C.'s year, with an ultra-talented, dual-threat quarterback who gave flawless interviews and took the league by storm. We had our own top running back, our own dynamic receivers, and we proved that the pistol formation works in the NFL (you're welcome).

We had a long winning streak of our own, and it briefly became trendy to be a Redskins fan.

We will never forget that Ravens lineman Haloti Ngata turned Robert Griffin III's knee into sausage. It was the Ravens who would ultimately win the Super Bowl, while Redskins fans were left to wonder what could have been.

But then again, you already knew that.

Back in those days, you were a Redskins fan, helping to make Griffin the top-selling jersey in the NFL. Sitting in Landover, you chanted "R-G-3" in 2012, just like you chanted "M-V-P" this year in Baltimore for Lamar Jackson.

"So what’s the big deal?" you might ask. "The Ravens revolutionized the game. Baltimore regularly goes to the playoffs and has a superior game day experience."

All of those points are probably true...but have you no shame?

According to the U.S. Census Bureau, nearly three-quarters of Americans live in or close to the city where they grew up. Cities are where most sports teams call home, creating what should be a lifelong bond between a city, its citizens and its sports teams.

Sports teams are part of the social fabric of a city, with direct ties to its politics, economy and culture. The very fabric of society tears when people like you switch favorite teams.

Exporting your favorite professional sports team is so outrageous, so heavy-handed, that it should be compared to:

Sure, the Redskins have soiled the carpet at times, held on to trash too long, stunk up the joint, and jettisoned some legends, but they're still your hometown team.

In places like Philly, Boston and Chicago, sports teams are synonymous with the city itself. Why? Because the fans and citizens of those cities are one and the same. Those fans don't jump ship when the going gets tough.

Why should that be any different in Washington?

Those wins were sweet because it was your team in your town. You survived the losing and disappointment so you could relish the victories. If you're old enough to remember the Redskins winning three Super Bowls in 10 years, then you know D.C. dynasties are possible.

How could you walk away from that?

This year, at least, you got what you deserved. You tried to shortcut your Super Bowl dreams, and you went nowhere. Big Truss? How about Big Russt. Team of destiny? I guess being humiliated at home by a sixth-seed is one type of destiny.

Moving forward, the Ravens will probably be fine. Of course, they went 13-3 in 2006, lost in a similar fashion to the Colts, then went 5-11 in 2007 and cleaned house. That probably won't happen again, right?

The Redskins still have a lot to prove, but they're headed in the right direction. Bruce Allen is out, Ron Rivera is in, and the team has draft picks and money to spend. Things are looking up in D.C., at a time when the Ravens will almost certainly get worse.

We don't want to influence your loyalty but don't think you're welcome back on the D.C. bandwagon. No more HTTR tweets, no more D.C. sports selfies. Enjoy your Ravens, Old Bay and Natty Boh. If you need us, we'll be hanging out with the Orioles-turned-Nationals fans in D.C.