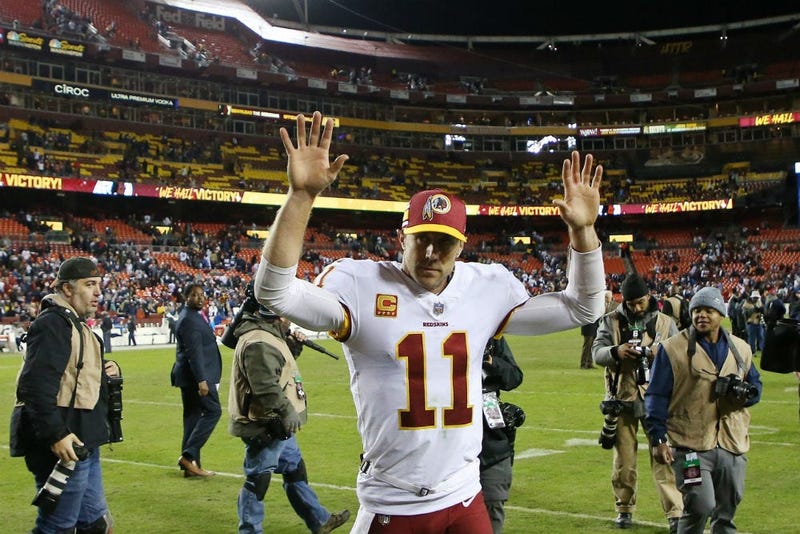 The biggest issue facing the Washington Redskins is a salary cap crunch due to uncertainty at the quarterback position, ESPN's Adam Schefter said Friday.
Speaking to 106.7 The Fan's Chris Russell and Erin Hawksworth, Schefter said the Redskins "are in a very difficult position" due to the long-term ramifications of Smith's injury.
"Nobody knows if and when Alex Smith is gonna be back," Schefter said on 106.7 The Fan.

"If he's not back, not only do you not have to just replace him, but you have the financial cost of him being there," Schefter said. "And I don't mean to sound insensitive, first and foremost you want to make sure that he can recover, get healthy and go and live a happy and healthy life with a injury as serious as the one he suffered."

Smith made his first public appearance this week since he suffered a devastating leg injury in November and was wearing an external fixator on his right leg, which raised doubts about his football future.

"When we get to just a football part of this," Schefter said, "If they're without Alex Smith they take a huge hit on the field and in the books financially."

The Redskins signed smith to a four-year, $94 million deal (with $71 million in guaranteed money) during the 2018 offseason. The amount of guaranteed money limits the team's financial maneuverability when looking for a replacement at quarterback.

"So it's a huge problem to overcome," Schefter said, liking Washington's current cap crunch to one the Redskins had in 2012.

"And the Redskins were put in a very tough position then, basically being handcuffed and having to overcome the loss of that cap space. And it would really be the same thing here if Alex Smith couldn't play," Schefter said. "Because you'd have to find another quarterback and you'd have to do it with that much less salary cap space."

Schefter slightly defended team president Bruce Allen's comments about the Redskins being "close" last year because of the Smith injury.

"They were 6-3 at the time Alex Smith got hurt. And so, you know, it's easy to pile on them right now and say that they seem like they're a ways away," Schefter said.

"So you could talk about whatever you want, Bruce Allen or the talent on the roster or this or that," Schefter said. "The fact of the matter is if Alex Smith can't play going forward they are left in a very difficult position."