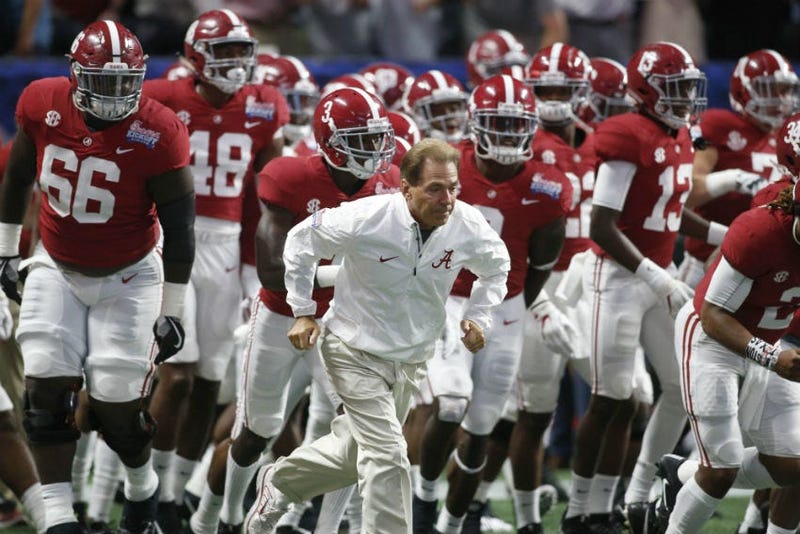 On April 2, 16 members of the Redskins organization boarded owner Daniel Snyder’s plane for what has become an annual trip. The members of the coaching staff, scouts and front office personnel were bound for Tuscaloosa, AL.

Alabama’s pro day was March 19, but that isn't when the Redskins do their damage. It is instead on the “second pro day” in Tuscaloosa, which the Redskins turn into a scouting event. The sixteen person party included team president Bruce Allen, VP of Player Personnel Doug Williams, Director of College Scouting Kyle Smith, the Redskins area scout who covered Alabama all year and multiple members of the coaching staff including defensive coordinator Greg Manusky, defensive line coach Jim Tomsula and running backs coach Randy Jordan.
Head coach Jay Gruden did not make the trip this year simply because he had already spoken to so many of the players at the combine and on visits, where he takes a lead role in the meeting. Instead, this trip was for the assistants to get valuable time with the prospects who might wind up making the same trip north like Jonathan Allen, Daron Payne, Ryan Anderson and many others before them.

While most teams were represented at this second pro day, nobody does it quite like the Redskins. They coordinate with the Alabama program, which is notoriously friendly to NFL teams so that their personnel can spend time with the players watching film, talking and additionally get time with the Alabama staff that coached them.

The Crimson Tide has produced more pro prospects than any other school during the Nick Saban era. They get the best players in recruiting and they coach them extremely well. This is no surprise. The Redskins have taken advantage of this pipeline, specifically in the last two years where they have taken an Alabama defensive linemen in the first round and followed it up with more Bama players later in the draft. They’ve also acquired multiple Crimson Tide players via free agency, including their number one target this offseason in Landon Collins and number one most talked about in Reuben Foster.

So which players could be the proverbial fruit of all that labor? Here are five Alabama prospects that could wind up in Washington:

Deionte Thompson (S) - Thompson is one of the most difficult prospects to evaluate in the draft because there is a massive hole in his resume. He mostly played free safety at Alabama and was highly effective in that role. However, there are moments on tape where you wonder just how fast he is. Can he really cover the ground he needs to over the top?

This is where testing becomes important. A 40 time would help scouts solve this mystery. Thompson could’ve answered these questions by running a 40, but he wasn’t healthy enough to do so during the process or simply declined the opportunity as he was coming off a wrist injury suffered while training for Indy. That gap probably knocks him down into the 2nd or 3rd round unless a team takes a flyer based solely on his tape, which again grades out at that level. Good testing could have boosted him into the late 1st. Instead, he’ll wait and hear his name called sometime on day 2.

Jonah Williams (OL) - We talked about Williams last week, but to recap: the Redskins could draft the best tackle prospect in the draft and start his career at guard, knowing the end of Trent Williams' and/or Morgan Moses’ days as a starter are likely to come by the end of his rookie deal.
It’s clear the Skins don’t believe Geron Christian is ready yet based on their signing of Ereck Flowers. Does this mean they’re still looking at a tackle for the future? Clearly, yes, but a first-round pick needs to help now and Williams could be playing left guard.
Irv Smith (TE) - The Redskins need another tight end and specifically, one who isn’t an automatic tell of run versus pass like Jordan Reed (pass) and Jeremy Sprinkle (run) have been. Vernon Davis isn’t a tell, but I can tell you his blocking leaves more than a little to be desired. Smith might start off there, but has shown enough promise as a blocker that with experience and coaching he could develop into an excellent Y tight end moving forward.

Anybody who watched Alabama in 2018 would have noticed Smith. He always made an impact, notching at least one catch in every game and ten touchdowns for the season.

Christian Miller (EDGE) - It’s no secret the Redskins need another outside linebacker and some think Miller would be a terrific fit. He’s super athletic, jumping 38.5” at the combine. He’s 6’3” 248 lbs and has the long, lean body type that screams pass rusher. In 2018 he had 8.5 sacks as a rotation player, starting just 4 of 14 games.

Miller will be a late day two or early day three pick because he has a significant injury history. He missed games in all four years at Alabama, including the National Championship game last year. Consistency has been an issue, but if the Redskins want to take a swing at a player with significant upside, Miller could fit the bill.

Mack Wilson (LB) - Could the upgrade to Alabama product Shaun Dion Hamilton be another Alabama product? Well of course! Wilson’s production at Alabama makes him incredibly intriguing for the Redskins as a mid-round pick. He had six interceptions in two years as a starter for the Crimson Tide. A linebacker who excels in pass coverage? The Redskins have been searching for that for a loooong time.

Wilson is a mid-round product for the same reasons as Miller. He’s inconsistent. He didn’t show a lot of improvement from year one as a starter to year two, and he doesn’t make a ton of explosive plays. He only had seven tackles for loss in two years. However, he’s solid and with a middle round pick at a position where the Redskins have lacked consistency since London Fletcher retired.

Josh Jacobs (RB) - Guice and Thompson are coming off injury. Peterson is 34. He’s the best back in the draft. Unlikely, but wouldn’t floor me.
Damien Harris (RB) - See above, minus the last sentence. He’s still really good though.
Ross Pierschbacher (C) - Chase Roullier has been good, but not so good that you couldn’t justify some competition and a little depth along the interior, which is needed.
Lester Cotton (LG) - I’m not sure if you heard, but the Redskins need a left guard.
Saivion Smith (CB) - Smith would be more of a depth and special teams guy to start but he’s a big corner, separating him from Danny Johnson and Joshua Holsey as a different type of corner.
Follow Redskins reporter @CraigHoffman for more insights.