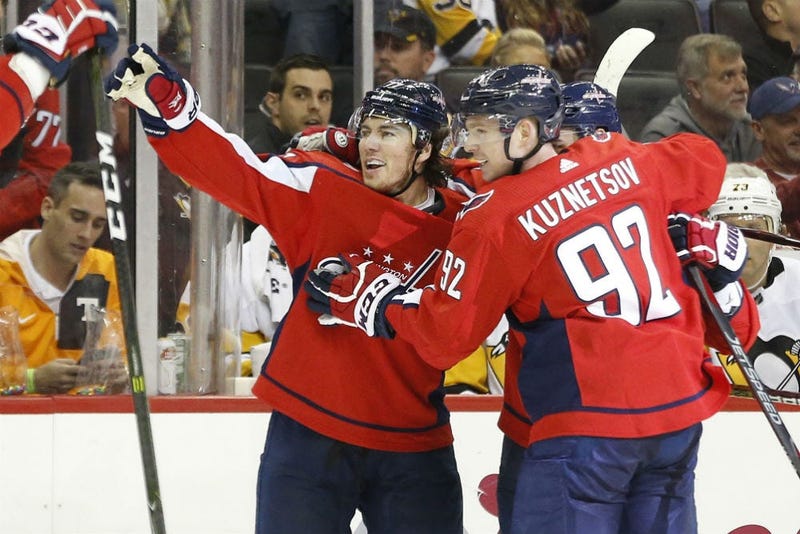 Pittsburgh Penguins forward Evgeni Malkin should be suspended by the NHL for his illegal hit on Capitals forward T.J. Oshie, Alan May said Thursday.
"I absolutely think that he should," May told The Sports Junkies. "I really like (Malkin), I think he's phenomenal to watch, I'm a big fan of everything that he brings. But we saw Mark Borowiecki with the Ottowa Senators get suspended for the same type of play. I don't know if it's a reaction, but I just think that that one has to be called on the carpet."

Malkin hit Oshie in the head with his right shoulder in the third period and received a five-minute major penalty and a game misconduct. Oshie left the ice to undergo a concussion test, before returning to score the game-winning goal in the Caps' 2-1 win.

"The league has given guys suspensions this year, I think, for less. I don't care how good of a player he is, we've seen (Alex) Ovechkin get suspended in the past, I really think that he has to be suspended, serve some time for this," May said.

May didn't recommend a length of the suspension he would like to see, but said it should be more than one game.

Later on Thursday, the NHL Department of Player Safety said they will not bring any further discipline against Malkin.

When asked if Oshie flopped, May dismissed the theory as "garbage" comments from rival fans.

"I'm sure they were Pittsburgh fans," May said. "He did not flop, he smashed his face on the ice. He also smashed his chin on the ice that was not a flop."

"It's just garbage to have an opinion like that."

May also raised the possibility of Oshie suffering some lingering effects from the hit to the head.

"I was a little bit alarmed, in his interview after the game, he kept getting the answers to the questions wrong, or maybe not understanding," May said. "Hopefully he woke up well today and the next time they skate he'll be out there ready to go and feeling good because last year I felt that he was out of sorts for quite a while after taking a head hit."

"I don't know if I'm making something out of nothing, but I thought it was odd," May said. "He was happy, he was laughing, he was joking. I just hope that he's alright."

Oshie has had several documented concussions during his career and the Capitals can't afford to lose him for an extended period of time.