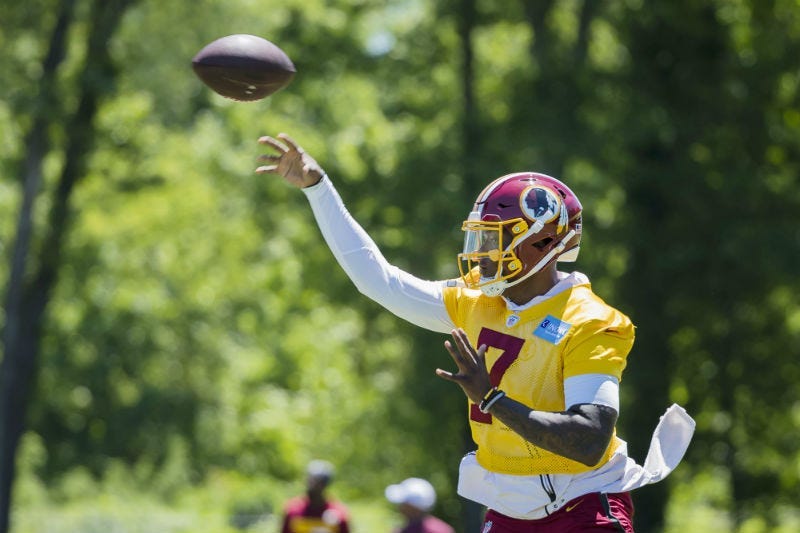 This offseason, the Washington Redskins' top draft pick has said all the right things.

Rookie quarterback Dwayne Haskins isn't concerned about starting right out of the gate.
"I don't really worry about starting Week 1," he said this week. "I just want to be ready to play Week 1, whether that's this year or next year or whenever my time comes for me to play."

"I just want to make sure that when I do play, I don't want to look back," Haskins said

So, that would be a no on any "All in for Week 1" chatter from the No. 15 overall pick in the 2019 NFL Draft. Week 1 isn't the goal, just the beginning.
After Case Keenum looked to be taking the lead in the quarterback competition during practice at Redskins minicamp, 106.7 The Fan's Danny Rouhier said the starter at the beginning of the season doesn't matter.
"The only thing that matters to me is what's best for the development of Dwayne Haskins," Rouhier said this week. "And reasonable minds can disagree about that. Some might say, 'You throw him in the mix, and you let him go through adversity, see what happens.' Some might say, 'He needs to sit and learn.'"

"Dwayne Haskins being excellent is what matters, because that's where this team is gonna go for the next half-decade. So that tells me ... the 'Hey, let's sit him for a few weeks' people have a good case," Rouhier added.

The plans for the remainder of the offseason for Haskins: "Train, train, train," he said on Tuesday. "Every day, find a way to get better. ... Just try to find that one percent every day."

And starting right away might not be best for long term development as the learning curve for Jay Gruden's offense and the transition from college to the NFL is a steep one. Gruden noted the challenge facing his rookie QB this offseason.

"He has to learn it. If he feels like he is a little bit unsure of anything, he has to study it and continue to go over it in his mind and rehash it," Gruden said.

"We threw a lot at him: formations, motions, protections, route concepts, run concepts, audible, two-minute, no huddle, all of that stuff. There is a lot to learn for the kid, but we want to get it all out there for him so he has an understanding of what it is going to be like come training camp. A long way to go, but I like where he is at," he said.

"When I know what I'm doing, I feel like I'm pretty good," Haskins said. "Then there are times where I got to freelance, where I don't know. Just the biggest thing is trying to learn and add to the foundation every day. Once I figure out the plays, I feel like the sky's the limit for me."