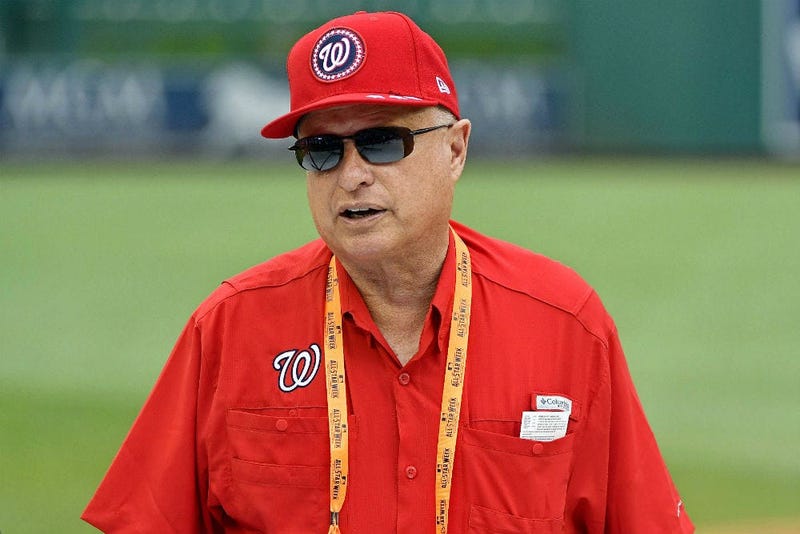 Free agency has been the dominant (and often annoying) storyline this baseball offseason.

For the Washington Nationals the never-ending Bryce Harper Sweepstakes, Scott Boras tactics, and the growing tension between the players' union and MLB has stolen some the focus away from action on the field as spring training begins.
Unfortunately, this may only be the beginning. Nats managing principal owner Mark Lerner indicated his desire to stay under MLB's competitive balance tax (or luxury tax) as part of his decision-making process when it comes to signing players.
“It’s a pretty severe penalty if you go over and it’s been our goal all year to stay under that,” Lerner told NBC Sports Washington Friday.

The Nationals were one of two teams to owe money in 2018, handing over $2.39 million for going $8 million over the limit. (The Boston Red Sox were the other. They paid $11.95 million and won the World Series.)

If the Nats go over this season, their tax burden would increase and they would be charged at a 50 percent rate for every dollar over the $206 million limit. A desire to avoid this rate hike (the Nationals are about $10 million under the threshold) may be why Harper wasn't a top priority and may also impact decisions for years to come.
Specifically this focus on financials could impact the team's thinking around third basemen Anthony Rendon, who will be an unrestricted free agent after the 2019 season and is expected to command a healthy contract. He was the recipient of praise from Lerner on Friday.

“We love Tony to death,” Lerner said. “He’s certainly one of the greatest players in the game today. He’s an even finer person. His activities with the youth baseball academy back in D.C. are phenomenal. He does it under the radar. It’s very important to him. Just a great example of the way a professional athlete should conduct himself. Like I said, he’s one of my favorites for a reason.”

The Nats' 28-year-old is one of the many players represented by Boras and whether he would be willing sign an extension before entering free agency remains to be seen.

"I'm all ears," Rendon told Grant & Danny Friday. "I'm up to listen to whatever the Nats have to offer or whatever they want to have the discussions about."

"If we can come to terms where both sides are happy, I mean, why wouldn't you take that, you know? If you feel like your value is getting appreciated and they're on the same page, then, I mean, what's the issue?" Rendon said.

When asked by Grant Paulsen why not sign now, Rendon was succinct in his response: "Maybe both sides aren't in the same place."
Both sides being far apart has been a constant for seemingly every player on the market this offseason. With players like Max Scherzer, Sean Doolittle, and Ryan Zimmerman pointing at the numerous teams not interested in competing as culprits for artificially driving down wages.
SEE: Grant & Danny: Tanking works, but has it hurt baseball?
While the market did allow Manny Machado to sign a 10-year, $300 million deal after a long wait, Doolittle still sees problems with the system.
"But we still have a lot of guys that are left unsigned," Doolittle told 106.7 The Fan Friday. "Really, really, good players, all-star players. Obviously, Bryce, but (Dallas) Keuchel and Craig Kimbrel and Carlos Gonzalez."

"The game is in a better place when you have teams that are competing, off the field as well, to try to put together the best rosters that they possibly can," he said.

A disinterest in winning is not a charge levied against the Nationals, with Doolittle calling them "an exception" to that growing trend. And Lerner said Friday, "Our philosophy has never changed but, certainly, our goal is to make the playoffs and hopefully deep into the playoffs."

But, of course, financials come into play when making decisions about free agents.

Washington general manager Mike Rizzo told 106.7 The Fan: "They have to fit within your parameters, you know, everyone's got a budget, everyone's gotta pinch pennies, and look, our payroll is about $175 million this year."

Pinching pennies could mean some tough decisions for the Nationals. And the growing number of teams not interested in winning could also lead to increased frustration among the players and potentially a work stoppage.

Walking away from the game is a decision Rendon has contemplated before.

"My identity is not in baseball. So, if any point in time where, you know, I'm not appreciated and I'm not being compensated for it, or if baseball has been taken away from me and I have to go back home," Rendon told 106.7 The Fan. "And the fact that I'm not looking for happiness in this sport, so I can go home and be perfectly fine without having baseball."