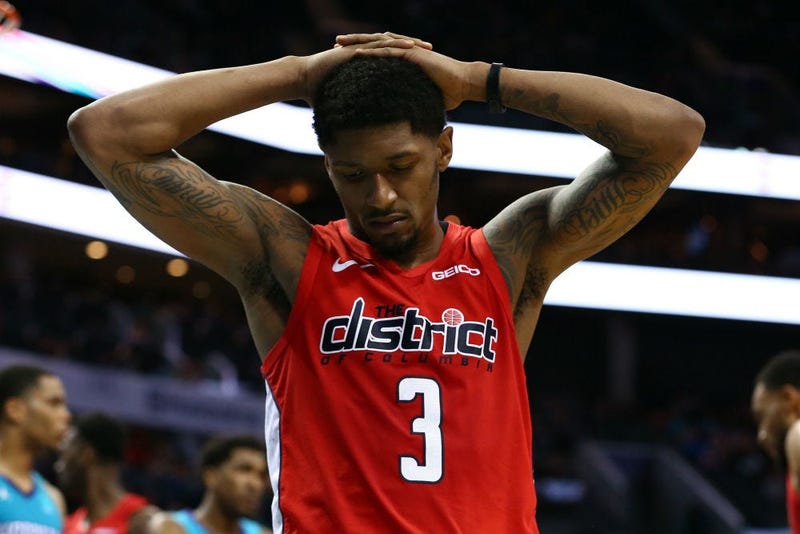 He's the last man standing. He's king of the hill. He's... pretty much the only one left.

Yes, Bradley Beal remains the only (healthy) piece of the once seemingly decent core being assembled by the front office of the Washington Wizards.

Beal poured in an impressive 46 points Friday night against the Charlotte Hornets. He made 16 of his 25 shots from the floor, went 40 percent from behind the arc, 10/10 from the free throw line, and added seven assists and six rebounds for good measure.

The Wizards lost by 13, falling to 24-35 on the season. They're entrenched in 11th place in an Eastern Conference which contains just five teams above .500.

-- @RealDealBeal23 drops a season-high 46 PTS for the @WashWizards in Charlotte. #DCFamily pic.twitter.com/rq4YWxgEBZ

And what now? Before the season owner Ted Leonsis set the goal: The franchise's first 50-win season in 40 years.

"Well, we want to make the playoffs," he told The Sports Capitol. "We want 50 wins and I’d like to set a bar that says if we can’t get by the first round and the second round then we didn’t meet our goals. We have to improve upon last year."

John Wall? Out for the rest of the season after heel surgery and then an Achilles injury that may keep him out until autumn of 2020. Otto Porter? Dealt for a pair of expiring contracts before the trade deadline. Markieff Morris? Suffered the same fate as Porter. Kelly Oubre? Packaged with Austin Rivers for the expiring contract of 33-year-old forward Trevor Ariza, who the team would be better off not retaining. The 15th overall pick in the 2018 NBA Draft Troy Brown Jr.? We won't go there. Dwight Howard and his player option for next season? Won't go there either.

Yes, it is no surprise to followers of basketball that the woebegone Washington Wizards are going nowhere fast.

And, yet, the franchise looks certain to stay the course. Certain to retain the last remaining valuable asset, the 25-year-old Beal, who was just named to his second All-Star team.

“We have no intention of trading Bradley,” GM Ernie Grunfeld told The Athletic earlier in February. “We really like his development and the way his game has improved over these years: his character, his work ethic. And we wanna have him as part of our group moving forward for a long time.”

The same goes for Leonsis. He said the the Wizards won't trade Beal and will not tank to rebuild.

“I was asked point blank, ‘Are you going to tank?’” Leonsis said on WTOP. “That’s an offensive question. You can’t go to your organization, to your players, to your coach and say, ‘Let’s plan to lose.’ Tanking is also illegal, you get a big fine if you tank."
In fact, Beal is off recruiting and tampering. Hoping to bring another superstar to the DMV.

"Granted, what we’re gonna do in the offseason and after this, that’s up to Ernie and Ted to figure out," Beal said. "But I know that my job is just to continue to lead, recruit if I can and try to make it work. And we know that John won’t be here, so it’s pretty much in my hands to lead the team.”

And so the Wizards appear destined to continue with Beal and a similar cast of characters next season. Destined to be a middling team in the NBA's lesser of two conferences. Destined for more of the same.

"Ernie always thinks they're a move or two away," Grant Paulsen said on 106.7 The Fan in February. "He's never, I don't think once said, 'Why don't we try to get bad to get good? Why don't we try to start from the bottom and build something?'"
For Danny Rouhier his mind on the Wizards and Grunfeld's leadership has been made up for some time now.
"They are not worth your time," Rouhier said. "They are not worth your time. If you love basketball find another television program to watch."