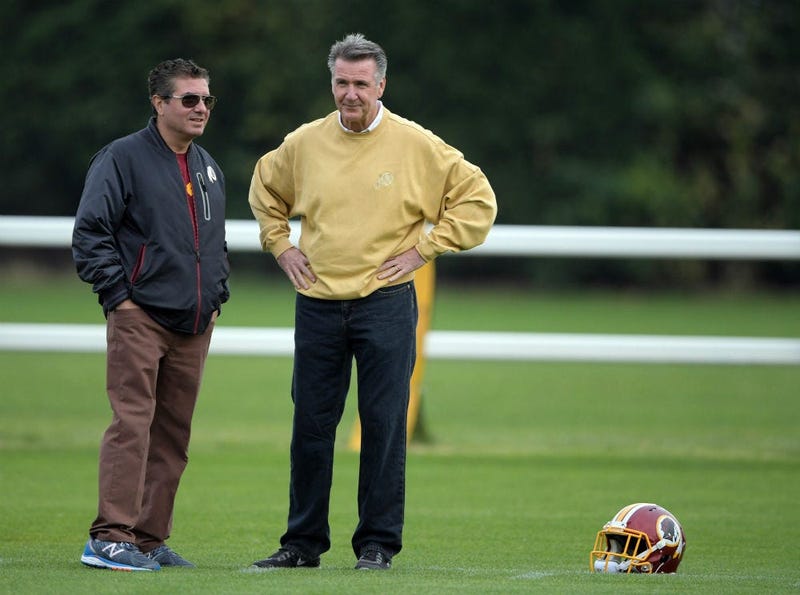 One of the hot questions fans of the Washington Redskins are constantly asking: Why is Bruce Allen still the team president? What is he doing here?
Chad Dukes suggested Allen may remain in his position so he can serve as "chattel" for owner Daniel Snyder. An assertion The Washington Post columnist Barry Svrluga agreed with.

"I think that's a big reason for it. I don't think that anybody in the NFL thinks that Bruce Allen has his job because of his football acumen," Svrluga said on 106.7 The Fan Thursday.

"They've said they're gonna leave the football evaluation to Doug Williams and his crew, so what is Allen's purpose? It's not really to get the new stadium done, I would argue that it is to shield, and deflect, and divert the vitriol from Snyder," Svrluga said.

Allen broke his silence this week at the Senior Bowl, speaking for reporters for just over 15 minutes Tuesday. But Svrluga said that did little to quell criticism around the team.

"The whole point is that, I just spent, you know, 90 seconds talking about Allen and not talking about Snyder. And I think if you're an owner who has been loathed for two decades here, there's some usefulness in that. There's some practicality to having somebody around who might be hated as much or more than you are," Svrluga said.

Snyder, the new owner of a $100 million superyacht, has remained silent for even longer than Allen, which presents its own issues.

"When the owner doesn't speak, in any meaningful way, for – as you pointed out – a decade now, which is just stunning. Then it leaves others to fill in the blank and it provides the fan base with even more skepticism about the owner and the direction, than they had to begin with," Svrluga said. "I think that's a huge error on the Redskins part, if Dan Snyder was confident in his abilities to lead that organization, why doesn't he stand up there and explain all of that?"

Allen did not break much news, but was criticized for saying the Redskins were "close."

Svrluga said that comment was so criticized, because it rings hollow to the truths Redskins fans know: Even before Alex Smith's injury (for which his football future is still in doubt) the team was not close.
"That's what's so frustrating in Allen's words and Snyder's lack of accountability: There's no sort of acknowledgement of what the truths that this fan base feels are. And those truths are: enthusiasm has waned and eroded over time, I don't trust the people that run the place, I no longer want to give them my money, and it's a lot harder to win back my trust and my money than it has been to lose it over time," Svrluga said, echoing what ProFootballTalk's Mike Florio said earlier Thursday: Fans have a tough time trusting the organization.

And yet, Allen, who overseas both the football side and business side of the organization, believes the Redskins were close.

"This place has a team president that thinks back-to-back 7-9 seasons means they're close. 'Close to what?' is what we're probably asking," Svrluga said.