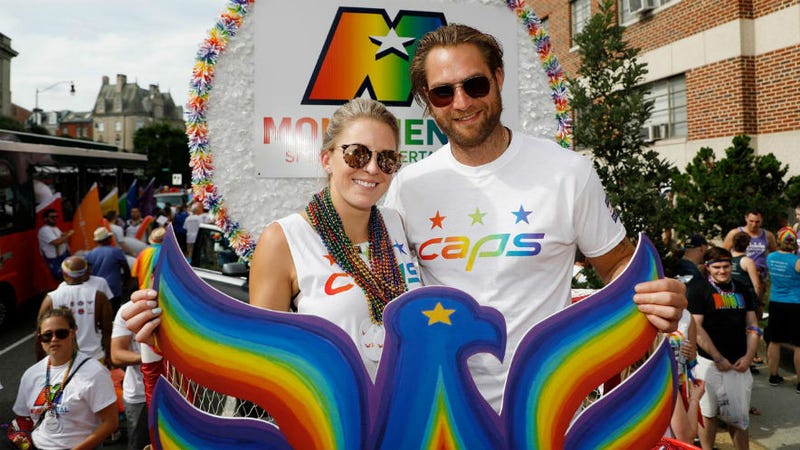 Holtby, who is active among LGBTQ causes and the Human Rights Campaign, was joined by his wife Brandi and dozens of employees and representatives of Monumental Sports & Entertainment, the company run by Ted Leonsis which operates the Capitals, Washington Wizards, and Washington Mystics.
"You won't find a place where there's more people enjoying each other's company than they are here today," Holtby said before the parade, which marked the third year has marched.

“It’s been something that we’ve been able to do for a few years,” Holtby said. “From the first year we were able to do it you can tell just the joy and the change that it can bring. We just want to show our part. The thing I’m most proud of is our team and Monumental are here beside us showing support and trying to teach the younger generation about what we believe in.”

At the #PrideParade w/ The Caps, Bob McDonald, Kim Johnson & so many more! I’m wearing GRAllen’s Cape & FFF’s hat and we’ll be marching w/ the MSE Float - Looks to be an amazing day!
A post shared by Wes Johnson (@wesjohnson) on Jun 8, 2019 at 1:13pm PDT
One lucky Caps fan even got a sweater off Holtby before shedding a few tears of joy.

A moment at #Pride this #ALLCAPS fan will never forget. pic.twitter.com/DRBRmztCRC

We spent the day marching in DC with @Capitals goalie @Holts170. This is what #Pride looks like. Proud to be supported by a great player, team, and league. #ALLCAPS @NHL @NHLPA pic.twitter.com/W05IkKSiQR

MSE rocked the rainbow -- today for #CapitalPride with @Holts170 and Brandi Holtby, @Caps_Slapshot , @WizardsGWiz, @WashMystics Pax and @WashingtonValor Blitz, and lots of friends. We’re proud to support our LGBTQ+ players, staff members and fans not only today but all year long. pic.twitter.com/GBMQqXlmnl

Thank you for sharing yourself with us, DC. We see you, we hear you, we feel you, and we love you for exactly who you are. Our hearts are so full today. --️‍-- pic.twitter.com/Q4wAuD7yzT

D.C. United was also represented at the parade and festival. The club will hold their 9th annual United Night Out Pride Night on June 26th during MLS' "Soccer for All" month.

The Washington Nationals, who were playing in California over the weekend, held their 15th pride night on Tuesday.

Congratulations! #NightOUT at Nats Park was so beautiful that one happy couple went and got engaged during the 7th inning stretch! Here’s to a long life together filled with love and happiness and many more trips to Nats Park! #LoveWins https://t.co/tPBAGx4HR5