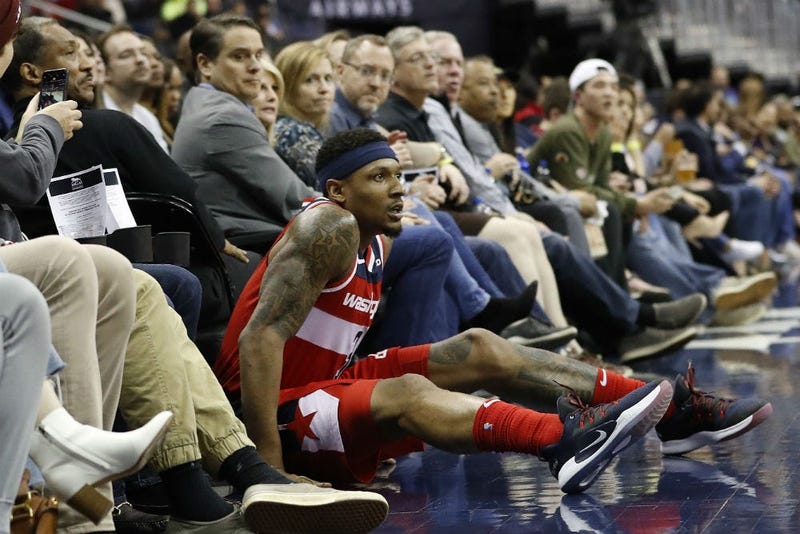 Well, is this good news or bad news?

Despite Bradley Beal's 40-point performance the Washington Wizards suffered another Friday night defeat, losing to the Charlotte Hornets 116-110 at Capital One Arena, a further blow to their slim playoff hopes. With the loss the Wizards fell to 29-40 on the season.
Beal, the last remaining healthy star for the Wizards, played a team-high 45 minutes and went 15-of-29 from the floor (7/13 from behind the arc) and added five rebounds and five assists. Again raising the question: Are the Wizards wasting his talent?

But the main question remains: How should Wizards fans feel about the team's latest defeat?

Should they be sad the team lost again? Or happy the team increased their odds of gaining a higher pick in the NBA Draft?

Well, that depends upon whom you ask.

The vying mindsets in Wizards world as the season winds down. pic.twitter.com/7ttN93WCxP

Time to throw in the towel and get the best lottery odds possible https://t.co/8IANd0H5DR

Put the players firmly in the camp of the upset.

“If (the playoff race) goes down to the wire, we’ll definitely regret this,” forward Jabari Parker said after the game.
Wizards owner Ted Leonsis, who has made it very clear on multiple occasions he is against tanking, would obviously be among the upset as well.
But fans who believe the Wizards need to bottom-out so they can acquire better, younger assets through the draft would be rather pleased. Or, at least, OK with the loss, especially those who want to see longtime Wizards general manager Ernie Grunfeld fired.

However, Leonsis has not demonstrated any interest in dismissing Grunfeld.

"And to this point, Ted's shown no sign that he's gonna make a change," Tim Bontemps told 106.7 The Fan in February. "Until he does, I'm just gonna stick with the bet that would have won me a lot over the last 15 years or so, and say that (Grunfeld's) gonna stick around."

Leonsis says he wants to wait to "see how the season turns out" before deciding the fate of Grunfeld.

For many Wizards fans they don't need to wait for the final game: The 2018-19 season has already been a total failure.

Bradley Beal played 45 minutes in last night’s loss. The plan to eventually have 0 assets or positive things for the Wizards is in motion. Someone please put a stop to this. #FireErnie

This week the divide between fans and ownership came to a head. After the Wizards beat the Orlando Magic a fan shouted to "Fire Ernie!”

But should they really?