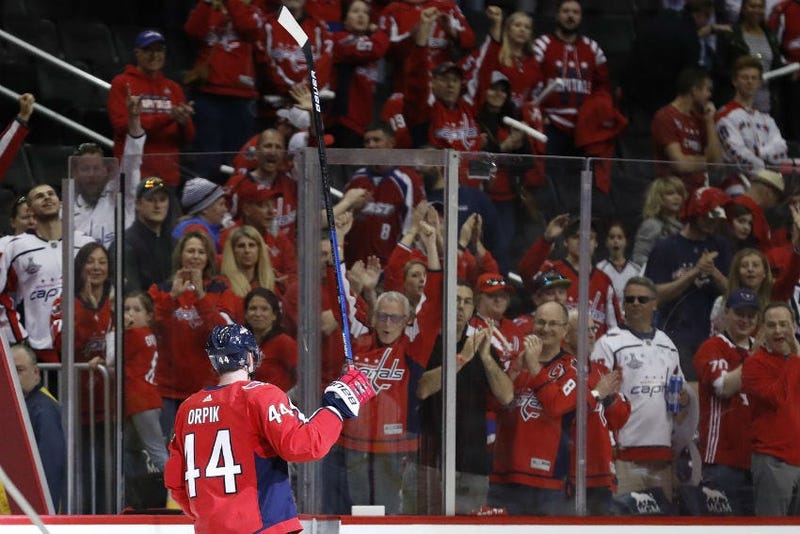 It was another game-winning goal in a huge spot for Brooks Orpik, a player many Capitals fans and to a lesser degree the Capitals, didn’t want or plan to have playing in Washington for these playoffs.

Last year, it was Game 2 of the Stanley Cup Final, a third-period snipe that gave the Caps the lead and their first of four straight wins.

This year, at 1:48 of overtime on Saturday, Orpik took a feed from Evgeny Kuznetsov, who was set up behind the net and fired one home to give the Caps a 2-0 series lead, heading to Raleigh.

Nick Backstrom scored his third goal of the playoffs to open the scoring, while T.J. Oshie and Tom Wilson each had a goal. The Capitals blew leads of 2-0 and 3-2 before solving Hurricanes goaltender Petr Mrazek, who made several huge saves late in regulation to keep it tied.

Here’s our five stars of the game for Washington:

1 – Brooks Orpik: For much more than his goal, he’s probably been the Caps best defenseman in the series despite being on the ice for two of Carolina’s goals. He played a better and more physical game on Thursday, but he was still solid in Game 2. Overall, he’s a +2, 3 blocked shots and 10 hits, along with helping to kill off a critical 5-on-3 for over a minute.

He now has four career playoff goals with the Caps and Penguins. Two of the four have been overtime game-winners for a total of the three-playoff game-winning tallies.

2 – Alex Ovechkin: Not once, not twice but three times – Ovechkin turned defense into offense by igniting a rush. He did so with a big hit to spur the rush and assist for Backstrom’s goal. On Tom Wilson’s marker, he had another big hit and steamed up the left side of the ice, before setting up his linemate for a go-ahead goal in the 3rd period.
A third time, there was no goal, but Ovechkin had a great poke-check in his own zone and raced down the ice after a loose puck before walloping another Hurricane player into the boards in the corner of the offensive zone.

This is exactly what I've been talking about, for those that didn't see it. Again, a third sequence of defense into offense for Ovechkin today. #ALLCAPS https://t.co/dNOm4f3ONo

“Obviously, we have to play both ways. It doesn’t matter who you are. That time of year, it works,” Ovechkin told reporters when asked about these three plays by 106.7 The Fan.

Ovechkin was a +2 and easily led the Caps in hits with seven on the game.

Tom Wilson added: “He covered for me one time. It was a 3-on-1 and he was the last guy back and turned it over. He did a heck of a job.”

3 – Nick Backstrom: Another goal and an assist, but it’s his two-way play that always stands out. He helped kill the 5-on-3 with Orpik and Matt Niskanen, that was a critical juncture.

“This player is so underrated,” Capitals head coach Todd Reirden said. “Most consistent guy for us in terms of year-after-year, game-in and game-out. He flies under the radar a lot. Hopefully, he gets the respect he does after these first two games. He’s always consistent. These are the best two back-to-back games that I’ve seen Nick Backstrom play in my five years here.”

4 – Dmitry Orlov: Orlov created some good offensive chances and had a very good defensive break-up on a rush. He was a +1 with an assist on Backstrom’s goal, while playing 22:31.
5 – Matt Niskanen: Niskanen also had an assist, on Oshie’s goal, killed penalties (the Caps did allow a deflected power-play marker) and played 22:51 at +1 with two hits and three blocked shots.

The Caps had 16 shots on goal in the 2nd period but did not score. They imposed their will in the back part of the third period and in the short overtime.

The key for Monday night in Raleigh? Stay out of the penalty box and refrain from taking shaky penalties in the offensive zone. Also,  don’t squander golden opportunities on the power play. Washington was (0-4), including a gift five-minute major and game ejection penalty to Micheal Ferland for a hit on Nic Dowd.
Follow Chris Russell on Twitter.