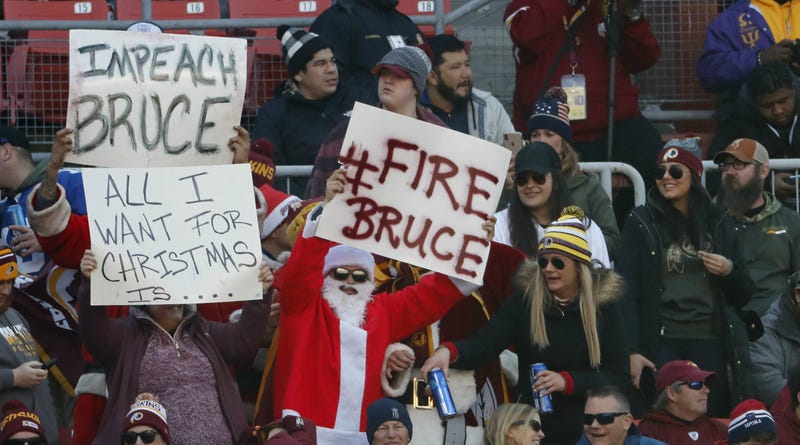 After more than a decade, Bruce Allen’s days atop the Washington Redskins' football operation are coming to an end. Allen is expected to be reassigned by no later than Monday, multiple sources say.

NBC Sports Washington’s JP Finlay first reported that Allen will no longer be in charge of football operations by Monday, the day after the Redskins close their season in Dallas.

According to 106.7 The Fan's Grant Paulsen, team owner Day Snyder informed certain NFL personnel that Allen was told of the decision. However, in a move that will likely anger many Redskins fans who have emphatically demanded Allen’s outright dismissal, Paulsen says he’s heard Allen will stay on to lead the new stadium process.

Was told that Dan Snyder has informed people around the league that Bruce Allen was already informed of the change. Heard he will stay on to lead the new stadium process. https://t.co/UgUHdgatc3

Allen’s been part of more than 100 losses since being hired as an Executive VP and General Manager in 2009. Allen lost the GM title in 2015 when he hired Scot McCloughan, but received a promotion to team President in 2017 after McCloughan was fired.

Snyder has consistently reviewed the football operation every offseason and has even had discussions with other personnel executives around the league in recent years, a league source told The Fan on Saturday. But after a 3-12 season (pending Sunday’s outcome), Snyder finally decided to make the change.

Sources tell The Fan that the reassignment of Allen and the firings of many (if not all) of the team's coaching staff will happen quickly, and the replacements will be named quickly as well.

A source told The Fan Saturday that Lewis had not reached out to former Redskins coach Jay Gruden, despite their work together when Lewis was in Cincinnati.

The executive front is seen as more wide open. Potential candidates, such as ESPN analyst and former NFL executive Louis Riddick, have been mentioned as possibilities in the past, but as of now, there are no front runners for Allen's job. The Redskins do have possibilities in-house, which would potentially include VP of Player Personnel Doug Williams, Director of College Scouting Kyle Smith and Senior VP of Football Operations Eric Schaffer.

The revelation of the stadium role for Allen has been rumored as a possibility for a while. However, it comes just weeks after the the Redskins again failed to work with Congress to secure the RFK site for a potential move back to the District of Columbia.

The Washington Post has reported, for the second time in just under a year, the Redskins and the city could not work with Congress to either purchase or agree on a long term lease of the 190 acres of federally owned land that would allow them to not only build a stadium, but develop the area around the stadium much like the Nationals did with the Navy Yard neighborhood.

Allen is seen by Snyder as an asset in the negotiations because of his political ties and political skills. Allen’s brother, George, served in both houses of Congress and was the governor of Virginia. Bruce has often been described as a politician for his demeanor and how he answers questions.

Front office sources tell The Fan that Allen has been business-as-usual the last couple of weeks as rumors about his pending departure swirled. He has asked the same questions of scouts and assumed the same roles in personnel meetings. Scouts have not been informed of a change, even if Allen has.

The team did not respond to a request for comment. A source did confirm Allen was on the plane as usual as the team traveled to Dallas Saturday afternoon.

news
VIDEO: Joe Biden, at the Lincoln Memorial, calls for unity during 'Celebrating America' special
news
Biden to sign virus measures, requires mask use to travel
news
VIDEO: Inaugural poet Amanda Gorman reveals what she told herself before reciting poem
music
‘This Is Us’ delays new episodes after COVID surge causes production setbacks
news
10 podcasts to keep you up-to-date on US politics
news
For school students, watching the inauguration was a history class in real time