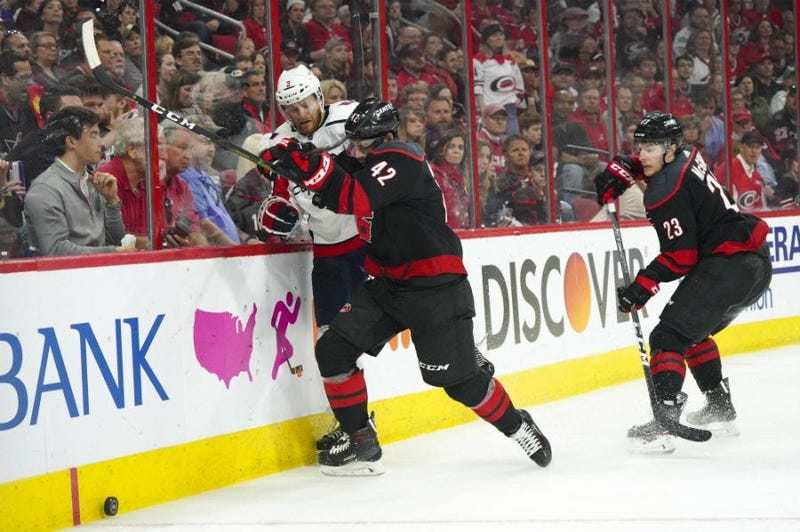 The Caps were in desperate need of a sustained, good start on Thursday night in Raleigh for Game 4 of their quarterfinals series with the Carolina Hurricanes.

What they got instead was a 1-0 deficit just 17 seconds into what turned out to be a series-tying 2-1 win for the home team.

Gone is the Capitals' chance to clinch with a win in Game 5 at Capital One Arena on Saturday night.

The Caps played their best period since the series came to North Carolina in the 2nd, tying it up at 1-1 on an Alex Ovechkin power play bomb. But as has been the case way too often throughout the regular season, the Caps allowed a late goal before the 2nd intermission as their defensive structure and integrity broke down.

Teuvo Teravainen scored after a line change with the middle of the ice in the attacking zone left wide open by several Caps. Brooks Orpik was blown past and around (it wasn't all his fault) and that was ultimately what the Canes needed.

Now - it's time for our "5 Duds" (individual or unit) in the Game 4 loss for the Capitals. It's probably not fair to do this in a tight loss, but away we go.
1. Brooks Orpik & Nick Jensen: The Hurricanes speed and transition is well, hurricane-like at times. While the Caps look tired and old at times.

Orpik was caught out of position on the go-ahead and ultimately game-winning goal, but he was very slow in his recovery to the speed of Teravainen. He flailed his stick around like a fish out of water and offered very little resistance. Jensen had a couple of giveaways (3) with at least one turning into a golden scoring chance. At times, Jensen played OK, but it was far from good enough.

2. Caps Power Play: Yes, they finally broke through late on an extra-man advantage to tie the game, but the first minute-and-a-half or so was awful in that particular advantage. Late in the game, after T.J. Oshie was sent spiraling into the boards on a dirty hit by Warren Foegele, the Caps power play was absurdly bad until the very end when Evgeny Kuznetsov was stoned by Petr Mrazek.

Even though they scored a goal after going 11 straight, the Capitals extra-man play has been a terrible disappointment in the series and really for a good stretch of the year.

3. NHL Officiating: The Caps were robbed of what should have been a five-minute major when Oshie was injured. He left the ice immediately clutching his left arm. "He won't be playing anytime soon," Capitals head coach Todd Reirden told reporters in Raleigh after the game.

Foegele will likely be suspended for Game 5 by the NHL Player Safety department, but he should have received five minutes and a match penalty. It was a clear shot to the back with his stick and not a hockey play in any way. Foegele has three goals in the two games in Raleigh, so if suspended, he would be a huge loss for Carolina, but he deserves a suspension. His unnecessary hit should have resulted in three more minutes of power play time for the Caps late in the third period.

4. Andre Burakovsky & Lars Eller: The reunited third line generated one pretty good chance on a shot by Brett Connolly in the first period, but Burakovsky did nothing in 14:08 of ice time and was a minus one for the game. Eller did have an assist and was mostly fine, but the Caps need greater production out of their third line, which was a huge advantage coming into the series.
5. Jakub Vrana: Yes, he had four shots-on-goal, but he's still a huge missing ingredient to sparking the Caps as he did so often in the regular season and in Game 5 of the Stanley Cup Finals last year. Vrana took a bad early penalty after the Caps were already down 1-0 early in the first period, as well.
The big questions moving forward are these:

Have the Hurricanes completely solved the Capitals in terms of puck possession and control? The Caps defense was responsible for six of the Caps nine giveaways. That can't keep happening.

Can the Caps sustain enough offense for 60 minutes? They were fairly good in the first, really good in the 2nd and mostly dead in the 3rd until a late Kuznetsov chance. Even when the Caps pulled Braden Holtby, the Canes dominated possession of the puck and nearly scored because the Caps couldn't get it back, despite the extra man.

Who will replace Oshie? The Caps new top line consisted of Ovechkin, Backstrom and Oshie. My sense is you move Tom Wilson back up to the first line and perhaps Connolly goes up to the 2nd group with Kuznetsov and Vrana. Or you could bring Travis Boyd up from the fourth line because he has speed and put Chandler Stephenson back on the fourth.