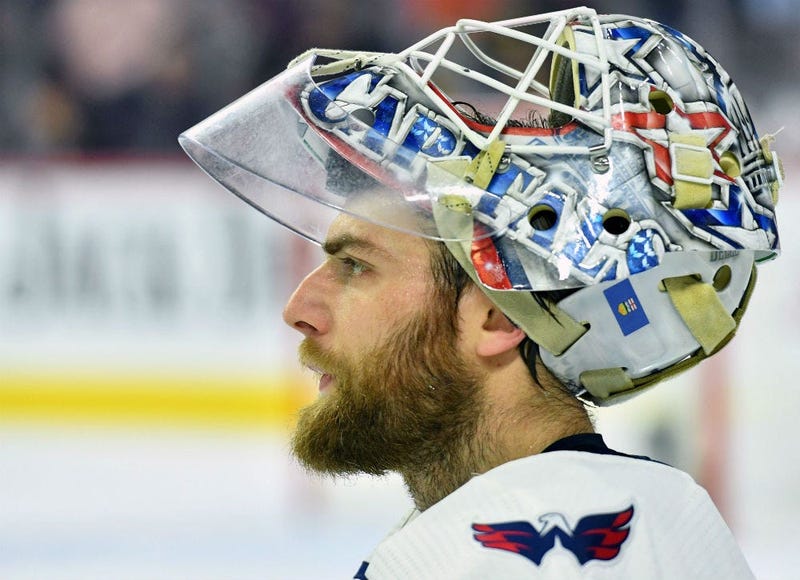 The Washington Capitals will visit the White House Monday, but not everybody on the team will attend.

Caps goaltender Braden Holtby says he must respectfully decline the invitation, according to 106.7 The Fan's Chris Russell.

“I have to stay true to my values," Holtby told the media Friday.

"For me, it's just a personal thing. I believe in what I believe in and I respect those values and think I have to do what I feel is right," Holtby said. "(But) I'll stick by every single teammate that we have and their decision."

Holtby, a native of Canada, is active among LGBTQ causes and the Human Rights Campaign, causes and issues which often clash with the policies of President Donald Trump's administration.

"My family and myself, we believe in a world where humans are treated with respect regardless of your stature, what you're born into. So, I think that's just where it's at in terms of this decision," he said. "You're asked to choose what side you're on, and I think it's pretty clear what side I'm on."

"I wouldn't say it was hard. In the end, I never really came up with a situation where I'd feel comfortable going," Holtby added.

The Capitals Stanley Cup-winning goaltender said the "more important thing is we're just gearing up for a playoff run" and the visit will not impact "our team unity."

"I hope they have a good experience there and then we can get back to hockey," Holtby told the media.
Forward Brett Connolly, who is also Canadian, had already said he would not be among the Capitals visiting, saying, "I respectfully decline."
"That’s all I’ll say about it. Everyone is entitled to their opinion. It’s obviously a big deal and it gains a lot of attention. I’ve been in full support of an old teammate that I’m really good friends with and who I agreed with, and a guy who will be back here I’m sure at the end of the year. That’s all I’ll say,” Connolly said Wednesday.
Connolly was referring to Stanley Cup hero Devante Smith-Pelly, who is black and Canadian, and criticized President Trump this June.

“The things that (Trump) spews are straight-up racist and sexist. Some of the things he’s said are pretty gross. I’m not too into politics, so I don’t know all his other views, but his rhetoric I definitely don’t agree with,” Smith-Pelly said.

However, some in the Capitals organization will attend, including head coach Todd Reirden, who called the White House visit "an amazing opportunity."
"It's something for the last five years, you drive to the rink, you see this (passing the White House), you hear about it, you think about it. I was really excited about the invitation and we'll be going and happy to be going," he told the media Wednesday.
Prague-born forward Jakub Vrana said he would visit, but said it was a personal decision.

"It's everybody's decision," Vrana said Wednesday. "Everybody has certain reasons, but I feel like it's nice to get there to see how's it look inside. I'm real excited for it."

On Friday Capitals forward T.J. Oshie said he would be among the players visiting the White House, but he respects "guys' opinions and decisions."
"As an American you grow up learning about the White House and the history," Oshie told the media. "It’s a dream come true for me.”
Follow Ben Krimmel and 106.7 The Fan on Twitter.