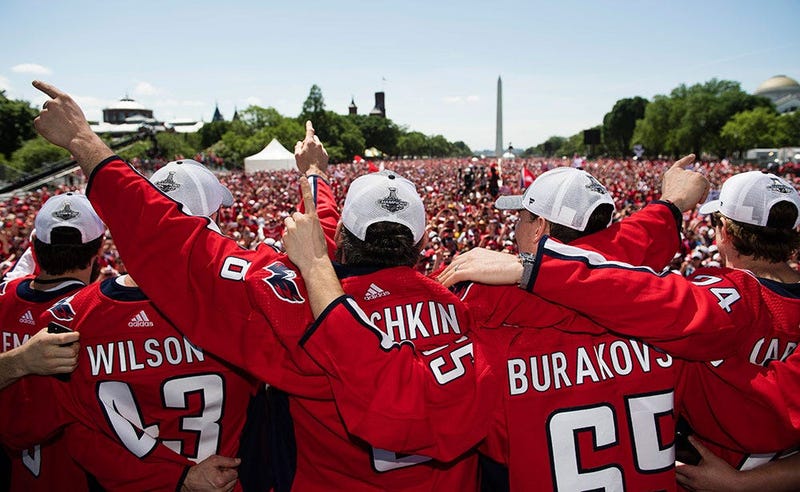 What happened a year ago still doesn't feel real.

June 7, 2018: 40 years to the day after the Washington Bullets won their only NBA Championship in 1978. Could D.C. sports history repeat itself?

It was a normal start to the day. Breakfast and an early morning call from my kids. My son was born in Las Vegas. I lived there for nearly two years, so in a way, this city and location was extremely sentimental and important to me.

It was 100 degrees by noon, and Game 5 of the Stanley Cup Finals between the Washington Capitals and Las Vegas Knights was still five-plus hours away. I wanted to make the walk over to the arena early to try and find Caps fans along the way that were getting the party started. There were plenty. On the way from the hotel to T-Mobile, I probably ran into 20-30 Caps fans, and that number turned into several thousand inside the arena.

I wanted to bring Vegas back to the nation’s capital.

Some more #Caps die-hards that made the trip to Vegas for Game 5 of the #StanleyCup Final pic.twitter.com/1GXF5oIJyD

I passed by the “Beerhaus” Restaurant on the path to the arena to meet fans. Earlier, before the series started, there was a sign with a taunt directed at Alex Ovechkin... "Now Serving: Ovechkin Special. White Russian No Cup" that stood out to me. It was no longer there.

Maybe they knew something right then and there?

After meeting with many fans right outside the arena, it was time to go inside and set up for our pre-game broadcast. The anticipation was amazing. As fans started to pile into the arena, hundreds of Caps sweaters could be seen, mixed in with the Vegas staple of flamingo girls walking down to ice level.
The energy in the building ramped up. The crowd filled in. There were loud chants of “Let’s Go Caps!” ringing throughout the building. John Walton, Ken Sabourin, and Ben Raby were right next to me, high above the ice, getting ready for the most important broadcast of their lives and the only local flavor and call of the game.
Jakub Vrana scored, the Golden Knights tied it. Ovechkin broke the tie, and then Vegas tied it again. The home team took the lead until midway through the third period when playoff hero Devante Smith-Pelly tied the game at 3.
Then magic happened just minutes later with the intensity so thick you needed a knife to slice it, as Brett Connolly’s shot trickled through the pads of Marc-Andre Fleury and Lars Eller cleaned it up for the go-ahead goal in Game 5.

The final six-plus minutes felt like an eternity. The Stanley Cup was in the house and being prepared. Washington, D.C. was going nuts with thousands and thousands of fans flooding the streets around Capital One Arena and inside the Caps' home building.

The countdown was on. With just over one second left, the whistle blew and another face-off was all that stood in between the Caps and a championship.

Eller took it, the clock expired, the Capitals were champions, and I watched it all through my cell phone camera, scared to death that I would (bleep) up the recording of the most important moment in D.C. sports in more than a quarter century. (What do you think? I was so excited it was hard to stay calm and try to keep a steady shot, especially from so high up and far away from the ice.)

At some point, it finally hit me. The Washington Capitals were Stanley Cup Champions, and somehow, someway I was lucky enough to be there for it. And I didn’t even have to pay for my ticket!

The celebration was unbelievable and amazing. I tried to capture as much as I possibly could. Soon after, the NHL allowed media on the ice, so it was a manic rush from the top floor of T-Mobile Arena to ice level and to somehow not slip and fall as I walked onto the ice and playing surface for the first time.

The very first person I talked with was Capitals owner Ted Leonsis, an interview you can hear right here.

From there, it was a sea of hundreds and hugs all around. I caught up with an emotional T.J. Oshie and then Connolly, who had the shot that set up the game-winning goal.

Next, it was an on-ice scrum with now Islanders head coach Barry Trotz, who finally had won his first Stanley Cup.

I was able to get a candid shot of Ovechkin holding the Stanley Cup about two feet in front of me. It’s the backdrop on my cell phone. The picture turned out perfect.
As the celebration on-ice began to wind down, I was right near Ovechkin as he skated and then walked off the ice with the Stanley Cup.

I followed him into the media room, where he answered question after question with the Cup and the Conn Smythe Trophy by his side.

Then it was Trotz, and honestly, I don’t remember who else they brought into that room. It was all a blur. For the first time, the media was not allowed into the locker room so that was the one experience that nobody but players and staff got to experience.

As it should be.

The champs kicked off one epic summer and had a hellacious appetite for alcohol and celebrating with Lord Stanley.

From the locker room celebration to parading through MGM later that night, to sleeping with the Cup and taking public baths with it back home in Washington. It was all magical.

The parade was epic, ending the way it should have: with Ovechkin’s famous words that weren’t exactly clean. But man, did they ring true and sound awesome.

A new champion will be crowned shortly, but nobody can take the memories and the moments that united a city and a region together, like the Caps and the Stanley Cup did one year ago today.

No matter what I do in my career, there won’t be another moment and time that means more to me than that night.

A night we’ll all remember and cherish for the rest of time.