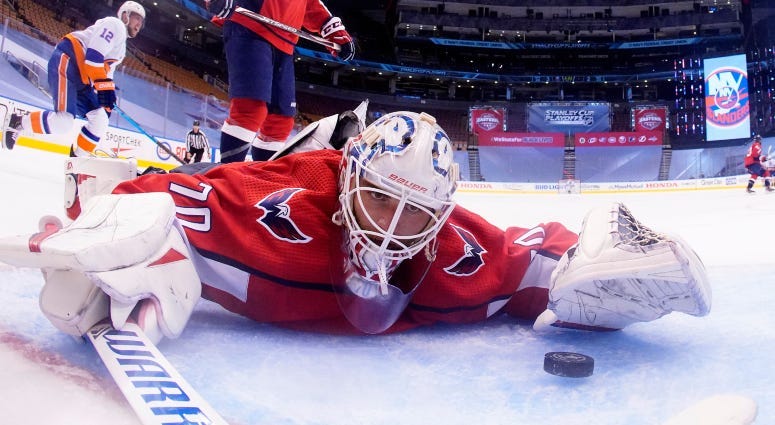 Welcome to neutral ice. The Caps deflated in the third period on Wednesday and watched the New York Islanders sweep by 4-2 for a 1-0 series lead.

This series will be a grinder. It will be gritty with more dropped gloves than a Burlington Coat Factory sale. After losing teammate Nicklas Backstrom to a dirty hit from behind, Wilson gave the Islanders' Anders Lee a few chops to the head. Later that period, Wilson met Anders coming onto the ice with another hard-knocks lesson.

And then Lee gave the Caps headaches by tying the game. Three minutes later, the Caps allowed a short-handed goal by playing lazy defense. They never recovered.

Washington didn't look especially good during the three-game round robin. They lacked juice just like the crosstown Nationals did starting their season in empty stands. Sure, the venues are empty for both teams, but Washington teams with real nicknames usually enjoy home advantage via fans. Nowhere is more pumped than Caps home games.

Now, Washington is looking at its old coach that won the Stanley Cup two years ago on the opposing bench suddenly undressing them in this postseason. It's going to be who lands the final punch in a probable six- or seven-game series. Who gets that final lucky bounce.

Neither team will back down. The opener saw 26 penalty minutes with two fighting majors. The Isles needed to crowd together with three people in the penalty box. (So much for social distancing.) Wilson was in the middle of a six-player scrum among his several bouts.

T.J. Oshie scored a pair, but Ovechkin wasn't heard from again after ringing the pipe early. The Caps' captain is always the key no matter Oshie's excellence. Wilson can retaliate, but the Caps needed to finish off the Isles early and instead looked overwhelmed in the final 20 minutes.

Surely, the outcome would have been different in Washington. But no matter, if the Caps are to advance, they need win anywhere like the Nats did last fall.

Home, sweet home is only a song anymore.