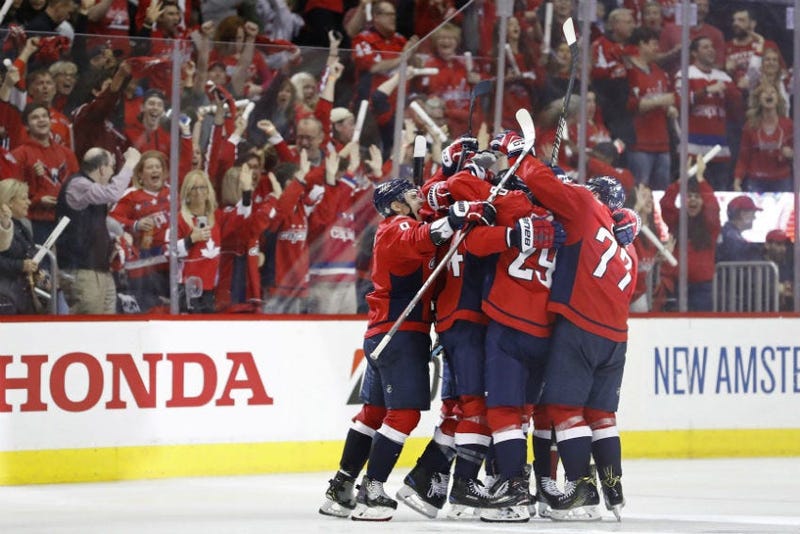 Once again, early in the first period, the Caps looked to be in complete control.

The symbol of that control was T.J. Oshie, kicking his right leg in the air in celebration of his goal, after putting the Washington Capitals up 2-0. It looked like the defending Stanley Cup champions were off and running. The scare from Game 1 was behind them and Saturday would be a cruise.
WATCH: Caps grab another 1st-period lead

But, just like in Game 1 of the series, the Carolina Hurricanes, fought back. Twice in Game 2, the Capitals saw leads evaporate, something that did not happen Thursday.

But once again, the Capitals were able to come out victorious.

Unlikely hero Brooks Orpik took a pass from Evgeny Kuznetsov and slammed the game-winning goal over Canes goaltender Petr Mrazek's shoulder just under two minutes into overtime to give the Capitals a 4-3 win and a 2-0 series lead.

Who's your batya? #Caps take 2-0 lead over #Canes. #ALLCAPS More at https://t.co/3IuX90K0mc pic.twitter.com/r8FLrPsYAS

"Orpy is a secret weapon," Alex Ovechkin said postgame. "Any time he's on the ice, when he take a shot, it's always dangerous."

Despite a pair of pretty goals and some stellar play from Ovechkin, who tallied two assists, it wasn't always pretty for the Capitals.

The Caps' 2-0 lead in the first period lasted just under six minutes when the Canes scored in somewhat controversial fashion when Lucas Wallmark's goal stood despite calls for goaltender interference.

Goaltender Braden Holtby claimed he was interfered with and the Capitals challenged the play, but the refs saw nothing doing.

The game became significantly more physical in the 2nd period, most notably was Micheal Ferland's hit to the head of Caps' forward Nic Dowd. Ferland was ejected for the hit and the Caps had a five-minute power play to work with.

But the Capitals were unable to convert with the man-advantage thanks to some exceptional goaltending by Mrazek, who was sensational all night.

Mrazek made 24 saves on the night, but came up big for his team time after time Saturday. Late in the 3rd period with the score tied at 3-3, Tom Wilson made a bid for his second goal of the period but was stopped by Mrazek.

Tom Wilson came *that* close to netting his 2nd goal of the 3rd period. Instead we get overtime. #CapsCanes pic.twitter.com/3qjAD1OemW

While the Capitals won, they were numerous issues: The Caps took several poor penalties (including a pair of high sticks by Dowd), came up empty on the power play (including that 5-minute major) and lost 63 percent of faceoffs.

But, thanks to Orpik, the defending champs have a 2-0 lead. Doing exactly what they had to do: Put the Canes away early.

The Capitals will look to take one more step to the 2nd round Monday night in Raleigh.