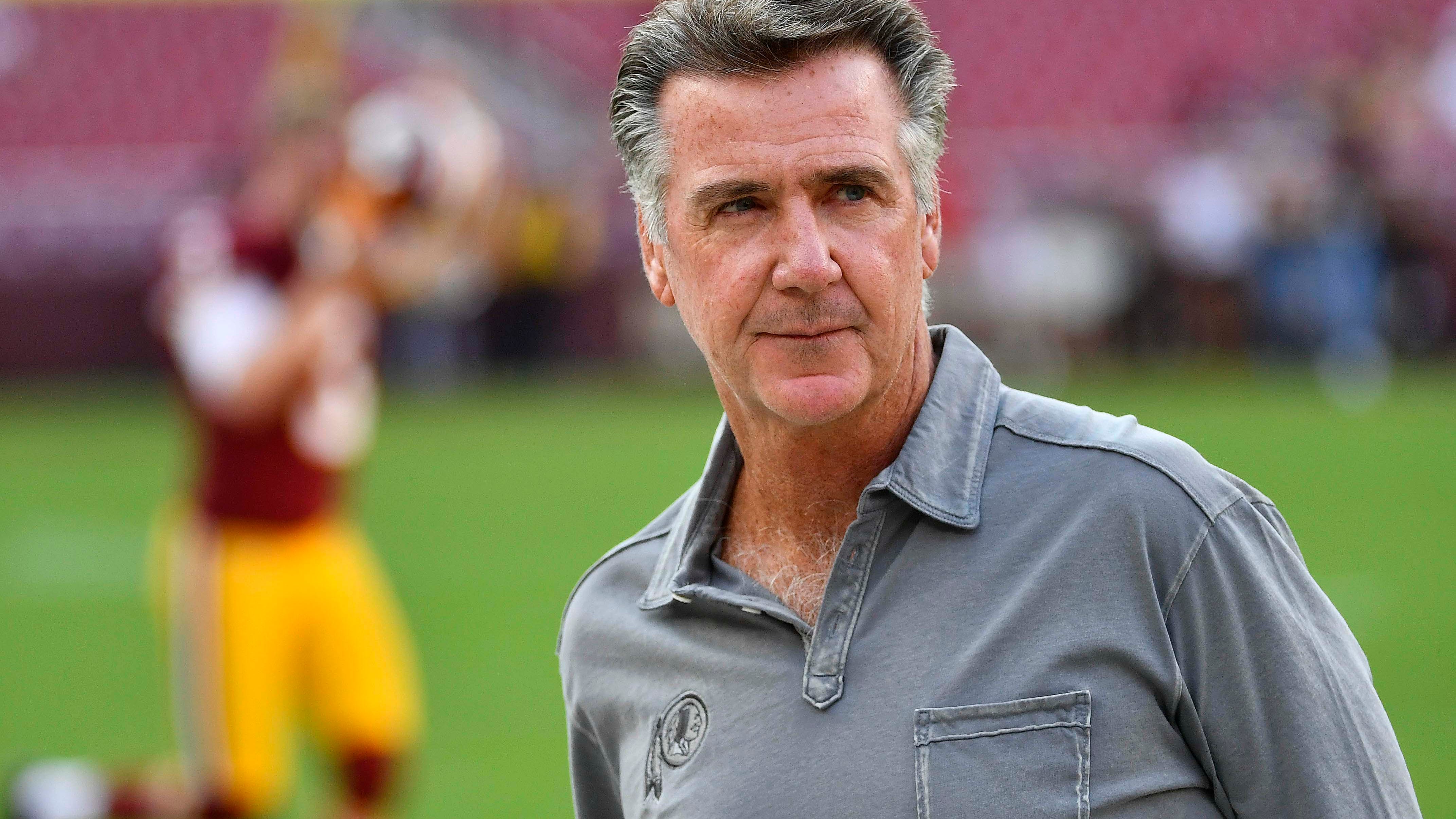 Redskins great Charles Mann wasn't emotional at all when he heard the team would be changing its name. In fact, he was happy the organization finally chose to correct what he views as an injustice towards Native Americans.

If they decided to change the color scheme, though, well Mann just couldn't go along with that.

"You better not change that. Burgundy and gold," Mann told 106.7 The Fan's Grant Paulsen and Danny Rouhier. "That would be a travesty, to change the color. Then I really feel like you are disrupting the franchise. Changing the name, the slogan if you will, the nickname, is one thing, but changing the colors would be devastating."

As for the name itself, "the team is still the team," said Mann. "A name doesn't really mean that much. So I was happy that it was happening. I couldn't believe it. I waited till the next news cycle the next day to just confirm that it was definitely true, because Snyder's been very adamant that he would not change the name."

"But when you start messing with people's pocket books, things can change," he said. "I'm grateful, though. I think it's a good thing. I think where we are in the world regarding race relationships and everything, I think it's been an injustice all these years for the Native Americans, and so I'm happy for the change."

Rouhier, a lifelong Redskins fan, made note of his own nostalgia for the name, saying it feels like his memories are being washed away and asking if Mann could sympathize with that feeling.

"No, why are we washing them away? We're gonna always have those memories," Mann said. "Memories are memories, and they're great memories, but we've gotten to a new era of this franchise and, hopefully, as we turn the corner, we can start winning again. I mean, I hate to have to look back 25 years to have any great memories.

"In the last 25 years, there haven't been a lot of good memories. You'll always have that. We can always look back on that. We're always going to be those teams that won those Super Bowls. You know, when I walk into Redskins Park, I see those three trophies sitting in the case – they're not going to be removed. So it's just a name. It's still the same Washington franchise."

About walking into Redskins Park. That's not something Mann – who's third all-time in Redskins history in sacks (82) after being passed by Ryan Kerrigan in Dec. 2018, and who is a four-time Pro Bowler and two-time Super Bowl champion with the team – does much of anymore.

The interview took a grimly sad turn as Mann was asked how he feels the organization has treated its alumni in recent decades, whether he still feels welcome and included.

"Well, I don't agree with that," Mann said. "And I don't even know how to put it into words. I don't think it's something Dan Snyder has done."

"(Bruce Allen) came in and really tried to include us, but I think it just was done a different way," he said. "And I can say this because I played at another franchise. I played my final season with the San Francisco 49ers, and so all I can measure it against is how the 49ers treated me for that one year and how they still treat me, and then how I'm treated by the 11 years I spent with the Redskins. I'm just being honest, I feel way more at home in San Francisco with the 49ers."

Mann won three Super Bowls in his career, two with the Redskins (XXII, XXVI) and one in his final NFL season with the 49ers (XXIX). It's that 1994 San Francisco team to which Mann says he still feels a familial connection.

"They invited us back to a reunion of the Super Bowl team in '95 last year and I went and had a blast," he said. "It was a great time with the guys. My wife was telling me, 'Why are you going? They're not gonna remember you. You were only there one year.' And I did not feel that at all. I felt included, welcome.

"We had suites for just us, the players. I didn't sign any autographs. It was all about the guys and being together with one another. And then they had us come on the field at halftime and acknowledged us. It was really nice. And I haven't had that same warm and fuzzy in Washington."

"Hey, I live five minutes from Redskins Park. I go by there every day," he said. "I don't ever stop. I know people in there. I'm happy to see Donnie Warren get in there."

Warren, who spent his entire 14-year playing career with the Redskins (1979-92), was with Ron Rivera in Carolina and just joined the Redskins' front office as a senior pro scout last week.

"Doug Williams lives right down the street from me, who works there," Mann continued. "But I don't feel the warm and fuzzy. And again, I'm not blaming Dan Snyder. I don't know how to blame it, or what to blame it on, but I don't feel as welcome as you just said."

Paulsen mentioned he thought the one thing Allen did well as team president was reuniting Redskins alumni during their annual homecoming games.

"I went to one of those and was a little disappointed," Mann said. "Well, first of all, if you want to go to a game, you can go to a game as a former player. You've got to reach out to the organization on the Wednesday before that Sunday game and they'll provide two tickets for you. But those two tickets are sitting in a suite with their suite owners."

"So now I get two free tickets," he explained, "but I've got to go sit with guys I don't know. And you could say, 'Hey, well you could get to know them. They could do business with you.' But how about I just want to go to the game and enjoy the game, and just watch the game. So I'd rather pay my own money and sit and enjoy the game, instead of having to entertain suite holders. So, to me, that cancels that free ticket thing out. To me."

Mann contrasted it to how he's treated by the 49ers, the team it bears repeating for which he played only one season.

"If you want to go to a game, you let 'em know, you get to go to that game, and you're sitting in a suite with nothing but former and current players," he said of San Francisco. "The injured ones that might not be playing might be sitting up there as well. So you're in a controlled environment with your peers and I don't have to play Charles Mann, the former athlete. I can just sit there and hang out with my boys and enjoy the game."

"As far as the alumni coming back, I went to an alumni event. I think I've been to two of them since Bruce Allen started that when he came back," he said. "I went to the thing and then they had us separated, because I was a part of the 70 Greatest Redskins, so when it came to going onto the field to kind of announce the alumni, only the 70 Greatest came out there.

"And so I'm sitting there talking with Tony McGee, who was my mentor and the reason why I did all the things I did in the NFL, and then I had to tell him hang on a minute, and then we went out on the field and got honored. And he's a former player and a Redskin, and he didn't get honored."

"And so I just was very taken aback by that and was disappointed, because this should be an inclusive thing," he said. "That's just a little bit, and I didn't get on here to (say this), but you guys led me there and I'm just being honest with you."

Mann made clear he doesn't expect anything from the Redskins organization and actually feels somewhat uncomfortable with the idea of taking the spotlight away from current players, something he recognized during his last visit to training camp, which he said was at Redskins Park.

"All of a sudden we're drawing fans and they're wanting to talk to us, because we won, and I feel like I'm taking away from the current players and I don't want to do that," he said. "That's not my goal. I just went out to watch a practice and ended up signing about 100 autographs, and I felt bad for the current players because they were over there talking to us former players.

"And so I'm careful to know that my day is done and it's now on these new guys and the new Redskins, and I try to stay out of their way."

"But when I'm in San Francisco, the times that they invite me there, it's just a different feeling," he said. "It's hard to explain it, but it is a different feeling and I wish we could capture that and have that here, because there's a lot of us that still live in the area."

"And if the team starts winning and if they can ever do what we did, then I think some of that may change, and maybe a different posture," Mann went on to say. "But right now, I don't always feel welcome over there."

Despite feeling unwelcome, Mann still feels emotionally invested in the team, keeping up with them during the season (even though it ruins many Sundays for him).

"I'm getting my dose of it because, at the end of the day, I played 11 seasons here," he said. "People don't know this, but I've had over 20 surgeries – I'm getting ready to go in for another surgery – 15 knee operations, a right hip replacement, a lower back, fingers that go every which way but loose. I'm 59 years old. This is the stuff you don't hear about."

"I was talking to Tony McGee the other day and he was talking about some heart ailments that he has and how, he hit 60, and then all of a sudden it felt like he was instantly going back and forth to the doctor for different things," he said.