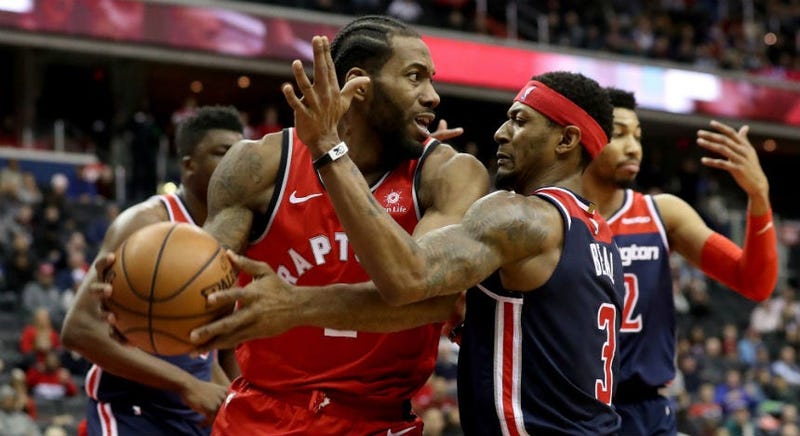 ESPN's Adrian Wojnarowski reported while the Clippers were preparing to lure Leonard, they went to the New Orleans Pelicans to ask about guard Jrue Holiday and the Washington Wizards to ask about Beal. However, "those guards weren't available in trades," Woj reports.

In the end, Leonard agreed to a four-year, $141 million deal with the Clippers early Saturday morning after the Clippers reached an agreement with the Thunder to acquire George in exchange for Shai Gilgeous-Alexander, Danilo Gallinari, and a bounty of future draft picks.

This would indicate Beal is likely staying in Washington for the time being, something owner Ted Leonsis wants. Earlier this year Beal indicated his desire to stay in Washington and his appreciation of being kept in the loop by Leonsis.
Wojnarowski reported in June the Wizards are preparing to offer a Beal a three-year, $111 million contract extension this summer. (Beal has two years remaining on a five-year, $127 million extension he signed before the 2016-17 NBA season.)
"I’d be naive to say I wouldn’t be (interested in extension talks)," Beal told The Washington Post at the end of June. "Washington is where I’ve been the last seven years, going on eight. It would be great to play in one place forever. But at the same time, you want to win and make sure you’re in a position to do so. I’m definitely going to evaluate who we hire as the GM and who we pick up on the team. All that plays a factor.”

"I haven’t even been offered it officially. Until that happens, I’ll wait and think about it. I’ll have an ample amount of time to process everything and make a decision when the time is right," Beal told The Post.

The Wizards have yet to hire a permanent general manager after firing Ernie Grunfeld and have used Tommy Sheppard as an interim since April.
This isn't the first time Beal has been the subject of trade rumors this offseason with the Pelicans and Miami Heat as possible destinations.
Head coach Scott Brooks told The Sports Junkies after the NBA Draft he hears the murmurs, but Beal is the type of player "you want to build your program around."
"Yeah, you see all the rumors. Of course, there's gonna be rumors, everybody's gonna want a guy like Brad. You're not gonna find guys like Brad often and we have him, he loves it here. We'd love to keep him and I'd love to coach him forever," Brooks said. "He's made the All-Star team for three years. He's a two-way player, he's going to get better, he's only 25."
Of course, trading the all-star guard may be something the Wizards might have to consider. And if Wizards fans take anything away from George's seemingly out of nowhere trade to the Clippers it should be this: Anything can happen in today's NBA.
Follow @BenKrimmel and @1067theFan on Twitter.