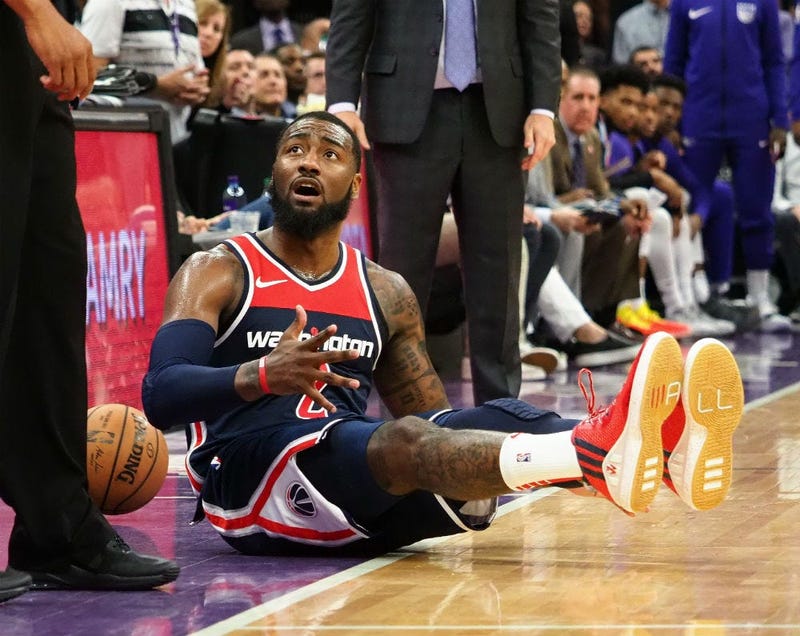 The John Wall Clubgate back-and-forth entered its second day Friday. (Incidentally the same number of wins the Washington Wizards have in the 2018-19 season: two.)

What began on Thursday with ESPN's Stephen A. Smith called out Wall for some of his off-the-court activities.

Wall responded on an Instagram live the same day, admitting to going clubbing: "I go to Rosebar on Saturdays. What? Not supposed to party once in a blue while? The f---. Where you be at? Opera? Living Room?"

Friday on 106.7 The Fan, Grant Paulsen and Danny Rouhier had words for the former No. 1 overall pick in the 2010 NBA Draft

"I have defended him to the ends of the earth, I love John Wall," Rouhier said. "The excuses how it's someone else's fault. Last year they got the guy out of town for you, because you couldn't get along with Marcin Gortat. Now you want Otto Porter run out of town?"

Then Rouhier, who was shattered by the Wizards after Game 1 of the season, had more for John Wall:

"It is your fault, John. It is your fault that we're in this mess. You! It's on you. I'm sick of it. I'm with (Paulsen), I'm now exhausted by it. All of your numbers that are good are down, all of your bad numbers are up. You are worse than you were a couple years ago. That's understandable: wear and tear, knee injuries, terrible lifestyle choices that you continue to make and are now defending on some stupid Instagram rant because Stephen A. Smith yelled at you. Stop all of this. Win basketball games, perform immediately. Change your act."

"You've put too much mileage on those legs to be going out until 5 o'clock in the morning," Rouhier continued. "He can do what he wants, he's a grown-ass man, who's part of the second-worst basketball team in the NBA. Enjoy that. And the 47 million dollars is crippling this franchise for eternity. They are in purgatory. You were given the keys to the kingdom and this is what you've done with it. Congratulations on all of that. Make an Instagram video about me now if you want to. Tell me that I'm 'hating' or some other kinda nonsense. You are doing the wrong thing. Please, thousands of people still care and you're making it worse."

Smith, who called for the Wizards to blow up the roster on Wednesday, responded to Wall's response on Friday's episode of 'First Take.'

"John Wall for the Washington Wizards did a little video yesterday because I pointed out that he showed up at a club Rosebar, No. 1 club in DC right now, OK. Let me be very, very clear to all of y'all out here, yes I'm a reporter, insider, all of that stuff. But I stick to what you do on the court. I don't get into people's personal business. But if you end up on video, on Instagram, or in the police blotters, guess what? That's no longer private. I'm not dimin' you out. I'm pointing out what everybody knows. I got a video of this man at the club. The night before the opener!

"Now, the bottom line is, John Wall, he wasn't disrespectful to me, he never is, I got love for the brother. But he does come across right now as being a bit disrespectful to that Washington Wizards fan base. You better watch yourself bro, because when them people raise up and come out after you, life is going to be very, very hard for you in D.C. unless you humble yourself. Watch it. I'm not talking about me, we good. But that crowd in D.C. they got their eye aimed sorely in the direction of that man. And if you think you can handle that, you got another thing coming."

'First Take' co-host Max Kellerman agreed with Smith and added, "The reason John Wall is being scrutinized is 'cause his production fell off. That's the reason. That's why."

Smith, with ever more to say, had more on the Wizards on Twitter.

Hell, as fly as that club is, it might be my downfall too, eventually -- https://t.co/3TvUnHvbpI

Ten games down, 71 games left for the Wizards.