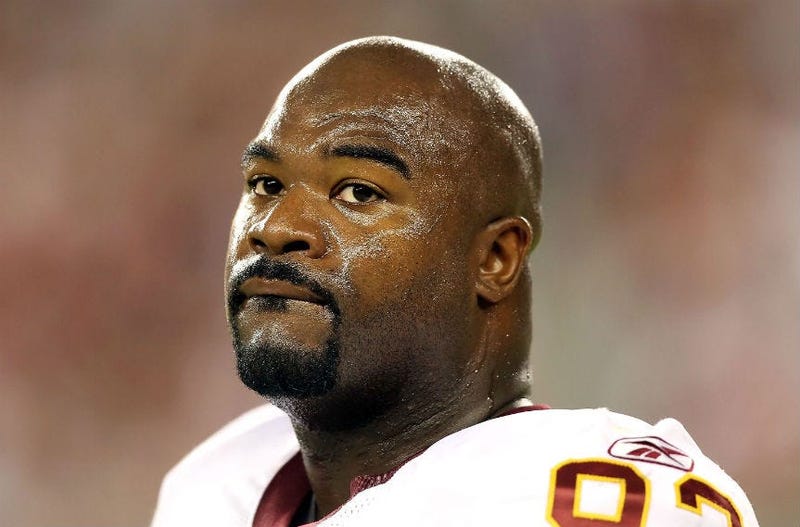 Former Washington Redskins defensive lineman Albert Haynesworth announces he is in need of a transplant amid a battle with kidney disease.

Haynesworth, who played 10 seasons in the NFL including two in Washington, announced he is "in dire need of a kidney" in an Instagram post on Wednesday evening.

Well this hard for me to say but my doctors said I should reach out to my family, friends and fans Some of you may know I’ve been battling kidney disease for a few years now the time has come family, friends and fans I’m in dire need of a kidney mine have finally failed me on July 7 2019. It’s hard to believe from being a professional athlete to only 8 season in retirement that my body has taken another major blow. First with the brain aneurism 3 seasons out of the NFL to now my kidneys failing me. But the bright side of this latest ordeal I can ask for help by asking for someone to generously donate a kidney. If you are interested in giving this precious gift please call Vanderbilt at 615-936-0695 and hit option 2. GOD BLESS thank you for your prayers and thanks for sharing this message. #VFL #TITANUP
A post shared by Albert Haynesworth (@haynesworthiii) on Jul 10, 2019 at 4:30pm PDT

The picture in the post shows Haynesworth in a hospital bed at the Williamson Medical Center in Franklin, Tennessee.

This is not the first health scare he has suffered since retiring from the NFL eight years ago. Haynesworth, who turned 38 last month, said he suffered a brain aneurysm in November 2014.

"Nobody really knows: I almost died," he told Nashville radio station 104.5 The Zone in March 2016. "I had two brain aneurysms that were nearly rupturing. I went and talked to my doctor in Florida, and he was like, 'Man, your blood pressure is through the roof. I'm going to admit you.' They did a lot of tests and found the aneurysm that was rupturing at that point."

Haynesworth remained in intensive care for 11 days following surgery. "I've been OK. It's really hard to remember, and I'm not saying that just because of the concussion thing," he said, making reference to former football players who suffer effects of head trauma. "A lot of things, I just can't remember. I don't feel as sharp as I used to as far as problem-solving and answering questions and things.

"It sounds crazy, but sometimes, writing my own name, I kind of forget the signature of how I normally write. Or sending long texts, my words get backwards. It's crazy, but hopefully as time goes on, I get better."