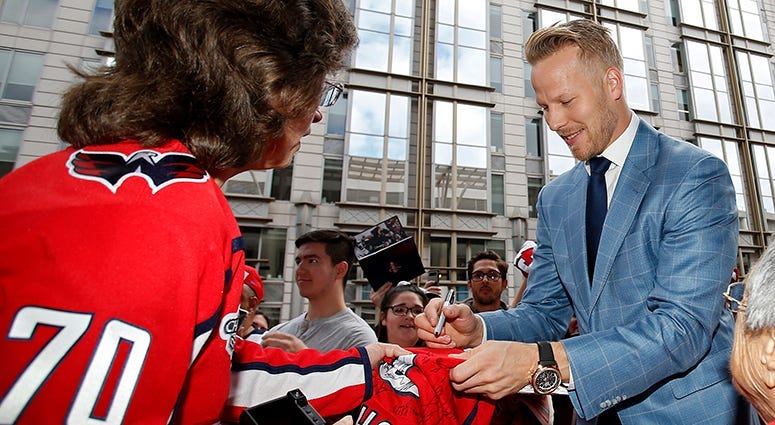 It’s been eight days since the Washington Capitals became Stanley Cup Champions for the first time.

And in honor of keeping the party and celebration going for as long as possible, we give you the "Great 8" reasons and moments the Caps hoisted Lord Stanley's Cup.

Follow along with our countdown for the next eight days.

No, not Alex Ovechkin. He’s coming later. This one is about the man who really got the party started. The first player from Denmark to ever win a Stanley Cup.

Lars Eller’s game-winning goal in double-overtime in Game 3 of the Eastern Conference Quarterfinals at Columbus was everything and then some. Without his heroics, the Caps are probably home for the summer a long time ago. “Tiger,” as he is known to his teammates, started this magical run and essentially finished it in Vegas.

Without a hard charge to the net on a Tuesday night at Nationwide Arena in Ohio, after Columbus hit the post earlier, the Caps may have been dead on arrival. Instead, they had another chance and won the first of four in a row.

Knock, knock. On the doorstep, @lellerofficial gets it done for the @Capitals in #StanleyCup Playoff double-OT. pic.twitter.com/tm4X6HvSVW

"It gives me chills. Amazing memories," Eller told 106.7 the Fan when asked about one of his ultimate thrill rides he helped provide.

The common connection to how the playoff party for the Caps started and how it ended in Game 5 of the Stanley Cup Final? Brett Connolly’s shot setting up Eller for an opportunity to score a game-winning goal.

On this critical score in the Caps first playoff win, Devante Smith-Pelly is also involved in the rush as he dished the puck to Connolly off an outlet feed from Brooks Orpik out of the Capitals defensive zone.

Who would have known then, what we know now. Not only would this goal ignite a magical run of 16 wins on the way to a Stanley Cup -- but Eller, Connolly, Smith-Pelly and Orpik would all figure prominently in the Capitals four-straight victories over the Vegas Golden Knights in the Stanley Cup Final, especially in their two wins in Las Vegas.

Just how big was that Eller goal in Columbus? On Wednesday, to wrap the championship season, Coach Barry Trotz recalled when he knew his team had something special.

It was that night.

“The next puck, if they make it, they win the game – I’m pretty sure we’re not talking today,” Trotz said, knowing he also would have likely been out of a job.

“They hit the post, (then) Lars Eller scores. That moment, I knew we were going far.”