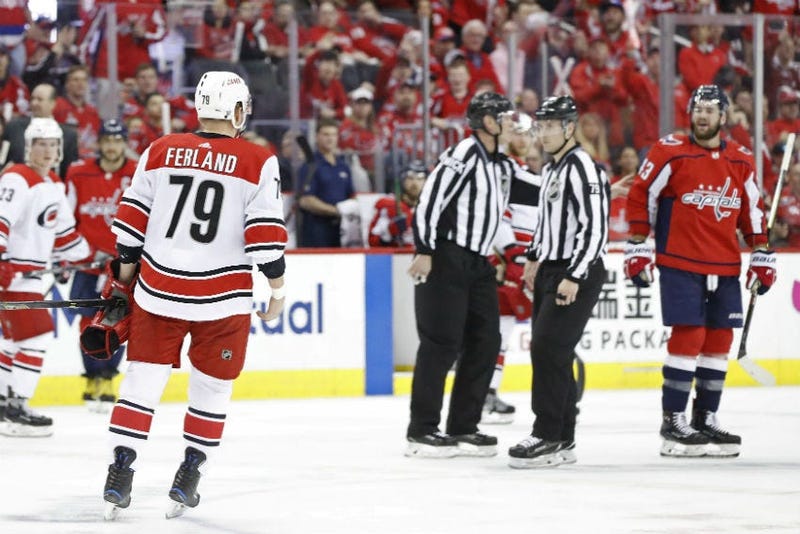 A physical Game 2 of the Stanley Cup Playoffs became even more physical during the second period.

The hitting seemed to go up a notch in the second period after there were several high hits and late hits in the game's opening period, including one from Washington Capitals captain Alexander Ovechkin, which resulted in a two-minute minor for elbowing.

The worst of all the hits came from Carolina Hurricanes forward Micheal Ferland just 4:09 into the period.

This is how #Canes' Micheal Ferland's day ended. However, the #Caps couldn't score on the 5-minute power play. #ALLCAPS pic.twitter.com/2A5UOmXraO

Oh, that was nasty. And totally unnecessary.

It was a scary moment for Capitals fans and everyone connected with Caps forward Nic Dowd.

The hit did not go unnoticed by the Caps bench and this could carry over to Game 3 on Monday night in Raleigh.

Tom Wilson barking at Ferland his entire way off the ice. Ferland being escourted to dressing room by official. Remember that for Monday.

However, the referee's decision to issue a five-minute major penalty and misconduct for Ferland.

While speaking to McGuire, Brind'Amour made reference to the Ovechkin hit, saying he thought it contained more contact to a player's head.

After the call was announced, Brind'Amour was apoplectic.

Dowd was able to return to the ice during the second period.