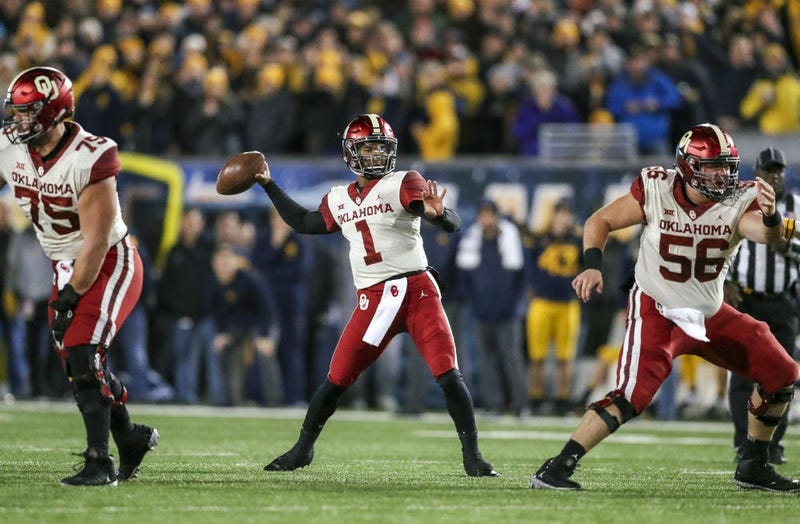 Kyler Murray didn't want to answer any questions about football Friday.
In an interview with Dan Patrick, the Heisman Trophy winning quarterback out of Oklahoma was suddenly struck silent when asked about the NFL Draft and was very noncommittal about whether he will play in the NFL or MLB.

Kyler Murray dodged Dan Patrick’s questions about the combine and his pro day with some very awkward silence pic.twitter.com/10plRiVtIM

Well... that was something.

The Redskins, who hold the 15th overall pick in the 2019 NFL Draft, have been linked with Murray in a few mock drafts this offseason and may want to get a firmer commitment from the diminutive QB if they are interested in selecting him.
Analysis on whether this hurts Murray's draft stock are varied. 106.7 The Fan Redskins reporter Craig Hoffman reported a league front office member said interviews like this "are doing real, but not irreversible damage."

Talked to someone in a front office yesterday and these interviews are doing real, but not irreversible damage.He’s a QB. Can’t lead if you’re not all in. He hasn’t decided yet, which is why the damage isn’t irreversible but the idea that he could bolt isn’t sitting well. https://t.co/74DigGS3Ci

On the other side, 106.7 The Fan's Chris Russell said he didn't find the interview to be a big deal.

I don't know..I think we are making a huge deal out of one awkward interview when the kid doesn't want to completely tip his hand. Now should he be doing them? No. Is this one spot that big of a deal to me? No. I could be wrong. #Redskins https://t.co/ni6PCKVmn8

J.P Flaim and Chad Dukes both seemed to disagree with Russell's assessment.

Hey @EBJunkies, sure you want to draft this guy? https://t.co/jZ5EtphIrk

Much like Murray himself, the Redskins have remained noncommittal about drafting a quarterback and said next to nothing about their plans for 2019, as well.

Sounds like the QB drama will continue in Washington.

(Here is Patrick's interview with Murray in it's entirety.)