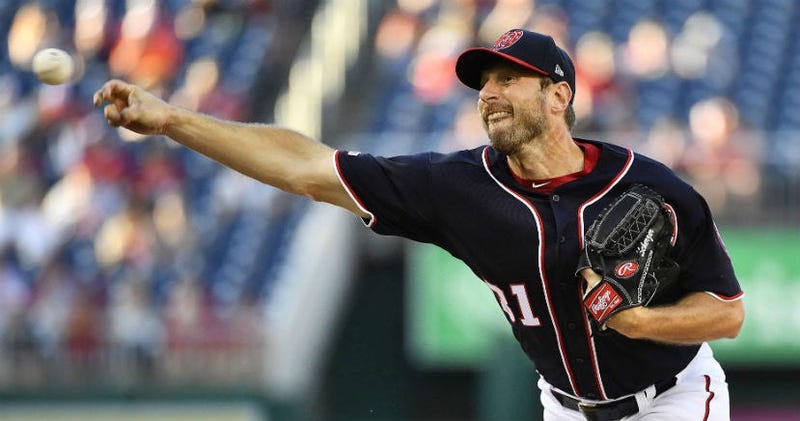 One unnamed Major League Baseball told The Athletic: "I would not want to face that guy."

They were talking about Washington Nationals ace Max Scherzer. And Friday night, the most intimidating pitcher in baseball, did it again: seven innings, three hits, two runs, and 10 strikeouts.
While it doesn't take an MLB player's batting eye to tell you Scherzer has nasty, nasty stuff, sometimes it takes getting a closer, more in-depth look to really get the full story. And thanks to GIFs from Rob Friedman, aka Pitching Ninja on Twitter, baseball fans can get that full picture and understand just how nasty Mad Max's stuff really is.
Before getting into more of the nerdier GIFs, here is Friday night's strikeout montage.

So how did he do that?

One of the more nerdier things the Ninja does is overlay multiple pitches from one pitcher to show how different pitch-types follow the same path before going in opposite directions and bamboozling batters. This is known as “tunneling.”

How about a fastball and changeup to Arizona outfielder Jarrod Dyson:

Finally, here is Ninja's pièce de résistance from Friday night: Three Scherzer deliveries to three different batters each of which resulted in outs: A fastball, slider, and a changeup.

"Thanks, for coming, be sure to tip your server," Scherzer said. (Not really, but you get the point.)

"He's one of the best in the game," Diamondbacks manager Torey Lovullo said after Friday's game. "I felt like we squared up a couple balls, obviously, for the home runs. ... I thought our guys were grinding, but he's one of the best."

These GIFs give a bit more information any baseball fan who has ever yelled, "What was he swinging at?" after a batter flails at an offering a foot or more out of the strike zone.

And for those who thought this headline of mind-blowing Stuff from Scherzer was clickbait-y, here's a bonus strikeout montage from Mad Max's June 2 start against the Reds.

(Again, a big thanks to Pitching Ninja for providing this service and for MLB for allowing him to thrive.)
Follow Ben Krimmel and 106.7 The Fan on Twitter.