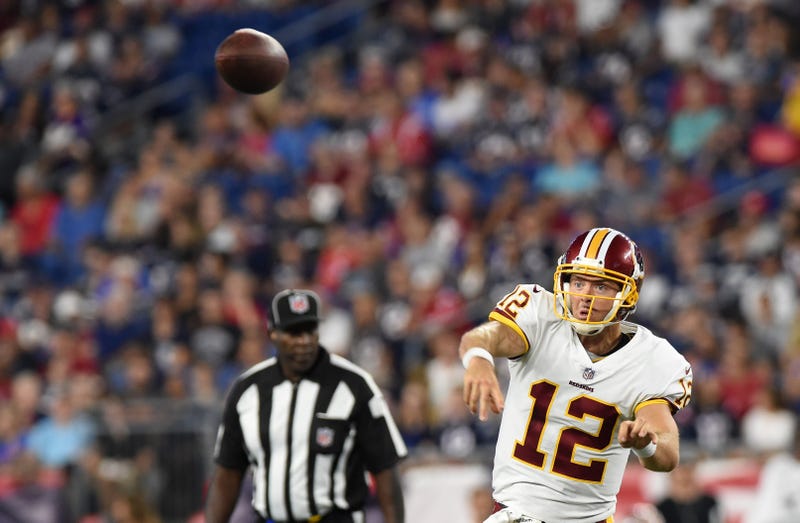 August 10, 2018 08/10/2018 4:59 am
106.7 The Fan Redskins beat reporter Craig Hoffman was in the press box at Gilette Stadium as the Washington Redskins took on the New England Patriots for Game 1 of the NFL preseason. He combined his observations with post-game interviews to write his top-three takeaways from this week in football:
The Redskins lost in Foxboro Thursday night on the scoreboard, but the losses to key personnel are certainly the most important thing.

Stat of the day: Zero. As in I project zero of the Redskins offensive starters started tonight’s game. One is a technicality in that Guice didn’t start (Rob Kelley did), but none of his projected offensive teammates suited up. Only three (Nicholson, Ioannidis and Quinton Dunbar, who may only start in nickel) did on the defensive side.

I typically don’t elaborate on the stat of the day, but I’m breaking my own rule here. This isn’t a big deal. The Redskins have joint practices in just a few days. There’s way more work to do there than there would be in one series of preseason action. There is zero reason to freak out and zero reason to pretend to be mad about Gruden playing it safe here.

Quote of the day: “All is well.” – Derrius Guice to NBCSW’s JP Finlay, as he sucked on his trademark lollipop after the game. The Redskins hope the MRI he’ll get Friday says he’s right.
Follow Redskins beat reporter Craig Hoffman and 106.7 The Fan