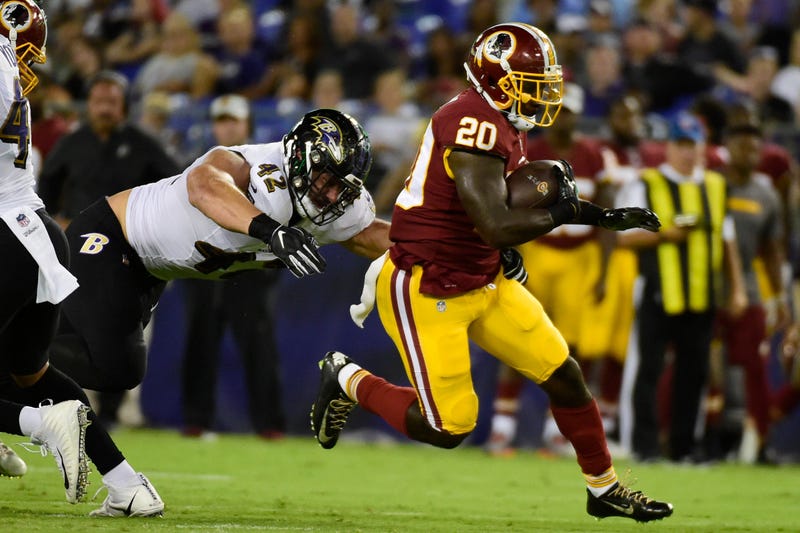 August 31, 2018 08/31/2018 4:06 am
106.7 The Fan Redskins beat reporter Craig Hoffman was in the press box at M&T Bank Stadium as the Washington Redskins took on the Baltimore Ravens for Game 4 of the NFL preseason. He combined his observations with post-game interviews to write his top-three takeaways from this week in football:
The Redskins have completed the preseason with only one major injury, which was close to their sole goal of getting out the preseason with no injuries. After Derrius Guice went down, the team waited until Samaje Perine was hurt before bringing in Adrian Peterson. He played so well in his first game that he didn’t play on Thursday night. Here are some thoughts on the guys that did:

The roster is cut to 53 on Saturday at 4 p.m. After that? Well, the roster might change again. It’s vital to remember that the roster Saturday isn’t necessarily the roster by Monday. By Monday, there will be waiver claims, free agents signed and maybe a trade or two. There will also be a practice squad. Then? Week 1 is finally here.

Stat of the day: Five, as in the number of first downs Kapri Bibbs was responsible for, of the six third-down conversions the Redskins had. All three of his catches were third-down conversions. He also had two monster blitz pickups on the back-to-back second-quarter conversions by Trey Quinn. He’s on the team for me.
Quote of the day: “I thought I did better things in the game, but that’s all anyone wants to talk about,” said Trey Quinn of his viral third-down celebration. “It was fun. It was the first thing that came to mind, I guess. It was really weird. I’m a weird guy. The world saw that tonight. Secret’s out, I guess!”
Follow Redskins reporter Craig Hoffman and 106.7 The Fan