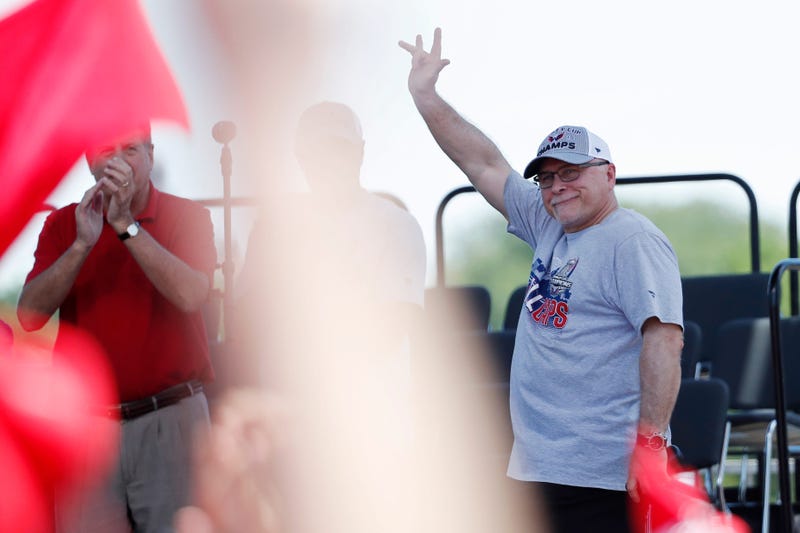 When Barry Trotz and the New York Islanders are in town on Friday, Trotz will finally get a video tribute from his former employer, as revealed by his successor, Todd Reirden, on 106.7 The Fan.

“There will be a video tribute to Coach Trotz during the game, and very well deserved, obviously,” Reirden told the Sports Junkies on Wednesday. “You can’t say enough about Barry and the impact that he had as the head coach. I wouldn’t be here in this organization if it wasn’t for Barry, so I have a ton of respect for him."

Trotz left on icy terms just weeks after celebrating the Stanley Cup victory, a shocking move at the time, based on a contractual impasse with the team. He resigned and hit the open market, a move that the team could have blocked but chose not to.

He needed little time in finding a landing spot with the Islanders, who paid him closer to what Stanley Cup Champion coaches can command.

Fast-forward to the first game of the 2018-19 regular season, and the Caps put on an elaborate pregame ceremony commemorating the championship season before raising the banner to the rafters.

At no point were Trotz, assistant coaches Lane Lambert or Mitch Korn, or departed players Jay Beagle and Phillipp Grubauer featured in the tribute video about the team, a move that many observers thought was in poor taste. Now, the team has a chance to make things right, even if Trotz publicly says that it's not necessary.

“I wasn’t there that long, so I’m a little bit surprised that they would do that,” Trotz told the New York media this week. “But I am thankful and appreciative of that."

The players want to see Trotz have his moment as well. Holtby told the D.C. media: "It means a lot to us for them to get the right kind of treatment."

Trotz will also use the quick stop in Washington to say goodbye to a few key people. He was hired in New York just days after leaving Washington and just weeks before training camp began. He had little time to say goodbye to the friends he made within the organization over his years with the team.

"They all became very close. They have some wonderful people there," Trotz told the media. "To be able to say some goodbyes to people I never got a chance to – from that standpoint, it’ll be real nice."