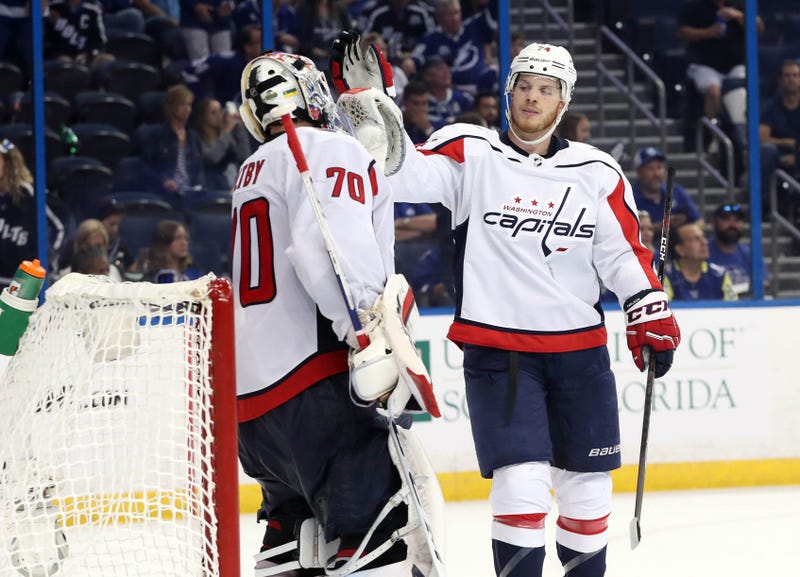 The Washington Capitals moved one step closer to playing for the holy grail, Lord Stanley’s Cup, as they beat the Tampa Bay Lightning, 4-2, in Game 1 of the Eastern Conference Finals.

The Caps pulled away in a critical second period, expanding a 2-0 lead into a 4-0 lead and while there were a few tense moments in the final 20 minutes, Washington put a chokehold on the Bolts after Tampa made it 4-2 and sucked the life out of the Lightning.

Per NHL.com play-by-play, the Capitals allowed ONE shot-on-goal in the final 5:52 of the win after Braden Holtby turned aside a Nikita Kucherov chance. That shot came in the waning seconds of the victory.

You may remember – the Capitals did something similar to this last Saturday night in the final 4:38 where they allowed NO shots-on-goal after Jakub Vrana’s go-ahead and ultimately game-winning goal in a critical Game 5 win over Pittsburgh.

This time, they had a two-goal lead, but their grasp was starting to slip away as Ondrej Palat beat Braden Holtby with a wrist shot short-side, a goal Holtby almost surely will have a few bad dreams about.

That goal came with 6:57 left in the third period, and overall from that point, the Caps only allowed four shots on Holtby.

Suffocating defense was a major theme of the night, as it was during their Game 6 win in Pittsburgh and the third period of that win last Saturday night over the Penguins.

The Caps allowed 21 shots-on-goal for the entire game, 11 of which came in the third where Washington’s Alex Chiasson took a couple of minor penalties, the first of which led to Tampa’s first goal of the night as Stephen Stamkos blasted one home on a one-time feed.

In the first 40 minutes, the Caps suffocated Tampa’s speed and transition game by allowing only two shots in the first and eight in the second period.

Washington did not allow Tampa to have any shots on net for the final nine-plus minutes of the first period.

Of course, along with great defense, the Caps needed a productive offense. Some stars that shined in the game one win.

**The goal scorers were Michal Kempny, Alex Ovechkin (PPG), Jay Beagle and Lars Eller (PPG) so they clearly get a tip of the cap, but that’s easy.

**T.J. Oshie had two assists, both on the power play and won two huge face-offs to set up both extra-man goals against a weak penalty kill, which was our number one key for a Capitals win in the series. Oshie also had an outstanding play inside the Caps defensive blue-line which spurred a break and led to a great 2-on-1 chance. Just a fabulous game by Oshie.

**Evgeny Kuznetsov assisted on the Caps first two goals, setting up Ovechkin for the one-timer (Nick Backstrom style) and Kempny as he feathered the puck back to him. Later, Kuznetsov skated gracefully behind the net and swooped in for a chance. A very solid performance.

**John Carlson had an assist on Kempny’s goal, his ninth of the playoffs and also hit the cross-bar on a great pass by Chandler Stephenson.

**Speaking of Stephenson, he was fabulous as he has been for much of the postseason and especially in the third. He had the feed to Carlson for the near goal and also set up Lars Eller on a 2-on-1 for a great scoring opportunity and big save by Tampa.

Stephenson also had some other good rushes and helped kill part of the final minutes with good forechecking and pressure.

**Jakub Vrana had five shots-on-goal and had plenty of jump and could have had at least a goal, maybe two.

The pivotal moment of the game was a Tampa goal on a break-in wiped out by having too many men on the ice and instead of a 1-1 game going to the first intermission, it was still 1-0 and the Caps got a power play out of it.

It took the Capitals three seconds to inflict pain as Ovechkin blasted one home from center-point and made it 2-0 sending a stunned Amalie Arena crowd to the concourse and the Lightning back to their locker room to lick their wounds.

For one night, they wouldn’t be able to repair them fully with Game 2 ahead on Sunday night in Tampa.