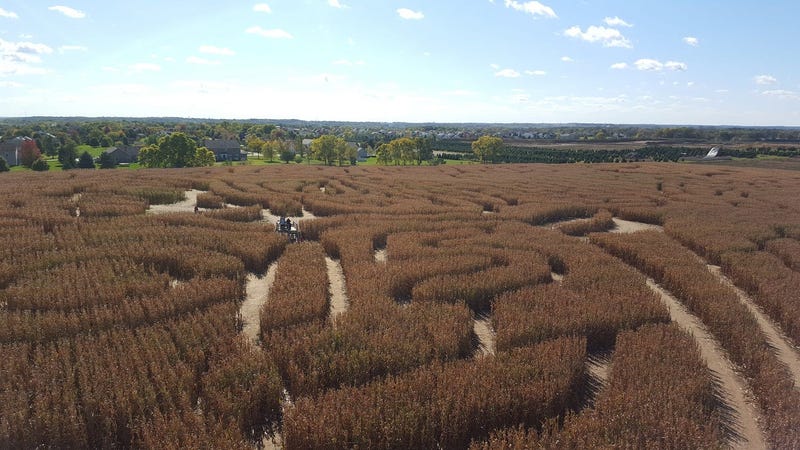 Coming off of the first Stanley Cup Championship in franchise history, the Washington Capitals were the logical local team to get the corn maze treatment this fall, and two local farms were happy to oblige.

The first was Bowles Farm in Clements, Md., officially open to visitors this season including 106.7 The Fan columnist Rick Snider:

Bowles Farm in Clements, Md. has a Caps corn maze. $1 off it you wear red or a Caps Jersey, which lots of folks did. Lot of activities for kids. pic.twitter.com/nAlLIlQF09

@MonSportsNet Look what Bowles Farm (Clements, MD) did for Halloween this year... pic.twitter.com/gQKeqSbol8

Did the #ALLCAPS themed corn maze today at Bowles Farm. Take a drive down to Southern MD it’s completely worth it. pic.twitter.com/rLVUEG9f4G

The 15-acre field features the familiar Caps logo, as well as text for 2018, #ALLCAPS and Rock The Red. I'm no lawyer, but this field probably does the trick of attracting Capitals and other D.C. sports fans without incurring the wrath of the Caps' legal department for copyright infringement.

The second corn maze, located at Greenstreet Gardens in Lothian, Md., is a bit more direct in naming the Capitals, along with the logo, Stanley Cup, 2018 and ALL CAPS. It too is open for the season:
Are you guys ready to #rockthered?! Join us for the opening weekend of our Fall Festival this weekend, 9/22 & 9/23 from 10:30-5:00. Let’s kick off fall by celebrating the #stanleycup win! ---- For more information, check out our Facebook page! . . . . . #washingtoncapitals #fallfestival #ALLCAPS #unleashthefury #letsgocaps #redrockers #slapshot #washington #capitals #nhl #rockthered #cornmaze
A post shared by Greenstreet Gardens Of MD & VA (@greenstreet_gardens) on Sep 21, 2018 at 6:16pm PDT

Bringing a corn maze from conception to creation is about as difficult as you might imagine, according to Greenstreet Gardens owner Raymond Greenstreet II.

"Every year, it's kind of a struggle. We kind of work for about a month to try and figure out what we're going to do for our corn maze, and we thought, 'Let's honor the Caps and the Stanley Cup,'" he said. "Which was awesome, because everybody in South County is huge fans."
Follow Brian Tinsman and 106.7 The Fan on Twitter.