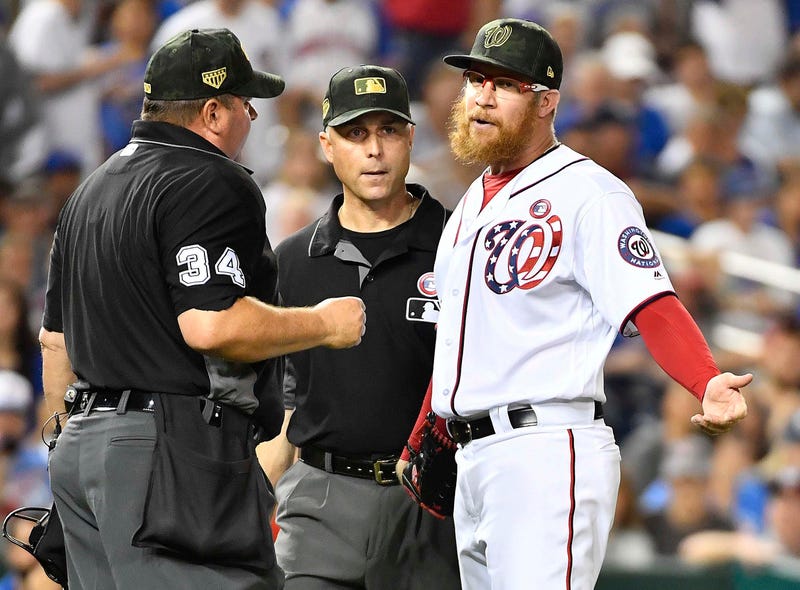 It would seem that Chicago Cubs manager Joe Maddon had a bone to pick with Major League Baseball, and he didn't mind if Washington Nationals closer Sean Doolittle was inconvenienced in the process.

That's basically what happened on Saturday night as Doolittle started the ninth inning. After kicking and firing his first pitch, here came Maddon from the opposing dugout and made straight for the home plate umpire.

His point? That Doolittle allegedly lifts his leg to throw a pitch and then toe taps before extending his leg forward and throwing the pitch.

Why does he care? Because of earlier this season, when one of his pitchers, Carl Edwards Jr., was told he could not do what Maddon perceives to be a similar move.

The only problem is that those two pitching motions look nothing alike:

In order to placate Maddon, the home plate umpire asked his crew if they had seen an illegal step in Doolittle's delivery. The crew agreed that they had not and Maddon retreated to the dugout, but not before telling the umpires that if they didn't enforce his version of the rule, then he would protest the outcome of the game.

After the next pitch, Maddon yells from the dugout that he will be protesting the game. So ensues another conversation with the umpire crew, as Doolittle gets understandably upset on the mound.

Maddon insists that he is formally protesting the outcome of the game, and the home plate umpire signals up to the official scorekeeper with a 'P' motion.

This is the pitch that caused Maddon to protest. Decide for yourself if Doolittle's foot touches the ground at all:

Joe Maddon has protested the Cubs vs Nationals game, arguing (presumably) that Sean Doolittle was throwing illegal pitches. Here's the pitch that ultimately led to the protest. pic.twitter.com/vcN5ccbUYo

Doolittle cruised through the ninth and closed out the game with a save.

Back in the clubhouse, he didn't hold back in describing Maddon's move.

"In that moment, he’s not trying to do anything other than rattle me and it was kind of tired," Doolittle told reporters. "I don’t know. Sometimes he has to remind people how smart he is and how much he pays attention to the game and stuff like that. He put his stamp on it for sure."

As if to prove Doolittle's point, Maddon walked back his promise to protest the game, claiming on Sunday that he talked to the MLB league office and elected not to formally protest it, despite repeatedly interrupting the game to do so.

When asked to explain the decision, Maddon offered this:

"I really didn’t anticipate a whole lot to be done with it," Maddon said. "I still don’t agree with the conclusion because I think it’s exactly what Carl did, only a different version of it."

Yes, you read that correctly. It was exactly the same thing, but a different version of it. Then, Maddon played the protective parent card.

"But the point was, I would not be a good parent had I not spoken up for my guy, and that’s what I was doing (Saturday) night: speaking up for Carl," he said. "It’s just to eliminate any kind of gray area there for the future because it’s going to happen again somewhere. And you’re just trying to delineate what is right and what is wrong."

Trying to delineate what is right and wrong, but not committed enough to protest the game.

UPDATE: After the Cubs didn't formally protest the outcome of the game, Doolittle took to Twitter to offer his feelings on the situation, calling for MLB to clarify the rule.

----‍♂️ ok but we still need further clarification from MLB on this. Rule 5.07 says a pitcher can’t take a second step to home with either foot. I don’t really think a toe tap or hesitation violate the spirit of the rule. And it’s not being consistently applied. https://t.co/BcypV24TMV

I’ve also heard that Edwards originally got his delivery cleared during spring training, then 2 weeks later it was deemed illegal. I realize this is only affecting a few pitchers in the league, but we need clarification so this doesn’t turn into MLB’s version of the tuck rule.