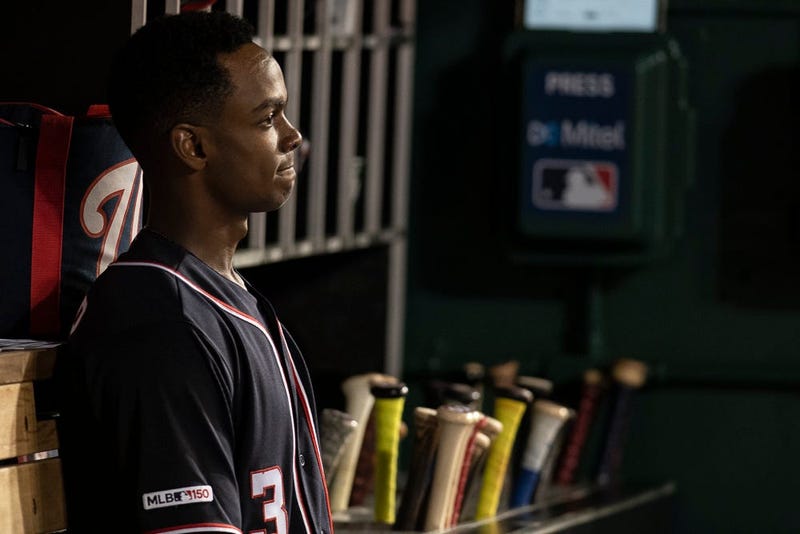 The Washington Nationals dropped two of three to the Philadelphia Phillies this weekend, and that wasn't even the worst news.

The weekend started by sending young slugger Juan Soto (back spasms) to the 10-day injury list on Saturday. The move was retroactive to May 1, when he last played, meaning he could come back early next week.

That roster move was barely finalized before the team lost two other starters with cringe-worthy injuries.

First, Matt Adams dove back into first base to complete a gritty defensive play. He jammed his shoulder in the process and was unable to lift his arm over his head as he left the field. He was also added to the injury list with what is being called a left shoulder strain.

"His shoulder is pretty stiff," manager Dave Martinez said. "He’s not going to be able to play for a few days. So we thought the best thing with him is to get him healthy."

He was replaced on the roster after the game by minor leaguer Jake Noll, who is the last remaining player on the 40-man roster not in the big leagues (or on the IL).

In the same inning, Michael A. Taylor dove for a low liner on defense. His glove stuck in the ground but his body did not, causing him to do a series of awkward things to his arm:

Here’s the play on which #Nats’ CF Michael A. Taylor apparently injured his left wrist. Not supposed to bend that way... pic.twitter.com/cYpAHaZzLD

Perhaps surprisingly, Taylor remains on the active roster, but did not play Sunday. If he requires a trip to the IL, it might have to wait until Tuesday, when Anthony Rendon could come off. Anything sooner would require a corresponding move for the 40-man roster and could bump one of the players currently on the 10-day IL to the 60-day IL.

Until then, the Nats have only three healthy outfielders, including Andrew Stevenson, who was called up to replace Soto on the roster. Jake Noll got the Sunday start at first base, but he could yield time to Howie Kendrick, as Martinez looks for the right combination in an injury-depleted infield.

As MASN reporter Mark Zuckerman noted: "the Nationals now are without their Nos. 2, 3, 4 and 5 hitters from opening day, plus the guy who had been filling in as cleanup hitter in the last week, plus potentially their No. 4 outfielder."

At a time when the Nats need to dig out of an early-season hole, they are missing a few more key shovels.