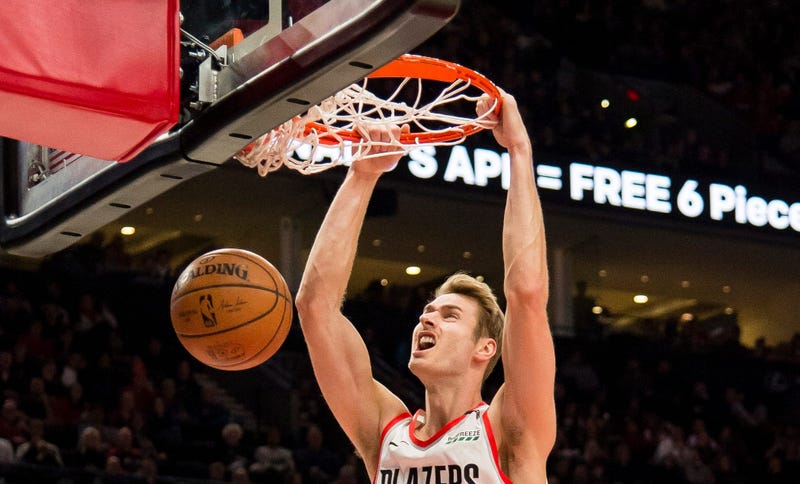 Remember Jake Layman, the University of Maryland that most experts expected to be a middling NBA prospect?

Those experts can eat their turtle-fearing hearts out, at least for one day.

Layman was an unstoppable force for 12 minutes on Friday, dominating the New Orleans Pelicans defense and scoring 20 points in the second quarter.

It was a sizzle reel of everything Layman can do on offense, scoring from beyond the arc, driving to the net, dunks, alley-oops and jumpers:

Considering the Trail Blazers overcame an early game deficit to win by 16 underscores Layman's importance on the day.

The truly bizarre stat is that Layman played just 18 minutes in the game and did not score a single point in any other quarter. Sometimes hot streaks are just like that.

So what does this have to do with Maryland?

Considering Layman has a whopping 3.3 points per game average across his three-year career, his best work is still left over from his college days. The TV announcers gave credit where credit belongs:

The kid out here schooling the world on #FearTheTurtle!
A post shared by Maryland Terrapins (@marylandterrapins) on Jan 19, 2019 at 7:20am PST

"We were talking about this the other night. What does ‘Fear the Turtle’ mean? How can you be afraid of turtles? Maybe it’s a snapping turtle or something," the announcer mused. "I am officially afraid of turtles. I fear the turtle.

"If this is the standard of it right here, this hot hand, then I fear all turtles from now on."