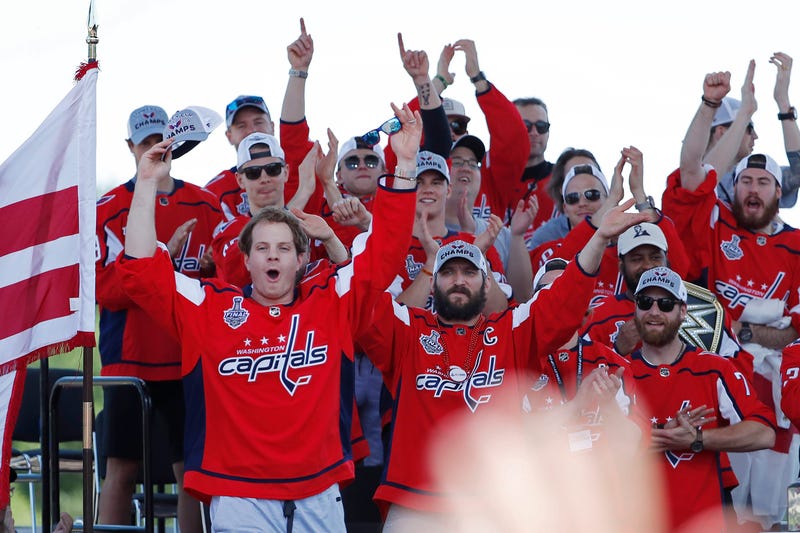 In a season of firsts, the Washington Capitals entered the offseason on Thursday with another: a happy season breakdown session with the media.

After a week of partying, players got to reflect on the season's triumphs and the possibility of defending the Stanley Cup title next season.

The only major piece with uncertainty for the latter is John Carlson, who will likely hit free agency for the first time in his career after completing a six-year deal in 2018.

With the possible exception of coach Barry Trotz, Carlson represents the team's biggest decision this offseason.

It was a career year for the Caps defenseman, as he scored 15 goals and 53 assists for an NHL-leading 68 points from a defensive player. He was just as crucial in the playoffs, scoring 20 total points with five goals and 15 assists. Now, staring down a tough salary cap situation for the team that drafted him, Carlson has a lot to consider.

"I don't know, we'll see what happens," he said, reflecting on the situation. "We'll talk and go from there. I don't really know what else to say other than that...I don't know. I haven't talked to anyone, so I don't know what you would like me to say, but I wish I had all the answers, but it will be a process to get those answers.

"I love it here, I want to stay here, but there's more to it than that."

Carlson averaged $4 million per year over the course of his last extension, and his salary could double this offseason. The Caps reportedly have about $11 million if the salary cap doesn't change this offseason, but it is expected to increase to give them perhaps $14 million to $19 million of wiggle room. If that happens, the Caps stand a much better chance of retaining him.

"This has been my home. I've lived here every summer since I've been here," he said, his voice wavering. "This is my home base and obviously the guys that I've been around and the experiences that we've had...I love the area and this is all I know."

Carlson remains the only Caps player to make his full-time home in the D.C. area, ensuring that when he gets his day (or more) with the Stanley Cup, it will be somewhere in the D.C. area. But just like the important aspects of his future, Carlson said he doesn't know how he'll spend that day. Instead, he just smiled, shook his head and moved on to the next question.