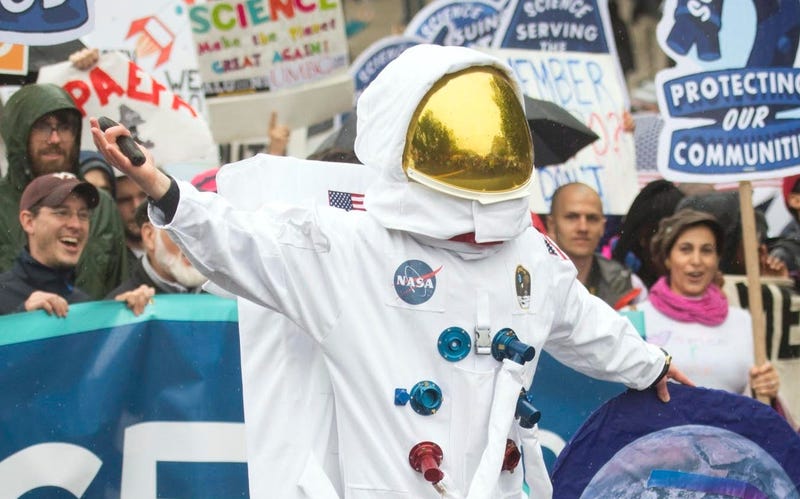 "Hey, you guys, you know what would be a fun and original bit?" a Tampa Bay Lightning fan probably asked his friends. "To pay top dollar for seats next to the Washington Capitals' bench and dress as an astronaut."

And so this guy paid a lot of money, donned his spaceman suit and showed up next to the Caps bench:

An astronaut is taunting Braden Holtby at the Caps bench pic.twitter.com/6ObNL5PNEJ

The astronaut next to the Caps bench haha pic.twitter.com/Ht1LwaLuBp

There is an astronaut next to the #Caps bench. That’s all I got. pic.twitter.com/BtL7emG7K5

So, this guy is probably going to be pretty disappointed when he learns this idea is a re-tread at best.

In 2011, Dan Steinberg of the D.C. Sports Bog wrote about the "Capstronaut," a Caps fan who wore a suit vaguely resembling a space suit during the 2010 season.

The obscured super fan ended up being Geoff Dawson, who discovered what anyone in an astronaut suit learns: it's hard to breathe, it's hard to see, and it's really hard to drink beer.

If this guy is a Lightning fan, he's going to want to knock back a few brews tonight.

It's interesting to ponder how, in today's world of increased security, this guy can get his suit through the metal detector. Even if it's mostly made of plastic, that has to create a logistical nightmare at the door.