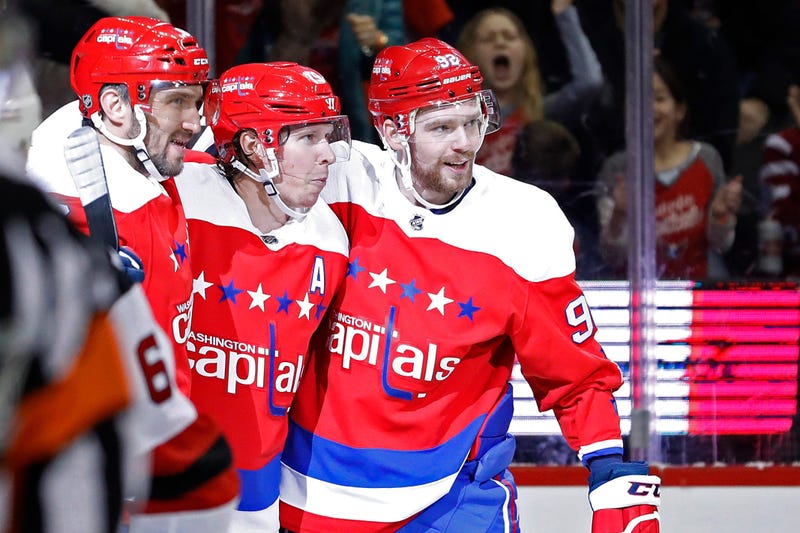 At this time last year, the Caps annual berth in the Stanley Cup Playoffs was met with a large yawn. Sure, they had won the Metropolitan Division for the third-straight year and then they were down 2-0 to Columbus with two overtime losses at home.

Now, the march to Lord Stanley begins as defending champions and a huge target is on their back.

First up: the Carolina Hurricanes.

Who can help carry the Capitals into June so they can chant “back-to-back-to-back” or “three-peat” at another parade? Here are the Magnificent Seven:

Alex Ovechkin: The captain and Conn Smythe (NHL Playoff MVP) winner was a different man last year. He was brilliant offensively to help the Caps win a Stanley Cup, but his buy-in defensively and leadership separated Ovechkin. He blocked shots, he chased down breakaways (to save Game 5 of the Cup Final), and would not be denied.

With a grand piano off his back, what Ovechkin will show up in the playoff run this year? With 15 goals and 12 assists, along with a +8 rating in 24 games – the “Great 8” averaged more than a point per game. His 15th goal of the playoff gave the Caps a lead in Game 5 of last year’s clincher.

Ovechkin showed up in terrific shape after a short summer, scored 51 goals while playing in 81 games and only missed one game, while serving a suspension for missing the NHL All-Star Game. He’s the third-oldest player in NHL history to score 50 goals.

Evgeny Kuznetsov: The “Bird Man” was phenomenal in the Stanley Cup Playoffs last year with 12 goals and 20 assists. His 32 points and a +12 in 24 games put him in a special category.

Kuznetsov delivered the goal heard around the hockey world to finally eliminate the Penguins in overtime on the road and put the Capitals in the Eastern Finals.

The only thing he didn’t do well last year was win face-offs at a playoff clip of 38.2 percent. It’s never going to be his strength. He finished the regular season at 36.9 percent and it will be a huge issue for the Caps, especially without Jay Beagle on this year’s team.

During the season, Kuznetsov was up and down. On the road, he only scored four of his 21 goals. After scoring five goals in 10 games in October, Kuzy scored only FOUR goals combined in the next three months or 34 games. In the final 32 games, starting February 1, he scored 12 and was dominant at times.

Kuznetsov played very well in big games down the stretch against Tampa and Carolina. If he’s that Evgeny, the Caps will go deep. If he’s not engaged, they’ll be home for the summer sooner than later.

Braden Holtby: The “Holt-Beast" was fabulous in the playoffs last year after replacing Philipp Grubauer in Game 2 of the opening round. He made “The Save” to rob Alex Tuch in Game 2 out in Las Vegas to preserve a win and never looked back. Holtby, this year, is the unquestioned starter and finished the regular season with a 2.82 GAA, a .911 save percentage and 32 wins in 59 games. The numbers weren’t overwhelming, but he finished strong with 26 wins and a 2.45 GAA/.922 save percentage against Eastern foes, to lead the NHL in those categories.
Nick Backstrom: The Capitals best two-way player. Backstrom’s line (paired lately with Ovechkin & Tom Wilson) is often tasked with neutralizing the opponent’s first line. The Swedish born Backstrom had 23 points in 20 playoff games last year, missing the clincher of the Pittsburgh series and first three against the Lightning.

He was a minus 1 player overall during the run and won 51.7 percent of his face-offs. The Caps need Backstrom to be even better than that to help carry the load.

Jakub Vrana: His breakout came last year after a disappointing start to the playoffs and a Game 2 benching during the Columbus series. While he only had eight points (three goals, five assists), he scored the opening goal on a top-shelf snipe in Game 5 of the Stanley Cup Final. Vrana was a +8 overall and this year played in all 82 games, scoring 24 goals with 23 helpers and a +20, becoming a steady, responsible force on the Caps second line.
T.J. Oshie: Oshie cannot be measured in just scoring output. His leadership, hustle and energy is impossible to calculate but you see it constantly, if you’re paying attention. He digs pucks out of the corner, forces turnovers, hunts down the opposition on the fore-check and might be even more critical from the high slot on the Caps power play than anyone.
John Carlson: The Caps best defenseman, who has only become better and better in his own defensive zone over the last two years. He’s a crucial component with the extra-man advantage but as of now, it seems that the plan is to pair him with recently acquired defenseman Nick Jensen, on the top defensive group. That means Carlson has to play a different position & that could cause issues.

Carlson had five goals and 15 assists in 24 games during last year’s Stanley Cup run, while racking up a +11, averaging more than 25 minutes per game on ice.